With few pest and disease problems, these tart, citrus-flavored fruits are easy to grow organically. 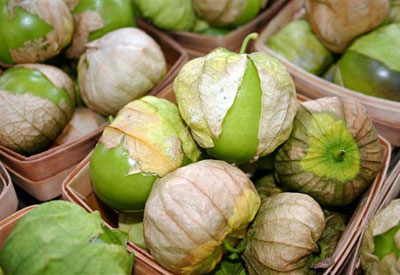 There’s a simple reason I spent all those years avoiding growing tomatillos: ignorance. Once I learned more about their culinary uses, once I learned how easy they were to grow, well, things changed. With all those peppers being harvested and home growers steaming up their kitchens while making salsa verde, now is a good time to talk about those husk-covered garden fruits that look like little Chinese lanterns as they mature on the vine.

Lover of Mexican food that I am, I’d been eating tomatillos for years without paying much attention. Sure, they’re an integral part of green salsas, both cooked and not. But they’re also great in chile stews where they can smooth out the flavor and tamp down the heat. They’re also good used in other types of food, such as chutneys. And tomatillos are a good source of nutrition. They have 7 mg of Vitamin C per fruit (nearly 20% of your daily requirement in 100 grams) and more minerals per equal weight than tomatoes. They’re also a good source of antioxidants and contain small amounts of vitamin A, zeaxanthin and lutein, things important to your visual health. 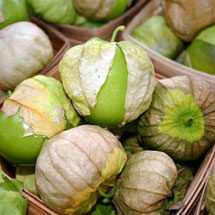 Yellow, green, or purple, tomatillos are the basis of great salsas, sauces and jams.

Yellow, green, or purple, heirloom tomatillos or husk tomatoes are the basis of great salsas, sauces and heady jams. Planting instructions are included with each ​seed ​packet and shipping is FREE!

But what really sold me was how easy they are to grow. My friend John up in Montana always had success with heirloom tomatillos despite the cool nights and short season, even during years when tomatoes didn’t do so well (tomatillos, however, will not tolerate frost). John is also an excellent cook and the dishes he made with tomatillos sent me into ecstasy. Like tomatoes, start plants indoors and transplant to the garden after the last frost. They need plenty of room. Jere Gettle of Baker Creek Heirloom Seed suggests spacing plants two feet apart in rows separated by five feet, but if you don’t have that much room don’t be afraid to crowd them a little closer. If the vines are too tightly crowded they’re more apt to develop blight or other foliar diseases. Some growers suggest they shouldn’t be staked; others say staking helps keep slug and chewing insects off. Either way, pests don’t seem to like the plants much, something that’s always a bonus for organic gardeners. We’ve found that staking makes the fruits more visible and easier to pick. The Iowa State University Extension suggests one to one-and-a-half inches of water a week. Those of us who don’t measure will water them like tomatoes, not letting the ground dry out deeply before watering. Mulch? Of course.

We’ve found that which type of tomatillo you plant does make a difference, especially in the kitchen. There are bright purple tomatillos which add visual interest as well as sweetness to your salsa, and a pineapple variety that adds a bit of its namesake’s flavor to the dishes it appears in. All are fairly prolific — even in northern regions you’ll get 50 or more fruits to a plant — but our sources tell us that the Toma Verde is the most prolific. Harvest when the paper husks start to yellow and are loose and crinkly around the fruit. It’s okay to harvest a little early though the green fruits will add a bit of tartness to you salsas and sauces. Kept in their husks in a brown paper bag, tomatillos will last a month or more — often until Thanksgiving — in the refrigerator. Roasting the tomatillo gives it an extra dose of flavor. And there’s nothing better in those late, tiresome days of winter than opening a jar of tomatillo and green chile salsa you canned yourself. It’s like having an edible memory of your summer garden, with all its flavors and nutrition, just when you need it.