Keeping livestock-generated super bacteria out of your organic garden. 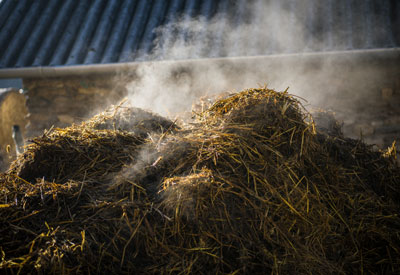 It’s common knowledge that the commercial livestock industry stuffs its cattle, hogs and chickens with antibiotics. A new study shows just how dangerous the practice is. A review of 440,000 patient records in Pennsylvania found that those who lived near farms and areas where manure was dumped were 38 percent more likely to develop a MRSA infection. MRSA is one of the most insidious and deadly antibiotic-resistant infections confounding the medical world today. The bacteria attacks skin and other soft tissue.

The study has important implications for growers and family gardeners who purchase and use steer and other types of manures — or commercial compost containing manure — for garden use. Working with or near such manure could unnecessarily expose you to MRSA and other antibiotic resistant infections.

Resistance to antibiotics is a growing problem that puts much of our medical treatment, especially hospital stays, in jeopardy.

It’s estimated that 70% of the antibiotics used in the United States are given to farm animals. Why? Factory farming of livestock, now so prevalent in our country crowds animals together by the thousands in small enclosure. The antibiotics, claims the industry, are necessary to prevent the spread of disease. Antibiotics also encourage quick weight gain, a reason we suspect that corporate agriculture continues to administer the antibiotics so effusively.

There was a small flap over the use of antibiotics in hog confinement farms in 2007 when a University of Illinois study found that genetic material that led to resistance of bacteria to the antibiotic tetracycline was leaking into groundwater from the hog factories’ waste storage lagoons. The topic of antibiotic resistant infections and their link to factory farming occasionally surfaces but the topic never seems to gain celebrity status.

It isn’t just farmers that are exposed to manure high in antibiotics and drug resistant bacteria. If you use manure from a commercial dairy make sure those milk cows aren’t fed antibiotics. Some of the resistant bacteria has even shown up in cow’s milk (pasteurization should render that bacteria harmless). But the fact that it can be found in cows giving us milk and the milk itself before pasteurization should be cause for concern, especially when considering the less-than-sanitary conditions at some commercial dairies (unsanitary dairies and the lack of inspection created a frightening controversy back in 1991 . . . not much has changed in the inspection department since and monitoring might even be worse due to state and federal cutbacks ).

The effects of this study on home gardeners calls for care. Don’t use any commercially obtained manure in your compost unless it’s pasteurized (trusting that pasteurization claim is up to you). If you obtain manure from a friendly nearby farmer, make sure he follows organic practice, or at least doesn’t feed antibiotics as a rule to his animals. We’ve often warned of what might be lurking in any commercial compost you purchase. The best solution is to make your own, from materials you’ve sourced yourself. It’s also important that we raise our voices against the indiscriminate use of antibiotics in factory farming. It’s an issue that affects all of us — man, woman, and child — by putting our health at risk and it’s way too important to ignore.