Why You’ll Always Have To Grow Tomatoes

... or buy them from your small, local organic farmer. Answer: that homegrown, heirloom tomato flavor. 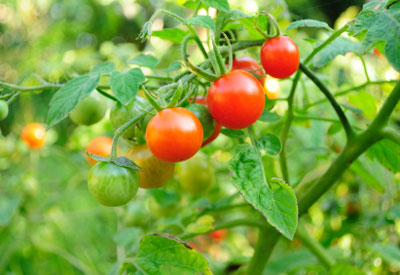 “It’s difficult to think anything but pleasant thoughts while eating a homegrown tomato.” — Lewis Grizzard

This article on efforts to produce a tastier commercial tomato is, frankly, sad. We all know the problem with grocery store tomatoes (PDF): they’re bland if not completely tasteless. Compare them to the most mediocre tomato grown in someone’s back yard and that mediocre tomato shines by comparison. Compare them to any decent, heirloom tomato from your garden or a small, local, organic farmer and, well, there’s no comparison.

Not only do homegrown and small farm organic tomatoes taste better than commercial tomatoes, they have more nutrition.

With the right tomato gardening supplies growing organically is easy! Planet Natural has everything you need ​for early season growth and healthy, flavorful harvests. Need advice? Our Tomato Gardens Blog provides articles and advice to fulfill your quest of growing the perfect crop.

So you have to feel bemused if not sorry for professor Harry Klee at the University of Florida’s Institute for Plant Innovation program. Sure, his goals are admirable: he’s trying to “build” a better supermarket tomato. That means more flavor. And there’s nothing wrong with that. And he’s going about it very scientifically. He extracts the “flavor compounds” in tomatoes, separates their various components, and then studies them genetically in an attempt to duplicate them in commercial tomatoes. While he studies the genetics of these tomato components, he isn’t out to genetically modify tomatoes. Instead he uses standard hybridization techniques, albeit in the laboratory, in an attempt to create commercial tomatoes with improved taste.

And there’s the rub. Dr. Klee is trying to retain all the traits developed over the years that commercial growers love–firmness, a slightly square shape (allowing for denser packing), shipping and survivability traits, enticing red color (even when the insides aren’t ripe), and long shelf-life. These trait all compromise flavor (so far). It’s estimated that even Dr. Klee’s best attempts will only be 75% as flavorful as a common tomato grown in the family garden. And then there’s the loss of flavor suffered by tomatoes from refrigeration during shipping.

You might say that Dr. Klee is on a fool’s mission. Will he really be able to keep large agricultural growers happy considering the fact that they haven’t seemed to care about flavor up until now? Will they compromise on anything to gain a little more flavor? As the article says, “As growers are paid by the pound, a better-tasting but less productive tomato holds little economic appeal.”

None of this is to disparage Dr. Klee. He was recently elected to the National Academy of Sciences for his research and his ultimate goal — to encourage people to eat more nutritious foods (like tomatoes) — is a worthy one. But even some of his colleagues are skeptical. “I don’t think the taste of tomatoes is going to be fixed by molecular biologists,” said David Francis, a professor at The Ohio State University who has bred and released several tomato varieties, “because flavor is a lot more complicated than manipulating one or two genes.” In other words, it’s like taking apart a watch to see what makes it tick. Once you lay out all its various parts, all you have is silence.

And while Dr. Klee isn’t planning to genetically modify tomatoes to reach his goal, he is using genetically -modified tomato plants to test what he determines to be true. If I were him, I wouldn’t let Monsanto catch wind of it. Oh wait . . .

The important thing to remember here is that we already have sources of healthy, nutritious, and delicious tomatoes. Right now, America’s gardens are bursting with rich red ripe tomatoes (okay, if you live in Zone 4, those tomatoes may still be green). And Farmer’s Markets across the country are overflowing with heirloom tomatoes just waiting for the slicing. Sure, they might not be perfectly and evenly red. Some of them may be green or striped and some like the violet jasper may have a ruddy unevenness. But sliced out on a plate and topped with a shaving of Parmesan and some basil leaves they just might be the most beautiful thing you’ve seen this summer other than you wife and children. And taste? No comparison.