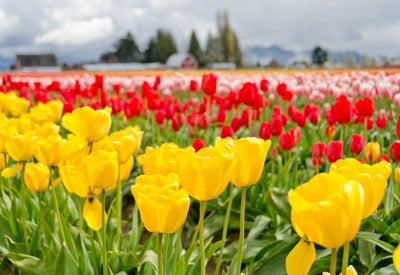 It’s Tulip Festival month in the Skagit Valley of Washington state, one of the country’s primary tulip bulb production sites. Long before those bulbs are harvested, acres and acres of the tulips flower. When they do hundreds of thousands of visitors come to see the richly and variously colored blossoms on a scale that’s hard to imagine.

Planet Natural’s Pacific Northwest correspondent reports that when the flower-lovers show up, usually in the month of April (flowering came as much as two weeks early this year), they boost the local economy in ways that benefit everything from roadside stands selling rhubarb to nearby motels and restaurants. Towns in the vicinity hold Tulip Festival art shows, musical performances, and garden sales. The tulip growers themselves have gift shops and charge for tractor-drawn “cart” tours. Neighbors get $5 for letting people park in their yards.

The event is truly a green — and red, yellow, and deep purple — economic stimulus.

Garden tourism has a grand tradition and its economic values have long been recognized. There are international societies devoted to making “garden and horticultural experiences … part of the mainstream tourism appeal.” The North American Garden Tourism Conference was just held in Toronto and public gardens everywhere are encouraging spring visits. There are even blogs — of course! — designed to help the curious find and learn about public gardens.

But today there’s more to garden tourism than visiting intriguingly landscaped and historical public gardens. Visitors are being drawn to places where they can buy produce direct from their local, often organic farmer. Kids see where their food comes from and how it’s raised. Goat dairies, especially ones where there’s potential for petting and other kid-animal contact, are especially popular.

The foodie trend overlaps nicely, and those interested in the culinary arts, professional and otherwise, take weekend trips to areas with organic dairies, grass-fed beef operations, and organic produce raisers. Often, this includes visits to area dining establishments of all sorts, from barbecue trucks to fine country dining establishments where herbs and greens are grown right outside the kitchen door. Restaurateurs are known to escape the big city and open small destination cafes next door to the farms where they source their raw ingredients.

That’s what’s happened in the Skagit Valley, making it a year-round destination for those heading north from Seattle and South from Vancouver. In addition to tulips, wheat and corn are raised in the broad, sea-side area, and dozens of small and organic produce growers thrive. The tiny, bend-in-the-road town of Edison seems completely devoted to local foods with a natural bakery, a wine-and-cheese store, and a handful of restaurants serving local fare as a matter of course. The channel-side town of La Conner, near the tulip fields, has a number of fine restaurants featuring farm to table menus.

The area borders the Salish Sea north of Puget Sound and is known for its shrimp, crab, and salmon as well as shellfish farms. There’s hardly a place around where you can’t get a local oyster or bowl of mussels.

Not only are people drawn to fine dining, they’re drawn to the area farms and homesteads where organic produce of all kinds is sold. Often, growers are first met at local farmers markets and patrons are invited to come out and visit the farms.

Even now, roadside stands are popping up with fresh-picked asparagus for sale as well as bedding plants, organic eggs, and, of course, tulip bulbs. A handful of nurseries, seemingly in the middle of nowhere, offer organic and landscape plants.

There’s even a monthly newspaper, with website that carries news on local growers, sustainable agriculture, and healthy cooking. It’s pages are filled with announcements and advertisements from farms, feed and supply stores, various farmer’s markets, and, of course, the local restaurants.

You might say they’ve got something of a scene happening.

The folks in the Skagit Valley knows what drives their economy. They also know the best way to preserve their local heritage. They’ve made unusual efforts to sustain their farmland and protect it from development.

Small farming is never an easy path to business success. Farm-to-table tourism helps generate what it takes to keep growing. And when that growing is organic, it’s also a big boon to the environment.

Of course, there are many other areas that promote this farm-to-table tourism, some of them in farm country where big agriculture dominates. This is encouraging in a number of ways, not the least of which is that people are turning to more healthy, more sustainable eating. And they’re learning about the best ways to do it.

Is it foolish to imagine a day when America’s food industry will again be dominated by small farms and conscientious farmers rather than mega agricultural conglomerates and chemical companies? Maybe not.