Is it okay to put coffee grounds in my compost pile? How much is too much? 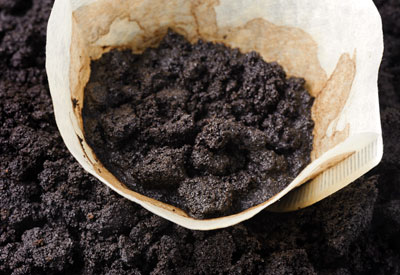 One of the more interesting blogs out there has a pdf paper on one of those consequential issues of interest to inquiring gardeners: coffee grounds.

The blog is horticulturist and associate professor at Washington State University’s Puyallup’s Research and Extension Center Linda Chalker-Scott’s “Myths, Miracles … or Marketing?,” a series of papers that explores the research on such timely questions as the effectiveness of wood chips as mulch (PDF) or the risks of using water retention crystals known as hydrogels (PDF).

Chalker-Scott, who has also written an equally interesting book, The Informed Gardener, has a great way of exploring her well-chosen subjects, first reviewing studies on the topic, then drawing common-sense conclusions directly applicable to gardening.

The issue she addresses here is a familiar one to gardeners: the use of coffee grounds as a soil amendment. Are they too acidic? Do they really kill slugs and discourages certain diseases? What value do they have when added to the compost pile?

Convert kitchen, yard and garden waste into soil-nourishing organic matter with our backyard tested composting bins and supplies. Decreasing household waste and building your soil has never been so easy!

Gardeners who’ve been around for awhile have been adding grounds to their compost piles for years. Coffee grounds have long been popular additions to worm bins. I remember buying a dozen worms at the bait shop when I was a kid and what did they come in? Coffee grounds.

Not only have we always added coffee grounds to compost (and lately, the brown, unbleached coffee filters we use to make our joe), we side-dressed our acid loving plants including azaleas, gardenias, and rhododendrons with it. We never had enough grounds to use it elsewhere as mulch. We thought it too acidic for that use anyway.

But our mulching philosophy changed when Starbucks (way back in 1995) and other coffee shops began offering their grounds, nicely bagged and often for free, in quantity. Suddenly coffee grounds were being used to mulch all kinds of plants, acid-loving and not.

Chalker-Scott reports that the research on the acidity of coffee grounds shows that yes, the grounds can be acidic, but often minimally and sometimes not at all. The acid levels aren’t fixed but vary as the composting process proceeds, especially if there are worms involved.

When composting, she recommends that gardeners add no more than 20% of their total compost volume in coffee grounds. Levels as high as 30%, she suggests, can be “detrimental.”

On the other hand, she discourages gardeners from using coffee grounds as mulch, even on azaleas, but not because of their acidity (or lack of it). Coffee grounds are:

. . . finely textured and easily compacted. Compacted coffee grounds create a barrier to moisture and air movement. Therefore, I recommend against using pure coffee grounds as a mulch; instead, try using a thin layer (no more than half an inch) of coffee grounds and cover with a thicker (four inches) layer of coarse organic mulch like wood chips.

As far as disease suppression, something we hadn’t considered when we first started composting grounds, she found that indeed coffee grounds discouraged fungal rots and wilts, including Fusarium, Pythium, and Sclerotinia species. Less may be more in this case. As little as 0.5% grounds in compost had the disease inhibiting effects.

Sunset magazine put some of Starbucks coffee grounds to the test at a soil lab. You can see the breakdown of that analysis here. Their conclusion?

Based on the overall chemistry and physical properties of the coffee grounds, they can be utilized at rates similar to other organic amendments when used in amending mineral soils. These data indicate that 25-35 percent by volume coffee grounds can be blended with mineral soils of any type to improve structure of those soils.

Coffee grounds aren’t the only part remaining of coffee beans that gardeners use. Some roasters offer coffee bean hulls or “chaff,” the bean coat or skin that’s shed during the roasting process. Chaff adds nutrients to compost as well as bulk, improving soil texture.

No one needs to tell you this part: putting coffee grounds into compost not only makes for good compost. It keeps them out of landfills. Though we have no figures, we’ll guess that considering the amount of coffee consumed in this country, that’s a lot of grounds — I mean ground — being spared.

One Response to “Coffee Grounds and Compost”