Bee deaths accelerate again this year. Why are they dying at such an alarming rate? 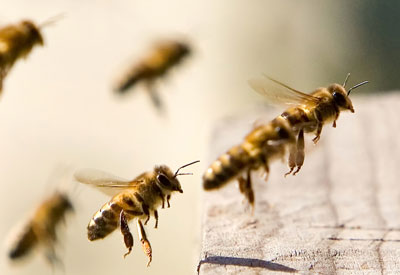 Beekeepers lost over 42% of their colonies in the 12 months that began in April, 2014. This came after a year when total winter losses were 23%, less than the 30% average losses per year since 2005.

The figures come from the Bee Informed Partnership, a collaborative effort between university research laboratories, the United States Department of Agriculture, and the National Institute of Food and Agriculture. The Partnership is dedicated to studying bee health on a “large scale” rather than in individual lab experiments. And that means data collection.

The Partnership emphasized that the results of their latest study were preliminary and may change as more data comes in.

The dying bees are a disappointment after a year that suggested to some the worst of the colony loss epidemic may had passed. Those pesticide companies that blamed colony collapse disorder on the varroa mite parasite saw proof they were right in the 2013 results.

Research consensus is that a combination of factors, including the mites, loss of forage habitat, and pesticides — specifically neonicotinoid pesticides — are at play in bee deaths. Pesticide manufacturers have touted the varroa mite as the main culprit. But research tends to show it’s the pesticides.

In 2013, the European Commission, citing their threat to honeybee populations, banned three neonicotinoid pesticides from use in the European Union.

The Bee Partnership report contains one unusual result: the high percentage of bees dying over the summer. Summer losses totaled more than 27%, up from 19.8% the year before. It was the first time ever that summer losses exceeded winter losses.

The Partnership report offers a revealing chart (scroll down) of winter, summer, total, and “acceptable” losses dating back to 2006.

Dick Rogers, chief beekeeper for pesticide-maker Bayer, said the loss figure is “not unusual at all” and said the survey shows an end result of more colonies now than before: 2.74 million hives in 2015, up from 2.64 million in 2014.

Of course, beekeepers are always raising more bees come spring, dividing the surviving hives and forcing the development of new colonies. But ask any beekeeper if 40% colony loss (or 30% for that matter) is acceptable and see what they say. The Bayer spokesperson’s “not unusual at all” is uninformed and insulting.

Yes, landscape forage for all pollinators needs to be encouraged, especially in the face of continuing rural development. And it would be a breakthrough if there were a way to effectively control varroa mites that didn’t require chemicals with their own set of evils.

But to look for blame elsewhere and suggest — “no problem here” — we move on from consideration of a neonicotinoid ban, well, that almost seems criminal, especially in light of the dangers neonicotinoids may pose to human health.

One Response to “Bees In Peril”