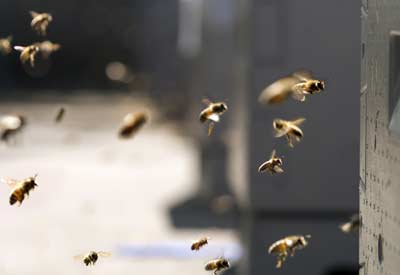 Your friendly Planet Natural blogger doesn’t like to think of himself as the cynical sort. But then you read something in the news and can’t help but shake your head. It seems that the Bayer CropScience corporation, the manufacturer of neonicotinoids, a type of pesticide that’s been implicated in the colony collapse disorder that’s decimating bee populations around the globe, has taken it on themselves to find the “real” culprit in bee decline. And what have they come with? It’s the varroa mite!

While the mite has long been a foe of bees and beekeepers, its presence doesn’t explain the extreme decline that bee colonies have suffered in the last several years. Many scientists, and many more beekeepers believe that the relatively new class of chemical known as neonicotinoids is responsible. The European Union recently banned the chemicals so that its effect on bees could be studied.

You can guess how Bayer and the other neonicotinoid makers have reacted to the ban, and why. According to The New York Times:

Worldwide sales of the pesticides total in the billions of dollars. Two companies that make them in Europe, the German giant Bayer CropScience and Syngenta, a Swiss biochemical company, have said they were willing to finance additional research, but that the current data do not justify a ban.

Bayer has responded in the same way that corporations typically deal with allegations against their products. They started a public relations campaign! (And yes, for those of you who guessed they start a legal challenge, you’re right as well.)

Bayer wants us to believe they care for bees. They’ve created the Bee Care Center on their grounds in Germany where you can learn about these important pollinators and buy cups and t-shirts sporting their image. There’s also an educational component. And what you’ll learn is that the varroa mite is the cause of bee colony collapse. In one of the displays at the Bee Care Center, there’s a large replica of a mite. Bayer is funding studies looking to blame and control the mites. Conveniently, Bayer also produces the products designed to kill the mites.

A U.S. version of the Bee Care Center is planned for Raliegh, N.C. We urge you to read the entire article to get the complete cynical effect.

The “we-love-bees-and-hate-mites” push comes at a time where more and more studies are showing just how harmful neonicotinoids, especially clothianidin, are to bees. Equally troubling — more so, really — are the reports that these chemicals threaten human health as well.

It’s good for those of us dedicated to organic growing to remember why we’ve committed ourselves to the practice, whether in our own yards and gardens as well as in the larger world of commercial agriculture. We need bees to pollinate our crops. Without them, the world might starve. Bees are also a sort of canary in the coal mine, an advance warning of what might, maybe already is, happening to the human colony as a result of the widespread use of dangerous pesticides. It also reminds us of what we’re up against. Anytime corporate profit is at stake, concerns for the well-being of bees, humans, and everything else, goes out the window.

One Response to “Bee Decline and Chemical Companies”