How to attract bug-eating birds to your garden for organic insect control. 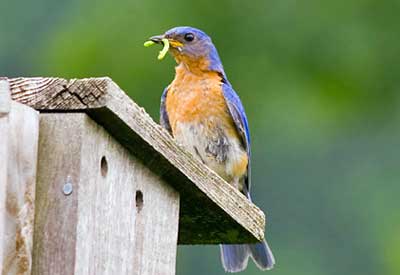 I’m recalling one of the great sights of spring gardening this cold February night: working the soil for the first time and having birds descend to pick out the slow moving grubs that had been hiding under the earth. Sure, the birds got a valuable earthworm or two, but not so many that it would dent the population. Those worms began to tunnel back almost as soon as daylight hit them. And many were still buried deep — very deep — where my turning fork couldn’t yet reach them. But those grubs, twisting and turning on top of the freshly spaded clods. They made for easy pickings.

Of course, that got me thinking about watching birds work the garden in the summer, feasting on insects, caterpillars, and whatever else they can find. In song and sight, birds are the most enjoyable part of any organic gardeners integrated pest management system. And they can also help with pollination. How to attract beneficial birds to your garden? Start now by putting out feed. In most places, February means natural food sources for birds are at their lowest. By feeding birds now — almost all eat seeds and insects — you’ll increase the chances of them returning to your yard during garden season. Feeding birds in the winter takes some knowledge. Luckily, the practice is widespread and you probably have a neighbor or friend who can tell you what’s best and appropriate for your area. Here are four birds that can help gardeners control backyard insect pests

Birds can be valuable to gardeners in controlling insect pests and they’re also critical to the well-being of our forests. I remember an old Nebraska farmer I once worked for, a man of few words, telling us what a joy it was to cultivate in the spring with a cloud of birds trailing behind, swooping down to feast on the insects and weed seed exposed by his plowing. It reminded him of the fishing boat he was on once during a rare vacation, how the gulls trailed behind the motor’s wake to pick up what it churned from the sea.

Birds may be the organic gardener’s best friend. In turn, the organic gardener is a friend to birds. It’s no secret that we’re reducing the population of this natural predator with insecticides. The Smithsonian Nation Zoological Park Migratory Bird website reports that up to 67 million birds are killed in the U.S. each year due to agricultural pesticides and that over 150 bird die-offs, some involving as many as 700 birds, have alone been attributed to diazinon, the organophosphate insecticide commonly used on America’s lawns.

Worried that feeding birds may make them dependent on your generosity? Studies reported in Audubon magazine show feeding doesn’t necessarily harm birds and may help them immensely during extremely cold and long winters. On the other hand, you don’t want to discontinue feeding in February when conditions are at their worst. Here are ten tips for winter bird feeding from the National Wildlife Federation. And here are specifics for feeding birds in winter from the Minnesota Department of Natural Resources, a group who knows a thing or two about long hard winters. And consider planting sunflowers this year to help attract birds that also feed on insects. You — and the birds — will be glad you did.

One Response to “Controlling Insect Pests With Birds”