How Do Earthworms Survive Winter?

Hint: It's the slime. 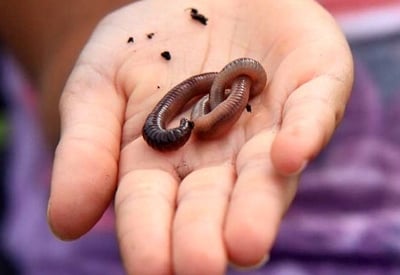 Maybe your friendly Planet Natural blogger ate too much pie. But during a free hour in our recently passed holiday, he sat quietly — no football, no television — and thought about his garden and the ongoing cold snap. Then, as Dr. Ray Stantz (Dan Aykroyd) says in the film Ghostbusters, it just popped in there. What happens to worms in winter?

Now every gardener loves earthworms. They’re tunneling helps keep your soil porous and conduct moisture. They feed on decaying matter, leaves and other plant matter, as well as fungi, bacteria and nematodes, then excretes them as vermicompost or worm castings, one of the most potent soil amendments there is. As the Penn State Extension puts it, both the structure and fertility of your garden soil are in the care of earthworms.

Convert kitchen scraps into soil-nourishing organic matter with our home tested worm bins and supplies. Decreasing household waste and building your soil has never been so easy!

But what happens when the ground freezes solid and they’re unable to go their way feeding through it? Do they just die off? Do they burrow down deep enough to reach some warm, worm paradise, heated by the earth’s molten core?

This last explanation came from my nine-year-old fellow curiosity seeker — she’s very into science fiction — when I later posed the question to her. She knew what to do and soon called up answers on her brother’s lap top (don’t tell him). Here’s what we found.

Earthworms in winter, like earthworms during drought (dry soil conditions), burrow deeply. Night crawlers, the biggest of the garden worms (at least in my neck of the woods) will tunnel as much as six feet down, taking organic matter with them. There they build permanent burrows and wait for moisture.

All earthworms do more than just burrow to escape frozen ground. Once down as deep as they will go, they curl up tightly, surrounding themselves in insulating slime. In summer, during hot and dry spells, they enter a hibernation-like state known as estivation. In winter, the worms hibernate, waiting for soil to thaw before moving upward.

Anyone who’s handled earthworms is familiar with worm slime. That slime not only helps keep the worm warm (say that ten times real fast), it’s a boon to the soil. Worm slime is high in nitrogen and also helps bind soil particles for good soil texture.

The Kansas State University Research and Extension service says that earthworms can freeze entirely and be slowly thawed back to life. My nine-year-old scientist quickly hatched a study that involved a bag of worms and mom’s freezer. Luckily, that will have to wait until next spring.

Another thing we found that’s interesting: keeping worms in your basement to make compost of your kitchen scraps. They won’t freeze to death down there.

By the time my nine-year-old researcher and I had learned all this, it was dark and time for a sandwich of the kind that only comes around once a year: turkey, cranberry sauce and stuffing. As you might guess, those around the dinner table with us weren’t so excited about our sharing our worm knowledge with them as we ate.

Our little researcher confided some other fascinating information to us. There are two types of kids: those who love worms and those that hate them. I don’t need to tell you which kind she was. When I told her I would write our experience up for the Planet Natural Blog, she made a suggestion that I include a link to this website which talks about all kinds of wormy things. “You know,” she said, “kids want to know a lot more about worms than just what they do in the winter.” “So do gardeners,” I replied.