Here's our go-to guide for anyone interested in foraging foods for your table. 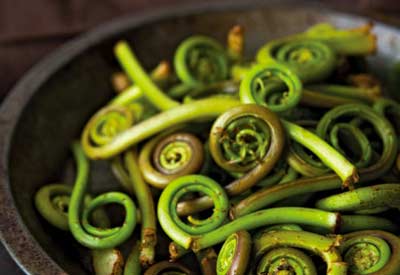 Spring is a wonderful time of year for foraging wild foods. Greens — dandelions, nettles, wild asparagus, miners lettuce, ramp — are especially fine this time of year and spring mushrooms notably morels, rival the mushrooms picked in the fall. Some wild plants, including fiddleheads, are edible only when they first emerge (and one should be cautious eating even these). Even though nature is doing the gardening for you, it’s important to remember that you want even your foraged plants grown the way you grow in your garden. Organically.

We’ve been amazed at the interest in wild foods that’s grown over the last few years. There’s been a plethora of books released on the subject and classes on identifying, picking and cooking with foraged foods are offered in both rural and urban locations. Even restaurants and gourmet chefs, long-time users of wild mushrooms, have gotten in on the fad, flavoring their dishes with wild greens. Ramp, that favorite east coast spring green that was once harvested by eager Italian immigrants and seen as a measure of class distinction, is now so popular now that it rates a kitchen story and recipes in a major American newspaper.

Your friendly Planet Natural Blogger, always a connoisseur of wild mushrooms, didn’t really consider himself a champion of foraging until he started to think about it. Maybe it was that one bad, bitter experience with something that an “expert” had assured us was miner’s lettuce. Maybe our expert wasn’t so expert after all. Most likely what we ate was miner’s lettuce. But it was past its prime. Even garden lettuce turns bitter when it gets past its prime. And think of dandelions. Their pleasantly sharp flavor is a great — and nutritious — addition to spring salads. But later on in the season when the leaves have gotten big, the plants have gone to seed, and they excrete a milky substance when picked? No thanks.

But then we started to recall all the foods we have gathered and eaten. Mushrooms, of course; wild onions from high mountain ridges, wild garlic from the woods, wild cress from stream banks. Our all-time favorite has to be the stinging nettle. When nettles started to emerge around the old barn on our organic homestead it was time for rejoicing. Mostly we ate them steamed or boiled , like spinach. It only took a few moments of cooking for them to lose their sting. And drinking the pot liquor that came from boiling a mess of nettles — it’s both a tonic and cleanser — became a spring ritual. We even had a recipe for nettle wine. Here in allergy-inflicted northern New Mexico, teas made from dried nettle leaf are one of the most popular herbal remedies for watery eyes and all the sneezing that goes on.

But again, it’s important to know the wild foods you’re harvesting. Some plants are poisonous. And even if you know positively they’re edible, you’ll want to be sure they haven’t been sprayed with pesticides or herbicides. One guide we read encourages foragers to avoid areas where there are wilted or brown plants, possibly a sign of spraying. We don’t think that’s enough. Don’t pick anything unless you know for sure that the area in which you’re harvesting hasn’t been sprayed, be it the woods behind your house or your neighbor’s backyard. And if it’s a deserted city lot where you’re finding your purslane, make sure you’re picking it well away from where auto exhaust and other pollutants may have settled on it.

Once you know the area where you’ll be picking is safe, go for it. Yes, take along someone experienced to help you identify your foraged edibles. They’ll probably know the best way to prepare them as well. But there are few joys greater than consuming plants that you’ve picked yourself from nature’s bounty. Here’s an article from the father of harvesting wild food, Euell Gibbons (old timers will remember his line, “tastes like wild hickory nuts!”). And here’s a source for a bounty of good reading on the subject. Once again: don’t put anything in your mouth that hasn’t been positively identified as safe. You don’t want to be sorry (see miners lettuce above).