Artichokes From the Organic Garden

Planting and caring for artichoke plants -- as edibles or ornamentals -- in home gardens. 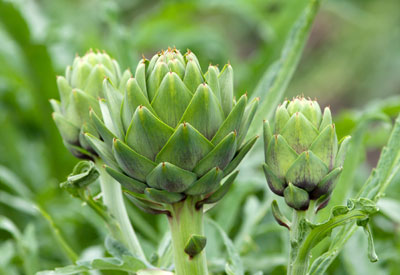 Artichokes, once the domain of cool, coastal climates and inland areas of moderate temperatures, are moving into gardens where they’ve never be seen before. Even Utah (PDF) is growing artichokes.

It may be that warmer, longer summer seasons are encouraging gardeners in zones previously not suitable to growing artichokes to try their luck. But there are other factors at play as well.

One of the reasons is the popularity of recently available heirlooms that are offered next to the classic “Green Globe” variety. Restaurants and gourmet growers are offering types of artichokes that were unknown not long ago. Seed companies are starting to carry these heirlooms as a matter of course. And some of it has to do with gardeners discovering the artichoke as a wonderful ornamental, its richly green fronds topped with spiky, often purple flowers.

OR maybe we’re just now discovering how delicious a homegrown artichoke — the bud before it flowers — can be.

Who knew that vegetables loved fish? Neptune’s Harvest is a top-selling Fish and Seaweed Fertilizer that uses North Atlantic ocean harvests for great results. This gentle blend is a simple way to give your plants the optimal nutrition they need.

As ornamentals, artichokes are a good addition to your water-wise, xeriscape garden. They need little water just to survive and maintain their beauty. It’s only if you’re looking for a harvest of their tender globes that you should pour the water to them.

Artichoke plants will grow quite large, their spiky, silvered leaves filling a wide space between other planting. They balance displays of color, the fronds seemingly pointing everywhere at once. And when the other flowers are gone, artichoke buds open their equally spiky, purple flowers, bringing a late season touch of unusual color.

Growing artichokes can be hit or miss, depending on where you live. The plant prefers Mediterranean-type climates with warm days and relatively cool nights. In these areas, artichokes are grown as a perennial, mostly from bare root stock and cuttings. They’ll produce crops for a few to several years if provided with plenty of organic material and water.

Places with real winters — meaning regular freezing temperatures — aren’t suitable for perennial growing. But you can still have artichokes. Grow them as an annual and start them indoors. Warm indoor temperatures encourage germination. Artichokes require plenty of light for quick growth. Growing them on a windowsill just won’t do.

Which artichoke you grow depends on your intent and conditions. Some varieties will survive as perennials — if well protected — down to zone 6, average last frost date May 1. And sure, with some luck, you can keep them alive in zone 5, helped by a heap of compost or soil under a hefty layer of mulch. Mild winters help.

Violet artichokes of different types are all the rage now. The Italian Violetto Precoce is a favorite with chefs now and often matures within 90 days. European types, like the French Violet de Provence have smaller buds that mature quickly. Cornell University has a long list of artichoke varieties and descriptions.

Begin hardening the plants off four to five weeks ahead of putting them in the ground by taking them outdoors to a protected area during the day (sunlight, but no wind) or placing them in a cold frame. Soil temperature should be up around 60 degrees when they finally go in the ground. Don’t be skimpy with space. Three feet between plants isn’t too much and two feet can be too little. Crowding encourages insects and helps disease spread. Be generous.

And let’s not forget the classic Green Globe artichoke, the one we’re all familiar with, qualifies as an heirloom, too.

Back when your well-traveled Planet Natural blogger lived in a California beach city, he had a huge gracious artichoke plant standing at the base of the steps up to the porch. It spread its silver spears in all directions and every year produced several bright purple blossoms. Later, we grew another in a deep pot, its leaves spilling over the sides. That years, we ate up its buds while they were still tightly closed. The next year, we grew another.

Here’s more about artichokes at the always dependable Texas A&M University Extension website. And let us know what’s in your artichoke heart here on on our Facebook page. 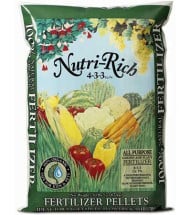 Includes essential nutrients and micronutrients that slowly release over time.