Is the farm bill money spent on promoting organics and locally grown foods worth it? 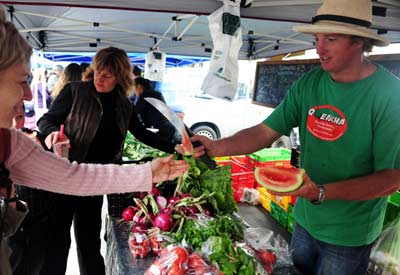 Your friendly Planet Natural blogger is all about assuring your family gets truly organic fruits and vegetables by growing them at home. But he’s also all about access to quality organic produce, raised on local farms and sold locally at co-ops, farm stands and store fronts, and at farmers markets.

No one I know grows enough of everything. Most of us with modest-sized gardens feel lucky if we can plant a couple short rows of sweet corn that yield enough ears for a big picnic and a couple family dinners. When we do buy produce — and we buy a lot of it with great joy — we want to now that it was grown naturally and nearby. It’s great to buy from a producer — a farmer! — that you know and trust.

Now even the federal government is acknowledging the interest in buying local food and organic produce. The Farm Bill passed by Congress and signed by the president in February, designated $291 million in support of organic growing. Over the next five years, $125 million will go to research on organics and $50 million will be directed at conservation efforts.

By contrast, $44.4 billion of the $956 billion farm bill is given to food commodity programs, guarantees that protect big agriculture from steep price fluctuations.

Now that the first $52 million of the United States Department of Agriculture’s push to support local foods and regionally distributed produce is in the pipeline. What are we seeing? A national farmer’s market database.

While the information there is impressive — there’s so much activity across the country — and we hope, up-to-date, we can see it being used only by guys like us who get a rush finding out there’s a farmer’s market in Ada, Oklahoma that runs all the way to November. Could the money be better spent?

When the USDA launched the “Know Your Farmer” program referenced above in 2009 there was grudging acceptance. Tom Philpott over at Grist felt both encouraged and skeptical. Follow his thinking and you’ll see a lot of it applies to the USDA’s farmers market site as well.

So maybe we should be encouraged that the USDA is showing some interest — the $291 million is triple that directed at local and organic growing in the last farm bill — even if non-organic, corporate farming, the kind so often seen in opposition to natural growing and conservation, is eating our lunch.

As far as wondering if the market database and the whole USDA local-organic program is worth it: We’ll reserve judgement until we see where the rest of the money is going. We can see where the database could be of value to vendors looking for regional markets. But farmers markets are pretty good about announcing themselves. More and more of them even have websites. Sure, there’s some value in a farmers market clearinghouse. But will they take on the hard issues?

Providing your family with healthy, pesticide-free food may be your principle reason for choosing organics. But there are a myriad of issues involved and the reasons for pesticide-free growing are many and complicated. We not only want healthy food, we want healthy water. We want our agricultural soil to be treated with respect. We don’t want to endanger birds and beneficial insects, we want to respect all wildlife; well, maybe with the exception of that deer who got in the garden and cleaned out our lettuce.

That’s why your thoughtful Planet Natural blogger gets interested in all types of food issues. We don’t care that you drink sodas full of sugar, even if some people are calling sugar a poison, or consume processed foods heavy with corn syrup. But we do care that much of that corn grown for syrup comes from genetically modified seed that encourages the use of harmful pesticide. Nor do we think it’s a crime to consider any links that our diets may have to our health. It might save us some money.

So yes, as folks who grow and champion local, sustainable, organic produce, we’re interested in a variety of food topics. That’s because, like you, we grow as much of our food as we can. Or want to. We’re looking forward to discussing all of it with you.