Organic gardening practice that emphasizes soil quality in our backyard vegetable patch and landscape is one thing. Improving our nation’s farm soils, acre by acre, is another.

So it was with a smile that your cheerful Planet Natural blogger ran across this announcement of the 2015 Tri-Basin Natural Resources District Soil Conservation Award from south-central Nebraska.

The winner, Greg Linder of Loomis, Nebraska, is something of an American inspiration for both the generations of farming his family represents, as well as his efforts to protect two of his county’s greatest resources: its soil and water. It’s worth reading the whole story. The Linder family history, going back to homestead days and beyond, is truly one of dedication and rural independence.

In acknowledging the award in the Kearney (NE) Hub, Linder showed the kind of modesty that’s common among the handful of Nebraska farmers we’ve met over the years. “We have not been innovators in things as much as good followers in things…,” Linder said. “When we do something, we do so wholeheartedly. We live in a community here with a lot of innovative people. We have looked at what neighbors and friends are doing and glean the best.” 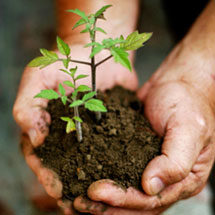 If you’re looking for the fastest ticket to a lush garden, start at ground level.

If you’re looking for the fastest ticket to a lush garden, start at ground level. Planet Natural offers a large selection of organic amendments, potting soils, inoculants and testing kits to help you produce healthy, productive plants year after year.

Linder and his community’s innovations may seem like modest steps — after all it’s a lot easier to convert a 10′ x 20′ garden patch to soil-savvy crop raising than it is a 350-acre field (of which farmers most likely have more than one) — but they’re important ones. They reflect the rise of the national soil conservation farming movement, one that’s seen the spread of energy and soil saving no-till methods, wise-water use, cover crop planting, and resultant reduction in pesticide and herbicide use (which means less watershed pollution).

Linder’s used no-till, no-drill planting techniques for years and has employed technology for more effective, less wasteful watering. No, it’s not perfect, organic-method farming, but the results, relative to what goes on at the big,corporate-driven farms, are all to the good.

That soil conservation is booming (any farmer will tell you that, with terracing and the like, they’re always practicing soil conservation) was on display recently in The New York Times, not a place you see the words “green manures” everyday. A feature on North Dakota farmer Gabe Brown, a leader of earth-wise soil conservation methods, made it clear that a lot of farmers are listening to his message. The reasons? According to the Times:

Brown has a busy schedule of speaking engagements which, as the story points out, are usually packed. What do the farmers hear? Look at the detail these two Iowa raisers drew from Brown’s address to the 2012 Grassfed Exchange Conference in Norfolk, Nebraska. Dig the part about turning cattle loose to forage cover crops, something that saves on baling, even as the cattle stomp out emerging weeds along with the cover crops.

We’re not the only country in the midst of a soil revolution. Check out this from our friends in far-from-the-bread-basket Nova Scotia (link no longer available). Farmers worldwide are employing these techniques to improve their incomes.

If you think this is a small movement, think again. Some 35% of American cropland is now farmed with no-till methods and the acreage will continue to grow. That’s good for the soil, good for fuel savings, and good for the environment. If the plain-sense growing advantages don’t convince farmers (and nobody pays more attention to soil than farmers) then the economics will. They are, after all, business men.

Your continually optimistic Planet Natural blogger thinks these are all good signs. If we truly will save the world by saving our soil, it will take farmers and yes, gardeners as well, to make soil conservation, a first step to organic growing, a success. Here’s hoping!