Heirloom "cooking beans" are nutritious, delicious, and easy to grow. 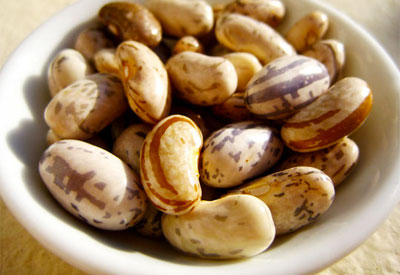 Our correspondent writes in to say the most beautiful things he saw at the last farmers market this fall were the large bowls of heirloom shell beans in colors and patterns he’d never seen before. He bought a couple of the four offered: two cups of the surprisingly popular Jacob’s Cattle, each bean big and colored like a Hereford, and a cup or so of brilliant, unusually black and white, yin-yang patterned “Calypso.”

Interest continues to grow in what our great grandmothers called “cooking beans,” dried shell beans that often require soaking and long cooking times, a process that many time-squeezed home cooks forego in favor of pre-cooked, canned beans. We’ve seen cookbooks that suggest canned beans are an okay substitute for dry beans you soak and cook yourself. But you’re not going to find heirloom beans, like the Dixie-Speckled Butterpea or the creamy Snow Cap, in a can on your supermarket shelves. 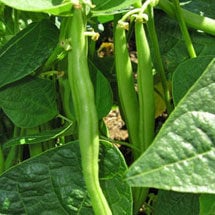 A garden and kitchen staple, unique beans — bush, pole or shell — are a summer treat!

A garden and kitchen staple, heirloom beans — bush, pole or shell — are one of summer’s fresh-flavored treats. Easy to grow. Try several varieties to find your favorite. Planting instructions are included with each seed packet and shipping is FREE!

Evidence of the bean boom (uh) can be found in seed catalogs, on discriminating restaurant menus, and in home gardens as well as at farmers markets and food co-ops. Some of the heirlooms now available are so attractive that, once shelled and cleaned, they can be set out in candy dishes as table decorations. Chefs are serving them cooked firm and buttered, or pureed in soups and sauces. Families are finding out just how fun it is to grow these rewarding plants.

Let’s get one thing out of the way right now about eating beans. We agree with food columnist Mark Bittman who says in his How To Cook Everything Vegetarian that gas just isn’t the problem it used to be. That doesn’t mean that the people sitting nearby are more accepting. It means that those of us who’ve eaten a lot of beans in our lives (great fiber) are just better able to digest them. They don’t cause us problems. So the answer to the problem with eating beans? Eat more beans.

Of course, the fun doesn’t stop at the growing. Cooking beans require drying, shelling, cleaning, and storing. One of my favorite kid memories is sitting around a table with a bunch of cousins shelling red runner beans. The conversation was quick, smart, and funny, at least to my young ears. I’d never before heard the word “flatulence” used in polite conversation

Most of our experience with shell beans come from fava beans. They were easy to grow in our cool Northwest climate — we often had to support them — and always produced a good crop. Though there’s a lot you can do with favas, most of our beans went right from the hard work of picking and shelling to the steamer (we always found it hard to strip the pods from the plant, let alone pull out the beans). Akin to lima and butter beans, favas aren’t the tastiest of bean. But they are meaty. Putting a bit of butter on them is always a good idea.

Garden note: however hard they are to pick and shell, favas, like many beans, will reward you with nitrogen fixing in your soil.

We’d tried growing lentils one year, too, but the gardening season was particularly wet and the low tangle of lentil bushes developed gray mold. That was that.

But the heirlooms that we’re seeing offered are a different thing from the same old bean. Those Jacob’s Cattle beans get all creamy inside when baked. They’ve become a favorite ingredient among discriminating chefs, both at home and at restaurants, who do Boston baked beans. The Calypso beans cooked up big and toothsome, swelling to almost twice their size while retaining their black and white contrast. They made an attractive topping to a pile of Jasmine rice.

It’s never too soon to start planning next year’s garden. If you want to grow these varieties, consider this. Many shell beans, hailing from South Africa and other warm locales, require long growing seasons. But not all. The Jackson Wonder is a snap and shelling bean that yields in 75 days. The Hidatsa Red, traditionally grown by the Hidatsa people of the upper Missouri River, will not only tie you to history but give you beans in 85 days, conditions permitting. Both of those beans will need a couple extra weeks more to dry on the vine. It’s important to match the bean you plan to raise to your growing zone. I’ve heard it said that if you can grow winter squash, you can grow shelling beans. That’s something most of us can do.

Beans, like those scarlet runners my cousins and I shelled, that can be eaten early as snap beans or left to dry on the vine and then shelled are always a good choice. Those scarlet runners were pretty when they blossomed and pretty when we shelled them but they’d lose most of their color in the cooking. On winter weekend nights, my aunt would just boil up a bunch and serve them with butter (more likely, margarine). As she served them, she’d demand no joking. But we couldn’t help ourselves.

You can even grow your own soy beans. 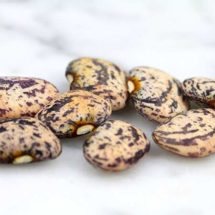 A hardy variety that comes from the Hidatsa people of the upper Missouri River. 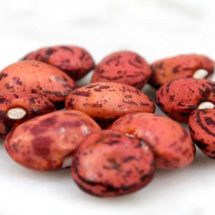 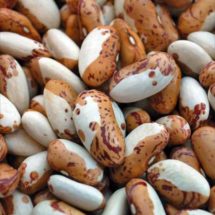 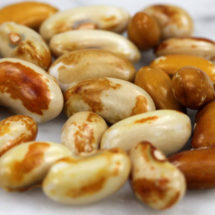 Introduced in 1897, this exceptional variety is sweet and meaty. Good for baking!