What’s Left In the Root Cellar

Using, not losing, what remains of last year's harvest. 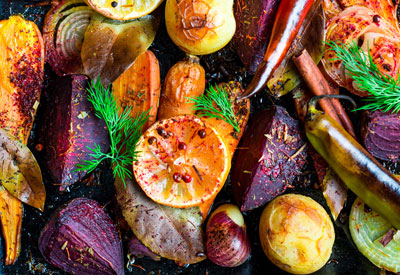 We were fortunate to have a root cellar when we had a small hippie homestead years ago in the Pacific Northwest. While we often think of root cellars as being underground, or part of a basement — a good thing as being below ground, surrounded by earth, moderates the cold outdoor temperatures — our “cellar” more resembled a tiny cabin. With its thick cedar log walls stacked tightly against each other and a dirt floor, we were able to keep some of the summer’s bounty — mostly root vegetables and squash, but also onions and a cabbage or two — well through the winter.

Winter squash were gently stacked neatly on a pallet. Carrots were buried without touching each other in layers under cedar sawdust in an old wooden barrel. Parsnips and rutabagas were likewise buried in sawdust in a couple old wash tubs. Cabbages were wrapped in newspaper and stacked off the ground in apple crates, not the cardboard kind of today but the good, old fashioned type with artistic labels from orchards in places like Wenatchee and Yakima. Apples, cushioned with wadded newspaper, also went into apple crates. Potatoes, which we tended to use up quickly, were kept in tin buckets. Onions hung from hooks screwed into the low ceiling. Despite its pitched roof, the builder had fixed a tight ceiling against the rafters which probably was insulated on the other side.

With the rise in home gardening and the sustainable, grow-your-own movement, root cellars are enjoying something of a comeback. They do more than keep your vegetables all year long. Remember that feeling you had — part pride, part satisfaction in reward for your hard work — when you pulled something out of your still growing garden and brought it to the house for serving? Root cellars preserve those wonderful feelings as well. 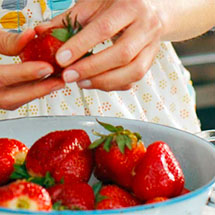 The effective, safe and delicious way to preserve what you grow.

Whether pickling, making jam or putting up fresh garden produce, we have the canning supplies you’ll need — jars, caps, lids, pickling spice — to keep the harvest through the winter and beyond.

This time of year, when Mother Nature sends out her mysterious signals that spring is just around the corner, things begin to change in the root cellar. You’ll notice that those carrots you’re digging out from their insulating sawdust near the bottom of the barrel are showing the yellow beginning as tops, tops that would turn green if exposed to light. Likewise the other root vegetables you’ve saved. Any squash that remain begin to take on something of a musky flavor. Onions, once crisp and hard, are starting to soften.

To avoid losing what you worked so hard to grow, you have to start utilizing the harvest now (see Recipes from the Root Cellar). Nothing, as it’s said about everything, lasts forever and vegetables that have been stored are particularly susceptible as the season changes. Of course, wise gardener that you are, you’ve been digging things out of the cellar all along. You’ve monitored what you’ve put up for bruises, spoilage, and other signs of decay. It’s true what they say about one bad apple and not just about apples. It might be that you’re getting a bit tired of eating from last year’s bumper crop of rutabaga. But that doesn’t mean you should waste rutabaga.

Paying close attention now will save work down the line. One March, we were called away on a family emergency only to come back a couple weeks later to find that the remaining apples had rotted, the carrots had turned as soft as bread dough, and the last remaining winter squash had escaped their rinds leaving a foul-smelling pile of slime that slipped right through the pallet and onto the floor. Cleaning up the mess was as unpleasant a task as we can recall…and we’ve had some unpleasant tasks.

So March is the month to turn those last remaining apples into sauce and your onions into soup. Sick of steamed rutabaga or fried parsnips? Purees are a wonderful way to serve up the last root vegetables. Shredding carrots or parsnips into stir fries, say, with the first bok choy you’ve gotten from your indoor garden or with the sprouts you have been growing on the window sill. Sometimes you’ll need to bring home something form the market to enliven one of your dishes . . . what would carrot-ginger soup be without the ginger (which keeps well but isn’t easy to grow in most parts of the country)? And, of course, there’s always carrot cake.

Those winter squash that have lost some of their sweetness can be delectable again with a little cinnamon, ginger, and sugar (or honey). The secret to utilizing all of what’s left in your root cellar is a little imagination. How about a kraut made from fermented turnips and rutabaga? (Full disclosure: we haven’t tried this yet. Please let us know how it turns out.)

There are any number of good garden-to-table cookbooks that will suggest ways to use what’s coming from your root cellar this late winter. And it’s not too late to put-up the fruits and vegetables you’ve saved as jams, jellies and pickled treats. The important thing is not to waste what you’ve grown. You worked too hard to throw it in the compost heap. Now, while you’re itching to get into the garden well before you actually can, is the time to take stock of the root cellar. Let us know what you come up with!