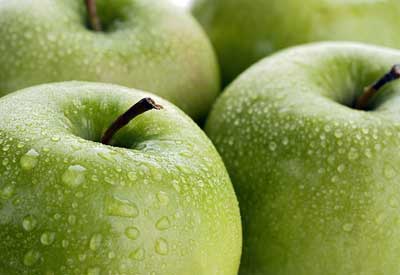 While most of the GMO attention these days is focused on the upcoming vote on California’s “Right To Know” initiative, another GMO controversy has boiled to the surface, this time with apples. Okanagan Specialty Fruits corporation has developed a genetically modified apple — known as the “Arctic Apple” — that does not brown, or at least doesn’t brown as quickly, when exposed to the air. The fruits are also not as susceptible to bruising, a problem that results in apples being refused by buyers at both the distribution and consumer levels. The controversy has spread across British Columbia’s apple growing regions and now, with articles in The New York Times and other publications, is gaining more focus in America.

The Arctic apple, so far developed as Granny Smiths and Golden Delicious (Galas and Fujis are on the way), contains a synthetic gene that sharply reduces production of polyphenol oxidase, an enzyme responsible for the browning. The introduced gene is taken from the apple itself and then inhibits the production of genes that result in the browning agents.

The arguments for and against the genetically-modified apples are familiar to those following the GMO issue. They include both sides of economic arguments (growers of traditional apples say Arctic apples will drive down the price of their product), health issues (the apple will be among the the first GMO products, like GMO papayas, consumed without processing; consumers will bite directly into it; its producers say the apple has no nutritional differences) and dangers to established growers if the genetic apples cross-breed with traditional apples. (Click on the links above for more detailed discussions of these issues.) Do we really need to go to such gene-tampering lengths? The answer is obvious to any parent who’s packed a school lunch containing apple slices splashed with a little lemon juice. Some local entities — and some large, including the British Columbia Fruit Growers Association — have come out against the GMO apple.

The one argument against the apples that seems unquestionable involves the dangers it provides to organic growers. If DNA from the genetically-modified apple cross breeds with their non-GMO crops, private growers will lose the genetic purity they seek and commercial growers would lose their organic certification. Advocates of the Arctic apple say this is unlikely because sticky apple pollen usually isn’t carried far by the wind. This answer of course, disregards other pollination means. Have the champions of the Arctic apple never heard of bees?

The United States Department of Agriculture has just opened the comments period regarding the genetically-modified apples to the public. You can find the rules regarding comments, and the Okanagan Specialty Fruits company’s application for approval, through this web-posted document (PDF). Comments will be accepted through September 10.