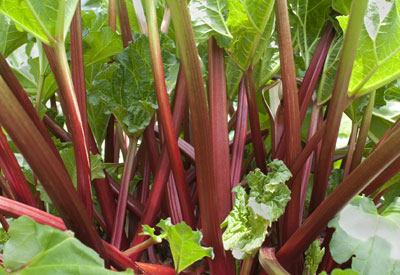 Our correspondent in Northwest Washington’s Skagit Valley, home to family farms, organic growers, nurseries and a surprisingly rich country dining scene, reports that farm markets and country produce stands were open over the weekend with two products: asparagus and rhubarb.

Of all the early season crops, these two are often the most anticipated and the first to harvest.

Rhubarb holds a special place in our hearts. That’s mostly because of pies, tarts and cobblers that featured the tart stalks, well-sugared, that grandma served, often in combination with strawberries or other early season berries, and, of course, ice cream. Grandma’s gone but her recipes live on.

The great thing about rhubarb is its adaptability. It fits into almost any pie or cobbler recipe, mixes well with red berries, and can be sweetened just the way you like it, which might mean a lot less sugar than grandma used to add. We find we’ve developed a taste over the years for tart rhubarb. But kids? They like it sweet. 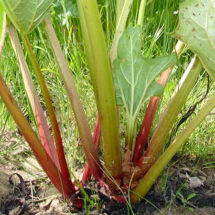 Very popular in northern climates for a hit of sweetness after long winters.

Planet Natural offers heirloom garden seeds that are non-treated, non-GMO and NOT purchased from Monsanto-owned Seminis. Planting instructions are included with each packet and shipping is FREE! Need growing advice? Visit our vegetable guides for tips and information on specific types.

Here’s my tactic. Make it with less sugar or maybe honey (bake slowly at low temperature) and dare your kids to eat it. If they don’t, more for you. But they’ll eventually give in when they see you eating it, especially with the ice cream. No rhubarb, no ice cream. (Okay, maybe a little ice cream.)

Planting rhubarb crowns now will yield returns for years to comes. How many old or abandoned farm houses have we seen where somewhere in the overgrown lawn the broad rhubarb leaves clustered on droopy stems showed where a well-tended patch had once been located.

We find the spread of rhubarb leaves in the early spring, often over the bare and waiting garden soil around it, is one of gardening’s big thrills, even more thrilling when you imagine what will be made of it. Rhubarb crisp!

Rhubarb needs a period of temperatures below 40 degrees — a condition otherwise known as “winter” — and starts to grow when the temperatures exceed 40.  Mulch it well come fall and it will handily survive cold, zone 3 conditions. It even does well in Alaska (PDF).

Rhubarb loves full sun but we’ve had a couple-three plants do well on the side of the garage that got only afternoon sun.

You don’t have to plant much. Three plants will give a small family all they need. Four plants and you’ll be giving it away. And that’s not a bad thing.
Often a neighbor with good-looking rhubarb is your best source for starters.  Ask her or him (or both) if you can have some of the crown when he’s dividing the roots. You’ll need a root with at least one bud to get started.

Here’s what you need to know to grow rhubarb.

Rich, deep soil is a must. As for berries, it’s pH should be on the acidic side, 6.5 all the way down to 5.5. Well-composted manure is a great addition, so is a high-nitrogen, organic fertilizer. Water well when putting the crowns in the ground and keep watered as the season progresses. A second application of fertilizer once growth is well under way gives you strong broad stalk growth.

Give them space. Three-feet between plants is not too much.

Don’t harvest the first year. Let ’em grow. But the next year, when the top growth is green and full and the stalks are thick and showing color, harvest with a sharp knife, leaving a few stems with leaves to grow on.

Take them in the house, wash well especially if you used a foliar spray for later fertilizing, then chop up the stems, discard the leaves (they contain oxalic acid), stick them in a pot with enough orange or apricot juice to cover, add a tablespoon of sugar, or maybe two, and a bit of grated ginger. Let it cook down. Stewed rhubarb. Just like that.

We also like roasting stems in the oven, much like you’d roast a beet or a turnip. Place the stems in a glass baking dish, add a quarter inch or less of water, sprinkle in some raw sugar, cover, and bake at 350 until soft and giving but not mushy. This is the stuff to layer into a pie crust or even add to spring salads. We’ve been known to eat it right out of the dish.

We don’t have to guide you to pie and cobbler recipes, do we? Now where’s that ice cream?

One Response to “Grow, Enjoy Rhubarb”