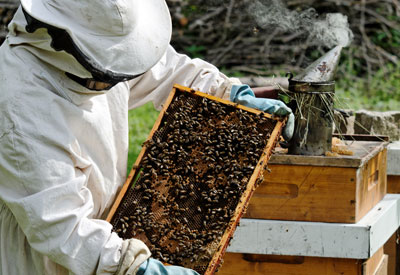 A new study has found that over 70% of pollen and honey collected from bees at various times in Massachusetts contained one type or another of neonicotinoids, a class of insecticides that’s been implicated in the honey bee die-offs of the last several years. The study was conducted at Harvard University’s Harvard T.H. Chan School of Public Health.

“Levels of neonicotinoids that we found in this study fall into ranges that could lead to detrimental health effects in bees, including CCD,” Chensheng (Alex) Lu, associate professor of environmental exposure biology in the Department of Environmental Health at the Chan School and lead author of the study said in a press release.

Here are the details:

And here’s the takeaway:

Not only do these pesticides pose a significant risk for the survival of honey bees, but they also may pose health risks for people inhaling neonicotinoid-contaminated pollen, Lu said. “The data presented in this study should serve as a basis for public policy that aims to reduce neonicotinoid exposure,” he said.

The European Food Safety Agency reported in 2013 that neonicotinoids, and specifically the form most discovered in the Massachusetts study, imidacloprid, “may affect the developing human nervous system.”

The thought of pregnant women breathing in neonicotinoids carried by air-borne pollen gives us pause.

The New York Times has reported that that sales of neonicotinoids are worth billions of dollars. The companies that make them have protested bans and sought to blame colony collapse on other contributing causes.

There are claims that since Europe began to restrict the use of neonicotinoids in 2013 insect damage to crops is on the rise without a downturn in hive loss. But the groups making those claims tend to be lobbying organizations supported by big agriculture.

The importance of honeybees to our food supply is well known. And we don’t know anyone who want to endanger children in the womb due to chemical exposure.

Yes, we need more testing. But let’s play it safe. We should ban neonicotinoids unless they can be proven to do no harm, to bees or babies. For once, let’s put our well-being over corporate profit. We’re looking at you elected representatives.

One Response to “New Study Finds Pesticide In Pollen, Honey”