There are many reasons to eat organically. Better taste is one. 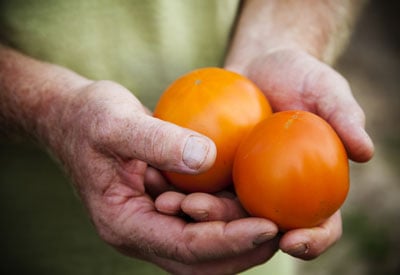 Your friendly Planet Natural blogger, always hungry to learn about cooking, saw the Dan Barber installment of the new Netflix documentary series Chef’s Table. The series profiles a different, high-profile restaurant chef each of its six episodes. Barber, a long-time champion of the farm-to-table, sustainable-agriculture movement, is the co-owner and executive chef at New York City’s Blue Hill, an upscale restaurant with a sister location in the country, Blue Hill at Stone Barns, 30 miles north.

The interviews in the documentary make it clear that Barber is solidly behind organic growing and for all the expected reasons. But he doesn’t dwell on the dangers presented by conventionally grown crops or the amount of chemicals and pesticides poured into the environment, although that gets mentioned too. Instead he talks about the importance of soil to flavor.

OMRI Listed for use in organic gardening! Alaska® Fish Fertilizer has been around for years and is one of the best all-purpose nutrients for plants. Rich in organic matter, it breaks down slowly to feed plants — and soil microbes — over time. Great for lawns too!

But he know about growing, too. Barber notes that the responsibility of organic farming is returning fertility to soil without using chemicals. He encourages creating a lively community of soil microbes:

“… that will ultimately translate into your tasting something [more] delicious than a plant grown in denuded soil, than chemicals … the more life there is in the soil, the more potential you have for creation of flavor.”

In a world where the conventional vs. organically grown fruit-and-vegetable controversy is narrowly focused on whether or not organic produce is really more healthy for you, it’s refreshing to see some of the myriad other reasons for organic growing get some attention.

Home gardeners know best how superior, say, a homegrown tomato is to one purchased at the grocery or served at most restaurants. Freshness, of course, is one factor. No grocery store tomato, no matter how carefully grown, is going to taste as good after a couple days shipping and sitting on display, as the one you pull from a vine on a warm summer’s day and slice immediately.

You’re invested in your home-grown tomato. Your tomato grew where you placed it, where you made sure the soil pH was just right and that plenty of organic material was worked in. You made sure the NPK ratio was balanced just the way tomatoes like it and you timed your organic fertilizer boosts just when it would be best utilized.

When the fruits started to swell and color, you made sure the plants were staked well enough to support their heavy load.

And it’s not that organic produce simply tastes better. It tastes unique. It reflects the soil in which it was grown, lending a characteristic, defined by a term first attached to wines but now attached to everything from sweet corn to goat cheese: terroir.

Terroir — makes you think of “territory,” doesn’t it? — is the effect geology, climate, and most importantly, soil factors play in the flavor of what’s grown there. The effect moves up the food chain. The local grass and grain fed the goats and cattle make for subtle, delicious regional differences in their meat and milk and cheeses.

How is this reflected? In the richness and color of the meat’s fat and the milk’s cream, in the subtle, grassy finish that fresh farm milk has. In fruits, it’s reflected in the characteristics of their sweetness. In vegetables, terroir comes through in texture and character of flavor. Eggplant, picked from your garden at its peak, is seldom bitter like the kind from the supermarket.

That’s the terroir we’re all most familiar with: our home gardens. We taste it in the sweetness of the winter squash we grow, the crispness of the heirloom lettuce, the difference in taste between bush and pole beans. As Barber suggests, this general, even mystical concept of terroir, is being understood in terms of soil and the amount of life it harbors.

Scientists, too, are discovering that it’s all about the microbes. Soil is alive.

That, in addition to taste, is another reason we embrace organic growing: to protect and conserve our agricultural soil. A United Nations study recently found that a third of the world’s soils were degraded from chemical pesticides and fertilizers. Erosion from high oil use farming practices is predicted to take half the world’s top soil in the next 60 years.

The steps needed to save our soils are the same steps that give us better vegetables. That sounds like a win-win.

Barber himself is invested in the agricultural movement through his Stone Barns Center For Food & Agriculture, a non-profit, working farm and education center devoted to sustainable growing. You’re invested, too, when you grow your own vegetables in the backyard. Few of us can spare the expense of a trip to Manhattan and a meal at Barber’s Blue Hill. But we know the flavor of a good tomato, one we grew ourselves. And that’s priceless.