How to maximize crop yields from small space vegetable gardens. 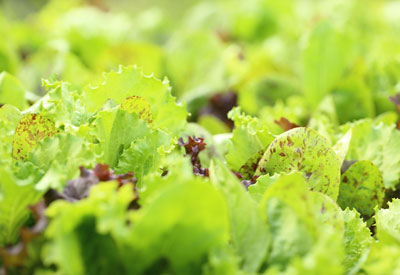 At different times in our gardening life, small plots have forced us to take growing space seriously. It was in a small backyard corner space that we first tried square-foot gardening. We started succession plantings — raising one crop then, after its harvest, immediately replacing it with another — in a couple raised beds in a California front yard.

While square-foot vegetable gardening has been one of our staples no matter where we lived, succession planting becomes a more complicated proposition the further north you go. We have cousins down south that brag they’re growing different crops in succession all year long. In the midwest, we once got three crops in, if memory serves, greens and radishes, followed by bush beans, followed by turnips that came out of the ground sometime after the first hard freeze.

In high-altitude, short season (usually) Montana, succession planting means two vegetable crops, one of them possibly started the previous fall. We’d like to take down our peas after harvest and plant tomatoes where they grew. But peas here take their time while tomatoes never have time enough. I’ve grown early greens then replaced them as summer heated up with golden beets which also supplied greens as long as I kept them watered and shaded during the hot part of the day. After the first hard fall freeze, we dug the roots. 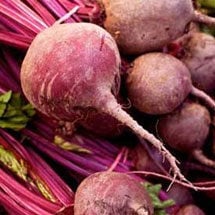 Planet Natural offers heirloom vegetable seeds that are non-treated, non-GMO and NOT purchased from Monsanto-owned Seminis. Need growing advice? Visit our vegetable guides for tips and information on specific types.

Beyond getting multiple crops from a single bit of garden, succession planting also includes staggering plantings to include a continuous harvest. This is sometimes called relay planting.

Weather variations sometimes mean that staggered or relay planting sometimes come to harvest all at once, no matter when they were planted. But with luck, you’ll plant a row each of leaf lettuce and spinach every seven days and you’ll have greens until summer heat sends them to seed. Planting bush beans and sweet corn every 10 to 12 days means you’ll be eating two of summer’s best treats all through the dog days.

Succession planting in the home vegetable garden means planning. Make a list of the crops you want to grow and then begin to break them out as early-season, quick-growers, long yielding plants like beans and tomatoes (if you have enough heat), and slow-maturing plants such as winter squash and sweet corn. Here’s a handy guide (PDF, scroll down to page 3) that gives a good visual sense of which crops to plant when and how much time they need from the University of Delaware Cooperative Extension.

Figure out what’s possible inside your last and first frost and then plan accordingly. Start and finish with crops that can take a light frost.

And don’t be afraid to push the envelope. Take a chance the weather will be good and that the root vegetables and greens you plant well into August will still be coming to your table in October. Anticipating the weather sometimes means planting less. A warm, long summer in the Pacific Northwest last year meant that most growers had more tomatoes than they could handle.

We’ve had success planting crops in the same spot simultaneously. Bush bean seeds planted around newly set-out tomato starts has been a good one for us, the beans taking off as the tomatoes soar, the beans harvested and pulled just as the tomatoes are really putting out. We’ve let cucumbers and summer squash trail into a spinach patch and pole beans crawl up corn stalks.

Crowding and replacing crops requires special attention. Watering is extremely important. Overwatering when plants are crowded can be as bad as watering too little.

Leafy vegetables planted later in the season will probably need shade to keep from bolting. Too much July-August sun can be a bad thing for new plants (see Companion Planting).

Dress your plants with compost to keep them healthy and use a good general purpose fertilizer. In small garden plots, we’ve always preferred fish fertilizer, mixing it right in the watering can for easy application (watering cans are my small garden plot favorite … the kids love ’em, too). If you’re taking out bolted salad greens and putting in heavy-feeders like squash or tomatoes, add plenty of compost to replenish the grow space. Those heavy-feeders might enjoy some well-composted manure as well.

We all want to get the most from our gardens. Here’s additional info on intensive gardening methods from the Virginia Cooperative Extension, where summers can be hot. And here’s an informative piece from Oregon State University where the opportunities for several garden crops seem ideal. 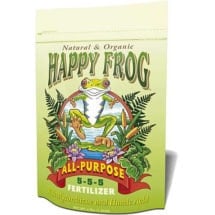 Granulated and easy to use, Happy Frog All-Purpose is one of the best! 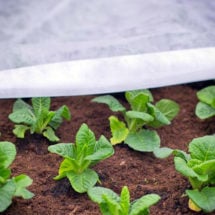 Start planting earlier in the season for a longer flowering and growing period.

One Response to “Stagger Plantings to Keep the Harvest Going”