Growing Pumpkins For Fun and Pie

Pumpkins are easy to grow organically. 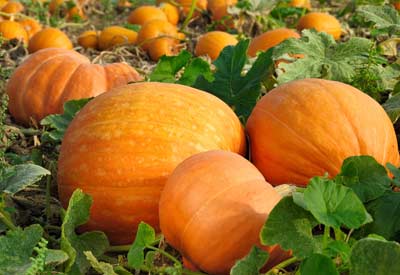 My grandfather used to say that a jack-o-lantern was a waste of a good pumpkin. He grew a pumpkin patch at the end of his garden that would spread out over the rough lawn that bordered it. The next year he’d move it to the other side. He’d get a handful of fruits each year and he didn’t want any of them to go to Halloween carving (see “grandma” below).

Grandpa loved pie and he especially loved pumpkin pie which he ate absent whipping cream or any other adulteration. Grandma was celebrated for her pie crusts, though we often wonder what her great grandchildren would think of the cube of lard that was always in the back of the refrigerator. No matter what time of day grandpa took a piece of pie — including as a bedtime snack — he washed it down with a cup of coffee. He seemed immune to caffeine.

We know what grandpa would think of those giant pumpkin growing contests. How many pies can you make from such a monster? And we know what he would think when seeing a pile of those cute little pumpkins that people use for autumn centerpieces and displays: it would be a lot of work to make a pie from those little buggers.

Planet Natural offers heirloom pumpkin seeds that are non-treated, non-GMO and NOT purchased from Monsanto-owned Seminis. Need advice? Visit our vegetable growing guides for tips and information on specific types.

But grandpa, long rest his difficult soul, would have been heartened by the rise of interest in heirloom pumpkins that are specifically cherished for their meat, pumpkins like the Long Island Cheese, which has an almost 200 year history and a reputation for its pie potential. Too bad grandpa never knew about it. There are so many kinds of pumpkins and squash to grow these days that it’s hard to tell them apart. Not that you need to.

Organic pumpkins, like all pumpkins, need a lot of room. And that proves impractical for many gardeners. I’ve tried planting pumpkins at the edge of the garden and trained the vines out into the lawn. This got me into some trouble with the home office when the grass under the vines couldn’t be mowed and the pumpkins themselves killed the grass where they sat. My solution to this, which also got me into some trouble, was to dig up the area where the pumpkins had trailed and add to the garden space.

Some seed companies advertise “bush” pumpkins that save on space. Our experience suggests that these pumpkins aren’t necessarily grown on compact bushes, like string beans, but do have shorter vines. Smaller plants means smaller pumpkins.

A good choice for those with limited space, though not an heirloom, is the Bushkin which will grow seven-plus pounds from vines that don’t run more than a couple feet or so. We’ve read accounts of them being grown in containers (full disclosure: we’ve never tried growing pumpkins in containers). It’s seed can be hard to find. You might find some through one of the seed exchanges that are out there. If you’re lucky, someone in your local garden club still grows them.

The best thing to do is to find a place for a big enough patch, if not in your own yard, maybe in a community garden or in a particularly neighborly neighbors yard. Make sure it has good air circulation and isn’t sheltered by bushes or other landscape features. Pumpkins are particularly susceptible to downy mildew in the late season and its important to keep the air moving around them, especially in humid climates.

Now’s the time to dig in lots of manure if you can get it. Pumpkins are heavy feeders and a good supply of nitrogen, along with the goodness of organic compost, helps assure success. Spreading manure now and covering it with mulch will give it time to mellow ahead of spring planting. Pumpkins also like potassium and a foliar application ahead of blooming will encourage healthy growth and fruiting.

Pumpkins do well with long cool days. That’s why those giant pumpkins you see on the news often come from places like New England and Michigan. But getting pumpkin seeds planted directly in the garden in these areas can be a slow and iffy process, especially if the weather’s particularly damp. You can start pumpkin seed indoors a month or so before the last expected frost. Be sure to give them strong, close light after they germinate. Set plants out carefully, not too early and not too late on a warm, sunny day. Try not to disturb the root ball and don’t allow your new transplant to dry out. Side dress with compost a couple weeks after setting out and then regularly during the growing season.

And don’t listen to my grandfather. Standing around the table where field pumpkins are being sculpted by young hands, sometimes with an adult’s guiding hand (this is where I learned to use a knife safely) is a cherished family activity. Grandma saw to it that at least one of grandpa’s pumpkins went to that very use every fall, whether he liked it or not. 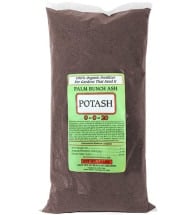 Palm Bunch Ash has long been known to be an excellent source of potash (K). 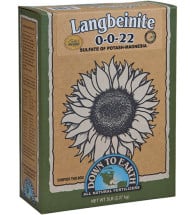