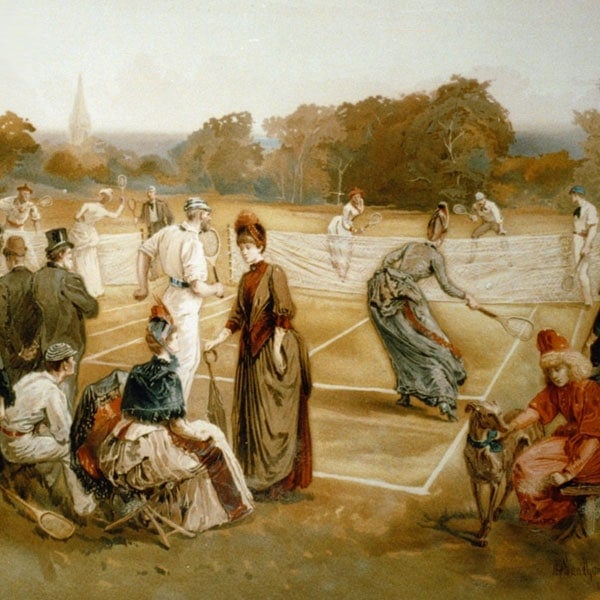 The lawn appears to be a European invention, which makes ecological sense because the moist, mild, climate of Europe supported open, close-cut grasslands. (The less temperate climate of North America does not.)

The Middle English word launde originally referred to a glade or opening in the woods, but later designated artificial stretches of land that resembled such glades. Some of the earliest lawns were the grasslands around medieval castles in France and Britain, kept clear of trees so guards had an unobstructed view of approaching, perhaps hostile, visitors. The term also referred to the village “commons”, the meadows shared or held “in common” where villagers could graze their sheep and cattle. These hooved lawn mowers kept the grass cropped, fertilizing as they grazed. Talk about organic lawns.

In the 16th Century Renaissance, lawns were deliberately cultivated by the wealthy in both France and England, though they were more likely planted with chamomile or thyme than with grass. Both of these ground covers make excellent alternatives to grass in modern lawns.

Closely shorn grass lawns first emerged in 17th century England at the homes of large, wealthy landowners. While sheep were still grazed on many such park-lands, landowners increasingly depended on human labor to tend the grass closest to their homes. Before lawnmowers, only the rich could afford to hire the many hands needed to scythe and weed the grass, so a lawn was a mark of wealth and status.

The New World: Golf and Other Games

Immigrants from Northern Europe brought with them to North America both the idea of the lawn and the grass seeds to create it. Some of those seeds, like the seeds of many other European native plants, were carried here with great care; others arrived on coat hems, or rolled in bundles of bedding or crates of imported goods, or on the rope used to tie such crates and bundles.

Here, as in Europe, at first only the wealthy had the time or money to cultivate a well-manicured lawn that was purely decorative. In those early days the lawn was still a rural phenomenon, and one confined to the upper classes.

Several wildly diverse forces combined to make lawns popular, then common, in North America. Some of these seem obvious: industrialization, in the form of the lawn mower, is one, while the growth of suburbs is another. But if you wanted to blame someone for lawns, it appears you could blame the Scots.

Where England is (or was) a land of forests (remember Sherwood, where Robin Hood & Co. hung out?), Scotland is primarily a country of open grassland, having been denuded of its somewhat stunted trees centuries back. It makes sense, then, that golf and lawn bowling, both of them dependent on lush, shorn grasslands, were both developed in their modern forms in Scotland.

Lawn bowling, or bowls, once popular in both England and Scotland, received a major set-back in England when various kings from the fourteenth through the sixteenth centuries prohibited commoners from playing it. (There’s a moral here, something about the close link between the exclusive and the extinct.) Both bowls and golf therefore came to North America with Scottish immigrants, and along with those sports, of course, came a yen for the lawns on which they were played.

In Canada, it was bowling that played an early pro-lawn role. The game also got off to a promising start in what became the U.S. (bowling greens were cultivated in Virginia and in Boston before 1650), but after the Revolutionary War the new young country tossed the baby with the bathwater, spurning bowls as it did all things British. Across the U.S., towns named Bowling Green commemorate bowls, but perhaps only a few residents understand the history of their town’s name. In Canada, which negotiated a peaceful independence from Britain in 1867, bowls remained popular — and of course it required large, flat stretches of closely mown grass. An influx of Scottish immigrants in the late 19th century gave the game a boost in Canada and revived it to some extent in the U.S.

Another Scottish import, golf, played a similar role south of the 49th parallel, providing a practical reason for growing turf, a “crop” that produces no edible fruit or vegetable. The first courses in North America were established in Montreal in 1873 and Quebec in 1875, while the first American golf course was built in 1888 in New York. The game took off in the United States, becoming so popular so quickly that the U.S. entered seventy players on a number of different teams in the 1904 Olympics.

Those Games provide one of the best underdog stories ever, for while the U.S. did win the team gold, even their young and powerful stars, cousins Chandler and Walter Egan, could not capture the individual gold. That went to Canada’s forty-six year-old George S. Lyon, who took his victory lap, down the length of the clubhouse, on his hands. He had only been playing golf for eight years.

Between 1910 and 1924, the U.S. Golf Association (USGA) helped fund and carry out research in conjunction with the U.S. Department of Agriculture about the best ways to cultivate grass. Reportedly the first experimental turf farm in the U.S. resided where the Pentagon sits today.

Of Parks and Suburbs

In the mid 19th century, as cities grew and became increasingly industrialized, city beautification campaigns became common, and the “park” was born. This term had originally referred to the acres of lawn with their carefully tended trees around wealthy English homes. Now it took on a new meaning in democratic America and became a public area characterized by landscaped lawns, trees, shrubbery, and water (fountains, streams, ponds, and lakes) — all features lifted from British estate grounds.

Redefined and democratized, the park became ubiquitous in North America. Anyone who has driven across the United States or southern Canada knows that even the smallest town has its park: a block or two devoted to grass, trees, a sandbox and swing set, a few benches, a picnic table, and a water fountain. If all of those items were removed save the first, grass, it would still be recognizable as a park.

Eventually lawns migrated from the civic center into North America’s backyards. A key figure in this movement was Frederick Law Olmsted (1822-1903), a.k.a. the American father of landscape architecture, who planned New York City’s Central Park in the 1850s, as well as parks in Boston, Montreal, and elsewhere. Olmstead not only popularized the use of meadows in public parks, but also designed suburbs in which each residential home sported a lawn. 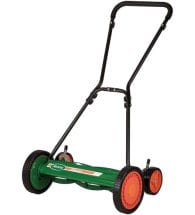 Produces NO toxic fumes for the environment to absorb -- just a couple of footprints!

Like honesty and hard work, the Scotts® Reel Mower is an American classic. Produces NO toxic fumes for the environment to absorb… just a couple of footprints in a beautifully cut lawn. Cutting height 1- to 3-in. with quick-snap height adjusters.

Lawns also became more popular as homeowners sought an antidote to rapid industrialization. Having fled the factories, however, new homeowners turned to them for help in taming their miniature Edens, buying mechanical lawn-mowers in increasing numbers. Edwin Budding developed the first lawnmower in 1830, and by the 1890s they were a fixture of the landscape. The development and mass-production of lawn mowers made possible the development and mass-production of lawns, providing an affordable alternative to a fleet of servants, and a practical alternative to a herd of sheep or goats (see The History Of The American Lawnmower).

Stamping Out Communism and Crabgrass

In the middle of the 20th century, three overlapping developments helped promote the lawn across North America. The first was Levittown, one of the first cookie-cutter affordable-dwelling suburbs, built between 1948 and 1952 by Abraham Levitt and his sons William and Alfred on Long Island. This was the first American suburb to include lawns already in place when the first tenants took possession (see Levittown: Documents of an Ideal American Suburb – PDF).

The Levitts, who also build subdivisions in New Jersey, Pennsylvania, Cape Cod, and Puerto Rico (several of them also called Levittown), pioneered the established lawn, which residents were required to keep up but forbidden to fence in. The importance of a neat, weed-free, closely-shorn lawn was promoted intensely in the newsletters that went out to all homeowners in these subdivisions, along with lawn-care advice on how to reach this ideal. 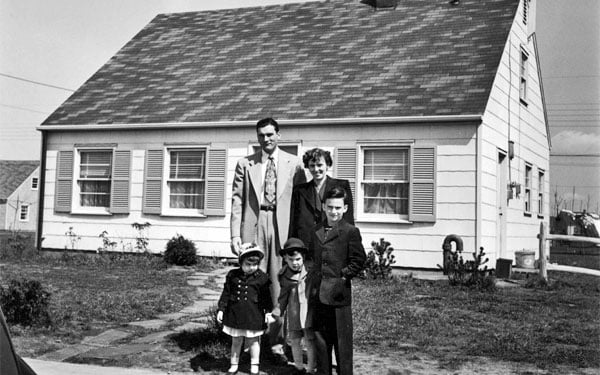 To understand how three or four specific communities could have national impact, it helps to know something about their scale. Levittown, New York, originally planned at two thousand homes, eventually had six thousand. When the four model homes went on display at the second planned community, in New Jersey, thirty thousand people went through them the first weekend.

These numbers point to the second factor giving lawns a boost in the ’50s: the need for inexpensive housing to accommodate returning GIs and their young families. These were soldiers, trained in neatness and obedience, and these were the conformist fifties, when everyone was on the watch for signs of Communism and crabgrass. At times, the two seemed morally equivalent. For a wonderfully readable account of this confusion and of how Levittown and the fifties promoted the lawn in America, see American Green, by Ted Steinberg.

A new weapon in the war against weeds! Made from cinnamon bark, AgraLawn® Organic Crabgrass Killer is an all-natural herbicide used as a spot-treatment to control crabgrass, basket grass, chickweed, clover and other similar weeds.

Almost in lock-step with those two sociological events, science and technology produced a whole train of inventions: the rotary lawn mower, effective (if not safe) pesticides, the first weed-free grass seeds, combined fertilizers and pesticides (early Weed and Feed products), and spreaders to make their application so easy it was child’s play. Out of these developments came the possibility of the weed-free lawn. Clover, which takes nitrogen from the air and deposits it in the earth where your grass can use it, was an accepted, even encouraged part of lawns until the early fifties. It only acquired its weed status because the earliest broad-leaf 2,4-D herbicides killed it off along with the dandelions.

These three post-war developments do much to explain where the standards for lawns come from. Since then the lawn has become a fixture of both American and Canadian suburbs and of the American imagination. The pursuit of perfection was on. While the lawn started as a sign of upper-class British wealth, it became a symbol of the middle-class American dream: a home of one’s own, surrounded by green, green grass. The task for the future is how to hold onto what’s valuable in this dream, while letting go of what’s harmful. 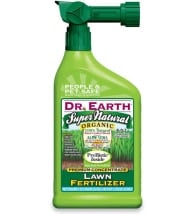 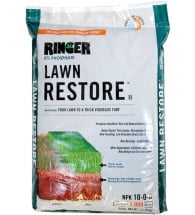 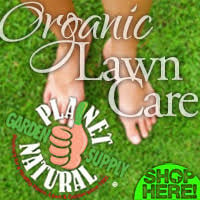