Keeping Mice From Your Compost Heap

Mice in your compost bin can be a problem year-round, but especially in the winter. 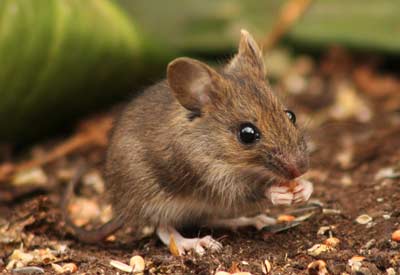 We love mice, as long as they’re in a children’s book. Out in the real world? Not so much.

Mice are associated with everything from Lyme disease to hantavirus. Many of the diseases they transmit are harbored in their feces and it’s hard to top the disgusting feeling you get finding tiny, black mouse cylinders all over a kitchen counter. Don’t think the disease potential is bad or only doesn’t happens outside the dusty southwest? Read this poor fellow’s story.

You probably do a good job keeping mice from inside your home. But keeping mice out of your compost is a different proposition.

Compost piles can be home to all kinds of creatures, some good, some bad. They are especially attractive to mice — and rats — in the winter. In the summer, when compost is being turned frequently and kept moist for ideal composting conditions, mice and rats will choose to live elsewhere, visiting your heaps only for kitchen scraps or other food that might glean.

In winter, a compost heap has everything a mouse needs. It provide superior insulation against the cold and may even provide some-self-generated heat. Compost piles tend to be drier in the winter when they’re not being turned and watered, which makes them even more attractive to the little critters. Best for the mice, a compost heap can be a source of fresh food, especially if you’re still throwing your kitchen scraps into it all through the winter. 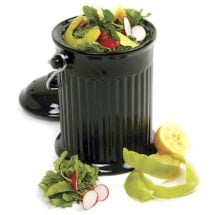 Purchase a kitchen compost pail from Planet Natural and there’s no need to run out to the pile after each meal – just lift the lid and toss-in left over table scraps. They’re fitted with activated carbon filters to eliminate odors and look great too!

Sealing up a compost pile to keep mice out is a frustrating endeavor. They can crawl through a gap no bigger than a penny and, persistent little buggers that they are, will chew their way or tear aside window screen you might tack around the bottom of the box. Just when you think you’ve done a good job sealing in your pile with screen and keeping them from burrowing in through the bottom, they learn to simply crawl up the side of the frame and drop in from the top.

The best solution of course, is to contain the pile in a barrel that’s elevated from the ground. I’ve never had a problem with mice in my compost tumbler. But I have in the three heaps that stand nearby. Some commercial compost containers are better at keeping out rodents than others.

Most sources suggest that the best you can do keeping mice from a big, open compost heap is to make the heap less attractive to them. If that doesn’t work, it’s time to set traps. But before you do that, here are some suggestions:

If you do need to set traps, use precaution. We won’t enter the live trap — kill trap debate other than to say sometimes you just have to do what you have to do (especially when mice are in your home). No matter which kind of trap you use protect yourself from the possibility of touching the mouse or fecal matter. Wear gloves and long sleeves. A breathing mask is a good idea to avoid breathing fecal dust that might be in the air, especially important when sweeping out a garage suspected of having mice. Dispose of the mice properly, in a sealed plastic bag — double bagged and knotted plastic grocery type bags will do if you have them.

We have a buddy who is one of those casual composters who lets his piles grow big and sit for years before he screens them and spreads the compost in his gardens. He claims that the best remedy for mice is to coexist. Mice need a place to live, too, he says, and after all they don’t really do any harm and may even help the compost. That’s when we tell him about the northward spread of hantavirus and the general spread of Lyme disease. We think he’s starting to listen. 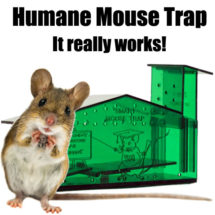 Unique design allows you to safely release mice outside, live and unharmed! 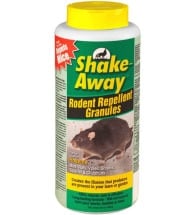 This easy to apply, non-toxic formula is SAFE to use inside your home or out. 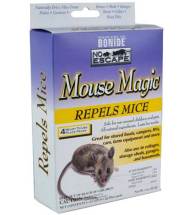