These easy-to-grow tubers, also known as sunchokes, are a healthy addition at meal time. 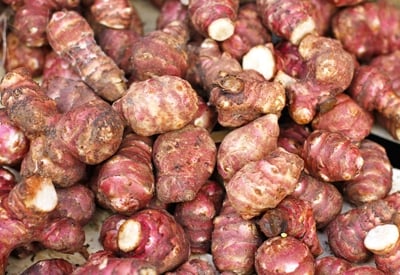 Your friendly and inquisitive Planet Natural Blogger once inherited a garden that had an established bed of Jerusalem artichokes. At the time we took it over, the artichokes were already growing and some, despite a rainy summer there in the great Northwest, were already sporting flowers. “We don’t do anything to ’em,” the crusty old gardener from whom we bought the property told us. “They just come back every year.” “Whatta ya use them for?” we wanted to know. “Oh, all kinds of things,” he said, which we later found out included throwing a bunch of them to the couple of hogs he was raising.

What we discovered in the years after was that Jerusalem artichokes — we never took to the commercial name “sunchoke” though we can understand its marketing value — were indeed easy to grow and produced bountiful harvests, even there in the cool and moist Pacific Northwest. And because we always harvested so many, we tried them all kinds of ways: steamed and mashed with butter and nutmeg, in a creamy soup, raw in dressed salads and slaws, sliced and stir-fried Asian style like water chestnuts. They were great as long as, like most things, you didn’t eat them every day. 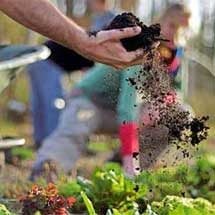 Planet Natural offers the organic amendments that your plants need to thrive.

Get your gardens off to a great start and keep them productive with premium quality soil amendments. Need advice? Our Soils Blog provides the ideas, information and practical experience you need to get the job done right.

Jerusalem artichokes make a great addition to your kitchen garden as long as you don’t let them get out of hand. Any tubers left in the ground after harvest — and we found that it was impossible to get them all — would result in 20 more tubers come the next harvest. In other words, it’s best to keep them contained. This might mean planting them in a raised bed that will inhibit their spreading into the rest of the garden, or setting them off by themselves and carefully turning up the soil in the margins and removing any encroaching tuber you might find. You might also consider growing them in a bucket, a technique that has more benefits than just keeping them contained (we’ll go into that later).

Native to North America, Jerusalem artichokes take well to a variety of climates and soil types. They do best in the northern third of the country where they are able to overwinter in the ground with the help of a good mulching. A few types are commercially available but we recommend searching out — through your community garden club or just over the backyard fence — someone who grows them locally and asking for a few tubers. Most anyone who plants the tubers will have plenty to pass around come fall. You can stick them in the ground then and heavily mulch or, best, start them in early spring a few weeks ahead of last frost. The earlier you plant them the larger your tubers and your harvest will be.

As always, turn the soil as deeply as you can and work in as much compost as you can spare. But, surprisingly, other than adjusting the soil pH to right around neutral — 7.0 — you really don’t have to do much at all. They’ll do well in almost any conditions, including heavy clay (but your tubers won’t be as large).

Make sure they get a periodic watering during the dry months of summer and shovel in some soil or compost if you can spare it to help anchor the plants as they grow. Sunchokes will become tall, maybe six feet or better, and their small but beautiful late-season blossoms will remind you of sunflowers. Thinning isn’t necessary once things get sprouting, except around the edges of your patch. Any thinning you might do in the patch will set back the development of tubers.

Jerusalem artichokes are seldom bothered by disease and insect pests. If you experience rot — and we never did even in the extremely rainy climate of the Pacific Northwest — dig up the soil and improve drainage with sand or organic material such as peat moss or coconut coir.

Wait until well after the first frost to harvest, then use a garden fork to turn up the knobby tubers. Harvest only as many as you need and leave the rest in the ground, under heavy mulch if conditions will turn extremely cold. If you do live in a cold region somewhere where you’ll want to harvest all at one time, do so carefully and discard any that are cut or damaged (see “hogs” above). Keep them in the refrigerator rather than a root cellar. Cold conditions are best for their storage. Save a few for replanting next spring if the ground freezes hard where you live. Otherwise, just harvest from beneath the mulch, as needed

We used to tether our goats in our modest sized patch and let them take down the stalks and any tubers that came with them once they started to die back. Otherwise, you’ll want to clean up the patch as best you can come late fall. By then the stalks will make a poor addition to your compost heap — they’re too woody — unless you can put them through a shredder.

No matter how well you harvest and clean up the patch, it will show itself again the following spring, and probably be larger than it was the year before. Don’t be afraid to thin out the shoots just as they appear (but don’t wait too long). Some tubers will certainly follow them out of the ground but that’s okay as long as you do it early enough in the season.

We gave some tubers to a neighbor who cut two or three of them in halves then planted them in a five-gallon bucket. He let his kids water and soon enough the stalks were taller than they were. In the fall, they just turned the bucket over and emptied out the contents. The kids had a good time picking through the soil and finding all the tubers. And they never experienced the problem that many have with Jerusalem artichokes: having them spread beyond their patch. Also, they didn’t have so many that they couldn’t eat them all.

Jerusalem artichokes are rich in fiber, a great source of potassium, iron, and some B-vitamins and vitamin C. They’re high in fiber and their carbohydrates come mostly in the form of inulin. This reduces the caloric value of their carbohydrates. Though not to be confused with insulin, the sugars that come from the nutty-flavored tubers are slowly digested, making them more appropriate for diabetics. Inulin also encourages the development of intestinal flora or probiotics. This is a good thing, but may lead to increased flatulence (funny, we never noticed a difference, but have heard others, usually the spouses of those who experienced it, complain). Beano, anyone?

Sweeter than potatoes (especially after cold storage), Jerusalem artichokes are good mashed with butter and sprinkled with pepper or nutmeg. One of our favorite ways to use them is creamed in a soup with carrots, squash and, often, sweet peppers. We also enjoy them sliced and stir-fried in olive oil with a handful of pearl or cipollini onions. If slicing them for raw use, treat with a little lemon juice. Otherwise, they’ll brown quickly.

Have a favorite recipe? Let us know, in the comments or over on Facebook. And no, that really was the dog. 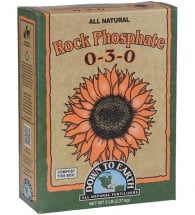 A long-lasting source of phosphorous -- ideal for flowering trees and shrubs! 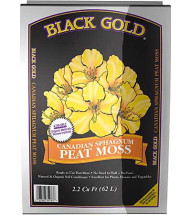 Perfect for acid-loving plants like azaleas, rhododendrons, roses and conifers. 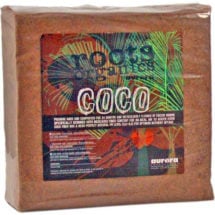 Soak compressed bale in water to expand. One 5-kilo bale makes up to 16 gallons.