Lessons from the Garden

A crow, a row of seedlings, and repeated frustration spotlight the adaptability and ingenuity of gardeners. 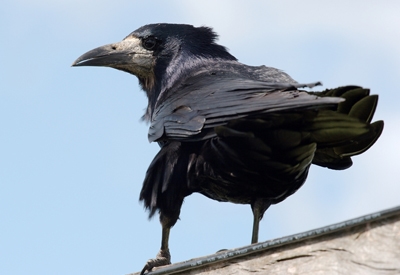 A friend of this blog, someone who’s good at seeing the big picture, writes in to tell us about a problem solved and how it reflects on the art and craft of gardening. It’s a good example of how we develop our gardening techniques over the years by paying attention, considering all the variables, and measuring the results. We’ve added a few follow-up links in his story, as we do in ours:

Our family loves sweet corn and every year I plant a “square” of corn; four or five-foot long rows, two of the rows planted a week or two after the first rows went in, an often in-vain attempt to extend the harvest. Somehow the corn all seems to arrive at the same time no matter how I stagger the planting.

Planting in squares like this makes yearly crop rotation easy in our modest, sun-washed garden. And the second planting is always “down-sun” of the first, ie on the south or west. This avoids the first, more advanced planting from shading out the second planting. I learned this trick the hard way after planting the second rows behind the first only to watch them fall far behind.

I developed this technique over a few years after learning that corn is wind pollinated and a cluster like this allows the breeze to do its thing. My yields were noticeably better when I started using this technique. Don’t ask about the year I planted one long row.

We have a big yard and I always have plenty of compost to work into the soil. I rarely work in any other fertilizer (editor’s note: compost is an amendment, not a fertilizer. But it is well balanced, exactly what corn needs. If your soil needs beefing up, use a good organic fertilizer with an equal, or close, N-P-K balance.) Nowadays, weather permitting, we always have a few weeks to enjoy fresh sweet corn from the garden with some left over for freezing.

But not a couple years ago. Me and the kids had planted in our usual box layout. The spring was warm and before long we had those neat lines of corn seedlings, thick and beautiful, out of the ground and on their way. Then suddenly, I came out one morning and half of them were gone. Well, not exactly. They were scattered around on the ground, root and all. Something had plucked them straight from the soil.

It wasn’t long before one of my kids spotted the culprit. A crow landed in the garden and started to pluck out the seedlings that were left, one by one. He didn’t even bother to eat them and I don’t know if crows eat seedling anyway. Didn’t matter. He was destroying our crop, strutting around our garden like they do, as if he owned the place. My two boys took to chasing the bird off when they saw him. But he just kept coming back, sometimes with them out in the yard, and finished off what was left.

So we planted again. And I don’t need to tell you. As soon as the seedling were up the crow was back. Staking the dog out by the garden seemed to help, but for one day only. The next time I came out there was the dog laying there watching the crow do its thing. I ran out and gave them both a start.

It looked like we weren’t going to get much of a crop. But I wanted to save what was left. I went online and did the usual searches. And there it was, a way to protect seedling from birds until they got too big to mess with. The solution was simple. Cut off the bottom of liter plastic water bottles then place them over the seedling so the bird can’t get to them. Simple.

I went to the recycling to find that we didn’t have anything close to the liter size. All we had were three 20 ounce vitamin water bottles. Don’t ask. I cut off the bottoms, took off the lids and, with a flashlight, set them over three of our precious, remaining corn seedlings.

The next morning, it was a Sunday I think, one of the boys was yelling at me. The crow was back. We watched from the kitchen window as he began to get into the seedlings that remained. But he carefully avoided the three that were protected by the plastic bottles. In my reading, I’d found a recommendation for placing mirrors in the rows or hanging old cds, from what I didn’t know, to frighten birds away. Seems they don’t like their reflection. As for the mirror idea, it seemed way too much trouble. How many mirrors would you need? But the reflection in those bottles. Maybe that was why the crow wasn’t going anywhere near the bottles.

Until he did. He started working on a bottle, pecking it as if he couldn’t figure out why he couldn’t get to what he wanted. So far so good. Then, we could see the bottle start to tip. “Look, dad,” the kids shouted, “he’s tipping it over.” Tell me something I didn’t know.

Sure enough the plastic bottle fell over. The crow just stood there and looked at what happened. Then he plucked the seedling and threw it aside. Like it was some kind of game.

We actually had fun watching the crow deal with the other two bottles. He pecked and nudged the second until he worked it from the ground and it fell over. Again he just stood there for a while like he didn’t know what to do next. He did. The last bottle he actually lifted his foot to push it over. Short work for a fast learner. For some reason he didn’t even bother to pull that seedling.

We decided to start collecting bottles of all sizes from the neighbors and pushing them deeper into the soil. That seemed to work but we only got a few stalks of corn growing that year, otherwise a good year for growing corn. We bought most of what we ate at the Farmers Market.

Over the winter, the answer came to me while I was thinking about how dad used to cover the strawberry patch with netting to keep the birds out. Row covers. We tried suspending some visqueen over stakes set along the square of corn but the wind played havoc with it. And when it didn’t, it seemed to make things two hot under the plastic. We did see a crow, who knows if it was the same one, poking around under the edges, looking underneath like he was thinking of crawling under but, as far as I know he never did. Eventually I bought self supporting row covers to use. I was never sure if the crow we saw poking around was the same one or not.

The whole thing got me thinking. As gardeners, we all face unique and unusual problems. You can read all the books and how-tos there are and they still won’t address that problem that comes up in your garden and nowhere else. The crow had made problems for us. We made problems for the crow. The crow didn’t let that problem, our plastic bottles, stop him. He kept poking and pushing and experimenting until he found a solution. That’s how gardeners deal with their problems as well. We think like crows.

Too little rain? Ways to get more vegetables from a small space? An invasion of grasshoppers? Crows pulling up your seedlings, raccoons pulling down the stalks and eating your corn before you do? Gardeners explore, study, and get all the information they can when dealing with their problems. But sometimes they have to come up with their own solutions. That’s what makes gardening mind expanding. And fun. 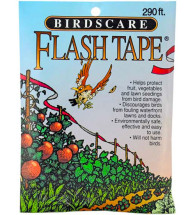 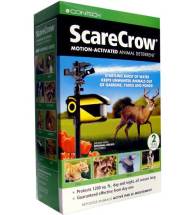 A burst of water from this motion activated sprinkler keeps animals away. 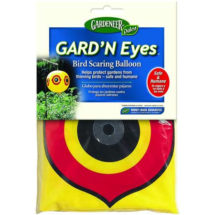 One Response to “Lessons from the Garden”