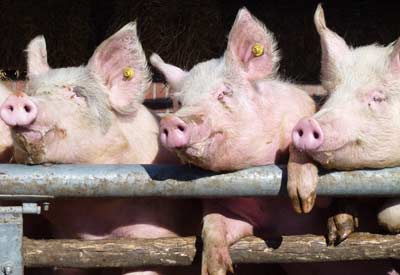 Food safety is a critical issue to those of us who care about the health and well-being of our families. But those issues seldom surface in the mainstream media and then only when death or a massive recall is involved. Smaller, localized news items and changes in the regulatory and inspection systems that are supposed to guard us from contaminated food often pass under the radar.

That thought occurred to us this past week when we read investigative journalist Ted Genoways’ opinion piece about changes in U.S. pork inspection already being tried at a number of packing plants and soon, possibly, to be rolled out across the entire industry. Here’s how that piece opens:

If, thanks to an experimental inspection program, a meatpacking firm produces as much as two tons a day of pork contaminated by fecal matter, urine, bile, hair, intestinal contents or diseased tissue, should that count as a success?

The story goes on to tell about a pilot inspection program begun in 2004 at three Hormel pork processing plants that remove federal inspection of all but select hog carcasses and replaces it with inspection provided by the processor. The result is favorable, at least in the number of hogs Hormel can get through these plants. Genoways reports that Hormel went from processing 7,000 hogs per work shift to 11,000 per shift.

Yet the new program did not do what it was supposed to: keep diseased and contaminated meat out of the food supply. Some of Hormel’s own quality assurance auditors began to question the program and the U.S. Department of Agriculture’s own inspector general’s report on the program (PDF), as Genoways writes, is “damning.”

What it comes down to is this: “Enforcement of food safety protocols was so lacking at the five plants participating that between 2008 and 2011, three of the five were among the 10 worst violators nationwide (of 616 pork processors),” as Genoways reports. But by 2013, when the program found that five to seven contaminated animals per 10,000 would pass through the system, a number the report called “exceedingly small.” But, as Genoways reports, that means some 4,000 lbs of contaminated pork would pass into the food chain a day from Hormel’s exceedingly large operation. Do you want to take the chance that some of that pork might end up on your table?

Programs that privatize inspection and favor the producers over the consumer have a history in this country. When the same sort of inspection process was applied to chicken processing, it might have been missed except for coverage by The Washington Post. And, of course, food contamination, isn’t just limited to meats.

So why, I’ve wondered, haven’t we heard about this before? Your not-normally paranoid Planet Natural blogger can’t help but fear that part of it comes from the influence that corporate agriculture has in this country and that keeping food safe isn’t sexy enough for media outlets wishing to attract viewers and readers to their screens and pages.

Like we said above: The mainstream media seldom reports on foodborne illness, despite the fact that contamination issues are on the rise and nearly everyone agrees that the safety of our food supply is a terribly important issue. And of course, it is terribly important when you consider that the Centers For Disease Control says that food borne illness affects some 48 million Americans a year and causes 3,000 deaths.

So where does one go for such information? We like the web site Food Safety News. It keeps readers current on recalls and FDA warnings as well as addressing safe food tips. They address some issues that we might not fully get behind. This old goat farmer and consumer of raw cow’s milk (until lactose intolerance and allergies struck) doesn’t think that raw milk is such a bad thing if you know first-hand where it’s coming from and how it’s handled. But commercial-grade raw milk? We’re not so sure (this is a huge topic in the natural foods world and we’d love to hear your comments).

We also like the website of the nonprofit Center For Food Safety when we’re trying to stay current on food supply issues. They’re also a good source for information on GMOs and the foodstuffs that contain them. And they get behind soil health and sustainability.

Our stock answer on the question of safe foods is always “grow your own,” often followed by the disclaimer that it’s something, considering your circumstances, almost impossible to fully do. Most towns frown on raising backyard hogs. But some of them are coming around to allowing chickens.

Getting to know you local farmer can go along way to feeling good about the menu you put on your table. Getting involved on the political side can also help. Does anybody ever ask a political candidate or an office holder where they stand on specific food issues, like the new pork inspection program? It’s time we — and the media — start joining those who are doing just that.