USDA Program For Bees Not Enough

Government needs to address the real problems behind bee decline. 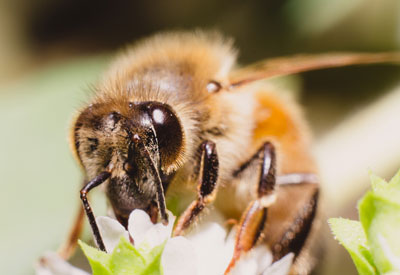 Those concerned with the fate of North America’s honeybee populations have mostly cheered earlier this month with the U.S. Department of Agriculture (USDA) announcement of $4 million in assistance for farmers, ranchers and forest landowners working to improve food sources for honey bees on private lands in Midwestern and northern plains states. Count your concerned Planet Natural blogger among those who aren’t cheering so loudly.

The bee program is being administered by the USDA’s Natural Resources Conservation Service (NRCS).

Here are the details:

In its announcement of the program NRCS Chief Jason Weller says, “The future of our food supply depends on honey bees. This effort partners with farmers, ranchers and forest landowners to ensure honey bees have safe and diverse food sources during a time when they need it most.”

Now we’re all in favor of expanding and improving habitat for pollinators. And while this money isn’t peanuts — it’s about as much as Congressional investigation committees spend on doughnuts (we’re joking!) But still… we can’t help to see the move as a smokescreen that hides what really needs to be done: Ban the pesticides that are in large part responsible for bee decline.

And we can’t help wonder if any of the companies that profit from the pesticides that are killing off bees in record numbers have anything to do with it.

Last May, the White House issued its “National Strategy To Promote the Health of Honey Bees and Other Pollinators (PDF).” It’s a long document with several good ideas. But there’s a problem. It doesn’t deal with what’s more and more agreed upon to be at the heart of the problem: pesticides, especially the class of pesticides known as neonicotinoids.

If it’s really true, as NRCS chief Weller says, that the future of our food supply depends on honeybees — and it does — you would think the government would pay serious attention. Instead they seem to be in cahoots with the chemical manufacturers.

Of course, as all champions of organic growing know, this is part of a larger problem. We need to take seriously the damage that pesticides of all types do to our health and environment. The die off of bees is a strong indicator of just how deep that problem runs and how severe its consequences are. It’s time once again to let our congressman know that we think they should start listening to our interest, and not those of corporate chemical and agriculture, if they want to keep their jobs.