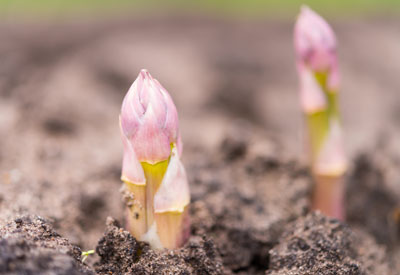 When I was a kid, we had an asparagus patch out at the far end of the backyard. It was already there when my parents bought the place, thus saving us the two to three years of waiting after planting before taking the first harvest. The plants were so big that in the fall, after the spears had grown tall and sent out thin, fern-like seed branches, we kids would burrow into the center of the bed to hide.

The best part of growing asparagus came in the spring when the first spears emerged, often beginning before we’d put in our vegetable garden. Most kids didn’t like asparagus but I did — maybe it was all the butter I’d slather on — and going out to harvest enough spears for dinner added to my appreciation. If memory serves, cutting asparagus from the ground was the first time I was allowed to use a knife.

I’ve had some bad luck with asparagus since, trying to start my own beds in a damp climate that encouraged the roots crowns I’d purchased a chance to rot before they sprouted. This happened two years in a row. 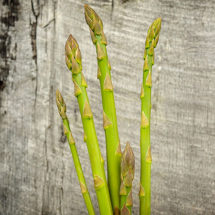 An old time variety that is highly esteemed in Europe for its delicious stems.

Delicacy incarnate. Precoce D’Argenteuil Asparagus is a treasured heirloom from France with flavorful stems and pale pink buds that turn white when steamed. Planting instructions are included with each seed packet and shipping is FREE! Need growing advice? Visit our vegetable guides for tips and information on specific types.

I might have succeeded if I’d planted them well into the summer, say Fourth of July, when rain was less frequent, rather than in April. But even then, the roots might have been done in by the winters. Asparagus needs a long, cold dormant season and the coastal climate where I lived, with its infrequent freezes and temperature swings, didn’t really offer one.

That said, asparagus is now being grown almost everywhere where winter is suitable. This means cold but not too cold. If you live in northern Minnesota or places where the temperature drops well below zero for nights at a time, forget it, unless you mulch heavily and get a thick, insulating blanket of snow.

If you live in Florida, the lack of real winter won’t do your asparagus any good. The plants will just keep producing continually, weakening and finally exhausting them. Inland locations in the state report some success, though the spears can be thin and spindly while the patches give out in a few years.

Given the right conditions, an asparagus patch can offer yields for 10 and 15 years once those first two are over. And because they suffer few pest and disease problems, they’re perfect for organic gardens.

Choose a spot that’s in full sun. Day long sunlight not only encourages production but cuts down on disease as well. Starting a new asparagus bed requires digging the area out deeply, then adding a lot of compost and maybe some sand — patches need to be well-drained — and rock phosphate.

It’s worth testing your soil’s pH before attempting asparagus’ long term investment. It doesn’t do well in acidic soil. Keep yours above 6.5 up to neutral and you’re set. It’s difficult to change soil pH once the crowns are in.

Generally, this soil should be the best you can make it. After all, it will go mostly undisturbed for at least a decade.

Crowns are planted in trenches, on little caps that allow the roots to spread. Dig the trench at least a foot deep — it’s said that deeper-planted roots give higher yields — and leave at least 15 inches between the crowns. Asparagus roots will fill in the open spaces during those two years you don’t harvest.

Soil temperatures should be 50 degrees or above. Cover the crowns with only an inch or so of soil. As they start to send up shoots, add soil until the trench is filled.

After my first failure, a neighbor suggested that I soak crowns in kelp extract before setting them out. I was never able to determine if this was a good idea. Seems to make sense, though. You want your crowns to hit the ground running.

Whatever you do, don’t let them sit around while you wait for the weekend to get them in the ground. If you must, wrap them in moss and stick in the refrigerator.

The best you can buy! Black Gold® Garden Compost provides organic matter and natural nutrients for flowers and vegetables — improves soil texture and structure. OMRI Listed for use in organic production.

I have no experience growing asparagus from seed and consider it something of a challenge. Most is started indoors two or so months before last frost. Light is important to the emerging plants. A windowsill just won’t deliver enough. Again, when transplanting, soil temperatures should be up to 50 degrees. Though the plants may seem small, give them plenty of room.

We’ve seen suggestions that transplants should go into a “nursery bed” for their first year before being transplanted again to their permanent homes the next year. If you know the benefit of this — considering the extra work it escapes me — then let me know. Lots of home gardeners just don’t have the space.

If you have at least a 90 day growing season, it’s possible to sow asparagus seed directly in the ground. Prepare the soil in the same way and plant 6 inches apart, prepared to thin (germination rates aren’t necessarily high). Which seed to plant? Heirlooms can be particularly tasty and no more difficult to grow. Most strains of asparagus, including Mary Washington and Jersey Boy, have been around long enough to qualify as heirlooms.

No matter how you plant your asparagus, weed the area carefully those first years before the plants have a chance to crowd weeds out. A weed-choked asparagus garden is an embarrassment to savvy gardeners everywhere.

Commercial asparagus floods American markets in the springtime, most of it grown too far south to have that homegrown flavor. Regional spring asparagus crops (along with rhubarb) are some of the first vegetables to appear at Farmers Markets and produce stands. This locally grown asparagus, found all over the Midwest, the North Atlantic, the high country South, parts of California and most of the Pacific Northwest, even New England is far superior to the stuff that comes to market from south-of-the-border. But in the end, there’s nothing better than homegrown, especially with lots of butter. 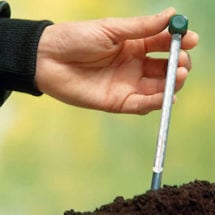 Includes a handy guide that lists the temperature ranges for over 25 types of plants.