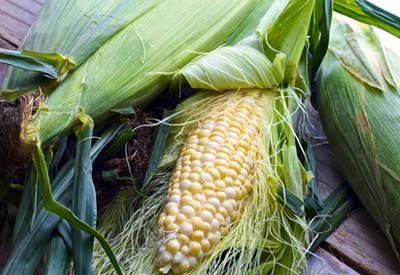 We’ve been offered sweet corn from a road side stand that wasn’t ready only once and that was from a couple neighborhood kids who got carried away with their picking. That experience turned out to be a learning experience for all of us.

The corn obviously wasn’t ready to harvest — the young gentleman hadn’t thought to pull back the husks to check — and we pointed out the short green silk as we bought an ear (cheap) and pulled away the cover. It was obvious. The kernels hadn’t plumped up and we showed that to the boys. We told them about testing the kernels when they did look ready — otherwise known as the pinch test — and what they would see. We pointed out that it was a shame they’d pulled all these ears that weren’t ready and now never would be.

Their father, our neighbor, was also unhappy about that. But the kids wanted to make some money and remembered their dad saying how well their corn was doing this year. Dad and I had a fatherly, adult laugh over the incident and chalked it up to the “boys-will-be-boys” syndrome that had excused both of us a time or two in our younger days. Later that season, the neighbor kids brought me over some of the ears with long brown silk and we gave one the pinch test. They already knew what to look for . . . corn milk! 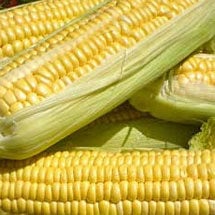 Nothing says summer like fresh picked sweet corn grown in your own backyard.

Nothing says summer like fresh heirloom corn! We carry various-colored and unusual varieties, both fresh eating, ornamentals and — everybody’s favorite — popcorn! Planting instructions are included with each ​seed ​packet and shipping is FREE!

Now we’ve been to farmer’s markets across the country and have never been offered an ear that wasn’t ripe or was past its prime. Can’t say the same for supermarkets. The problem we’ve experienced is not that the ears haven’t ripened but that they were well past their prime. A good market will always display a shucked ear or two and, if you ask your friendly produce manager, he’ll let you squeeze a kernel. When nothing comes out, it’s a sign that the corn is well past its prime time. That’s the time to come looking for my neighbor kids.

Most home gardeners are well aware of how to tell when sweet corn is ready to harvest. The clues are many. The first is a general sign that leads you to suspect its time; namely, two to three-and-a-half weeks have passed since the ear’s hank of silk has appeared. Warmer locations, especially those with warm evenings, will tend to the lower number. Cooler locations will tend towards the higher. The next thing to look for is browning silk. When the silk first appears, it’s yellow and pliable; even waxy. As the ears mature, the silk turns brown and becomes stiff. Pull the husk back just enough to reveal the tip of the ear. It should be dry at its end, not green or moist.

If you’ve gotten this far and all signs are go it’s time for the pinch test. You can almost be sure what you’ll find. Pull back the husk briskly and take a good look. The kernels should be plump and tightly packed. Stick a finger nail in a kernel not too close to the end. If the juice is clear, you still have a ways to go. But if it white or milky, then its time to begin the harvest. Worst, is to get no juice at all (or little). That’s an indication that you’ve waited too long.

We’ve always planted our corn in squares rather than long rows. Squares tend to allow for better pollination than a single row (experts recommend you plant at least three parallel rows to encourage pollination if that’s the way you’re going). Poor pollination results in what’s called “kernel skip.” If you do plant corn in blocks or clusters, the ears on the outside will mature faster than those facing inside the block. With a little experience, you’ll know well when corn is ready to pick.

The old dictum that you should set the water pot on the stove and bring it to boiling before you pick corn is still (mostly) true. Once picked, the sugars that make the corn sweet will start to convert back to starch. Some of the new super or “xtra” sweet hybrids hold their sugars longer and you don’t have to rush them to boiling water. Some of the most flavorful heirloom corns have more protein and mineral content.

How do you know when your corn is done boiling and is ready to eat? Stick the tine of a fork in a kernel. If it gives easily, as it would to your tooth, its ready. You can slice the kernels from the cob as grandma used to do for grandpa after he got his “new” teeth. But there’s a certain joy to picking up an ear and just working your way around it. Butter? Salt? Pepper? That’s up to you.

Grilling corn on the cob is also popular and easy. You can wrap it in foil after husking or, after removing the silk, cook it in the husk itself. Nothing completes a barbecue like grilled corn on the cob. Popcorn? That’ s something else again. 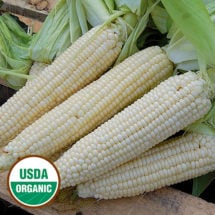 Backyard tested since the mid 1800s, Stowell's Evergreen is second to none. 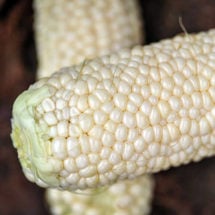 Tender and delicious, Country Gentleman is one of the best sweet varieties available. 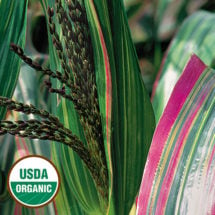 A magnificent ornamental variety from Japan that's beautiful in borders. 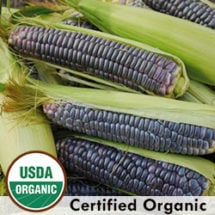 Miniature plants -- up to 3 feet tall -- can be grown in pots or containers. 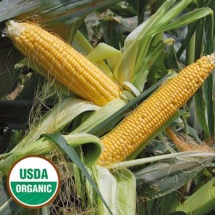 A short season sweet variety that has been grown in home gardens since 1902.