These Bugs Raise A Stink

How to identify and control the brown marmorated stink bug. 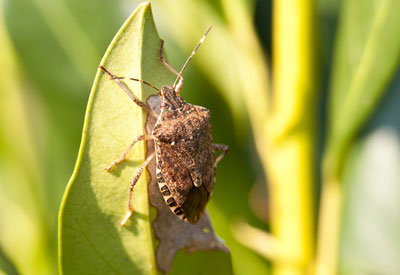 They landed on our shores in Pennsylvania some 15 years ago and have since spread across the country, leaving a trail of destruction behind them. Voracious feeders, they’re not content to destroy our food sources. They’ve come to occupy our homes in ways that have changed the very nature of our lives. In an all-out effort to stop the invasion, humans have joined forces to bring an end to their march across America. And while some progress has been reported, the battle is far from over.

While this may sound like some imaginary World War III scenario or the plot of an alien invasion film, it’s a very real and troublesome problem. Since the brown marmorated stink bug was first discovered in Allentown Pennsylvania, the pests have moved across the country. They’ve become a serious problem for vegetable, fruit and other farm crops in the mid-Atlantic states and have spread as far as the West Coast where they’ve become a nuisance in Washington and Oregon orchards. America isn’t alone in facing these little monsters that originated in Asia. They’re attacking Europe as well. 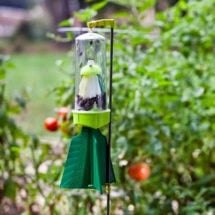 Captures ALL stages - both males and females - from nymph to adult. Poison free!

Defense for the Home and Garden! The RESCUE® Stink Bug Trap contains multiple pheromones to lure and capture pests from up to 30-feet away. Once inside, the device’s unique design prevents escape and the pest eventually dies of dehydration.

The worst damage from these little monsters is found in Pennsylvania, New Jersey, Maryland, West Virginia, and Virginia with surrounding states — New York, Ohio, Kentucky, Tennessee and North Carolina seeing increasing infestations. With no natural predators and plenty of food sources available, these pests are able to raise a stink. What do they smell like? The scent, as anyone who’s crushed one beneath their thumb, is strangely — and strongly — reminiscent of bad cilantro.

Stinkbugs are willing to feed on just about anything. They’ve done heavy damage to apple and peach crops but have also attacked figs, mulberries, blackberries, citrus fruits and persimmons. They’re known to feed on tomatoes, various kinds of peppers, both sweet corn and field corn as well as wheat and soybeans. They’ll even feed on the ornamental plants in your landscape.

Stink bugs are known to invade homes in an effort to survive the winter and to find ideal conditions for reproduction. If you’ve seen one, or a few stinkbugs, flying noisily around your inside house, there are probably many more hidden away in cupboards, behind furniture or around storage boxes. They’ll also congregate in the wall of houses if they can find a way in.

Certainly the brown marmorated stink bug, or BMSB, is more than a nuisance. In 2010, the infestation resulted in nearly complete destruction of peach and apple crops in some Pennsylvania counties.

Necessarily, scientists and government officials haven’t stood idly by. With funding from the United States Department of Agriculture’s Specialty Crop Research Initiative and the collaboration of eleven university agricultural departments, an organization devoted to learning about and stopping the pests — Stop BMSB — has formed to defeat the little critters. Their website is a clearinghouse of information both practical and scientific about stinkbugs.

Many (though not all) of the solutions they’re studying on how to prevent damage from stinkbugs will be of use to organic farmers. The threat posed by the pests is especially threatening to those who raise crops without the use of pesticides. As one researcher in a “Stop BMSB” video explains, there are certain crops that growers won’t be able to produce organically unless the stink bug is stopped.

The section of their website entitled “Stink Bug Basics” is particularly useful. Here you’ll find the various stages of a stink bug’s existence as well as ways to discern them from native stinkbugs. The “Managing BMSB” page links to the latest research and techniques for trapping and using natural predators against the bugs (parasitic wasps are among the most promising ways to control stink bugs — not commercially available). One page links to the most effective means found so far for organically controlling BMSB including the special problems stinkbugs pose to organic growers.

Made of premium grade spun-bond polyester, Harvest-Guard® Row Cover has “pores” large enough to let in sunlight, water and air, but small enough to keep out stinkbugs. Ideal for multiple season use, spring and fall.

Most valuable is the Stop BMSB page of videos which provide a comprehensive education on the stinkbug and its control (scroll down to video “Part Ten: Biological Controls” to learn about the use of predatory wasps).

Maybe the best way to get rid of stinkbugs in your garden is to use row covers to prevent them from gaining access. Any bugs found on the covers can be hand-picked and dropped in a can with water and some detergent where they’ll drown.

What if you have stinkbugs in your home? A Virginia Tech PhD student researcher came up with the most effective, non-chemical way to destroy the pest once inside your home. It involves filling an aluminum turkey pan, preferably recycled, with an inch or so of water and stirring in a little dish detergent, then shining a lamp (like a desk lamp) on the surface. Left on overnight, the light attracts the bugs who land in the water and are held by the detergent. These can then be vacuumed up with a wet-dry vac and disposed of.

The vacuum also comes in handy if you spot any BMSB around the house, alone or in clusters, as well as for those times when you might find a whole wall, inside or out, covered in the little stinkers. Again, a little water with detergent will help hold and kill any of the bugs you capture in the vacuum. You wouldn’t want them to escape…they’re prolific breeders.

Any experience with stink bugs? Let us know what you’ve found and done to prevent damage. Together, we can stop them.