How planting an early season cover crop can benefit your organic garden. 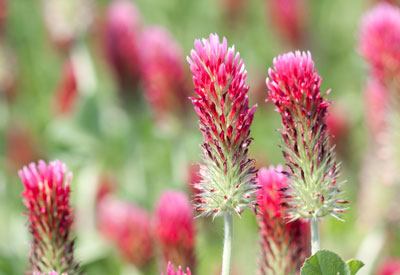 Everyone knows the value of cover crops or green manure: they add valuable organic matter to the soil, they prevent erosion, smother weeds, and help maintain soil moisture levels. The ability of pea or other legume crops to fix nitrogen makes them especially valuable as a soil addition. Most cover crops are planted in fall, given time to overwinter, and then turned back into the soil in spring. But is it possible to plant a cover crop in early spring and still reap benefits?

The answer depends on where you live. High altitude locations or those in zones three, four and higher are at a disadvantage. There’s usually only a short window between the last frost (or snow!), something that can happen as late as June, and the heat of the growing season. But zones five and above, especially those at non-mountainous elevations without micro-climate extremes, allow for a spring cover crop when specific conditions are taken into account.

Boost soil health … naturally! Planted in fall, cover crops protect soils from erosion and nutrient loss over winter. In spring, they’re turned back into the soil supplying organic matter and nutrients such as nitrogen.

If you live in zones eight or nine where danger of later frost is mostly non-existent, you just might want to plant a quick growing crop, like oats, winter wheat, barley, and spring mustard to use as a cover, ahead of planting corn, squash, tomatoes, peppers, and the like. If you can get them in during March (keep an eye on the weather and choose a time when temperatures won’t be too extreme), they’ll give you some organic material return before setting out vegetable plants in late May. Ryegrass has been a favorite for spring cover planting but its dense root structure tends to survive tilling. Then it reappears in the garden during the summer as a hard-to-control weed. Care should also be taken with mustard as it is known to harbor plant diseases that may harm other crops, especially those in the cabbage family. One nitrogen-fixing cover plant that’s gaining popularity for its ability to outgrow so-called “winter peas,” is the Canadian field pea. We haven’t had any hands-on experience with Canadian field peas but reports are promising.

Of course, the best time to plant cover crops is in the fall. Spring cover crops risk poor germination because of cold, wet weather. And the slow growing conditions, especially if you have a cool, wet spring, might mean few returns. On the other hand, it’s better than leaving your garden fallow, if, say, you didn’t get a cover crop in (or mulch) during the fall. No matter when you plant your cover crop, it’s a good idea to mow it — if it’s tall enough — just before turning it back into the soil. This encourages faster break-down.

And why not plant cover crops during summer? Red clover sown under tomato plants will help retain moisture in your xeriscape garden and will return some of the nitrogen your plants use up when you turn everything over in the fall. Cover crops grown between vegetable rows in the summer are not only a great way to retain moisture but add an attractive touch. Once established, you even encourage their dense growth by walking on them. And if you’re on them too much, you’ve already started the process of returning them to the soil.