The USDA Zone Map is used by growers to determine which plants are most likely to thrive at a location. 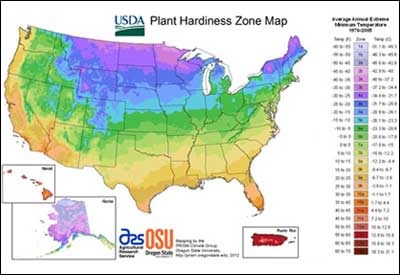 Did you miss it? Last January, the U.S. Department of Agriculture (USDA), in conjunction with Oregon State University’s Prism Climate Group (a great site for those interested in climate), updated their “Plant Hardiness Zone Map.” The map includes new features which should make it easier to use:

“For the first time, the map is available as an interactive GIS-based map, for which a broadband Internet connection is recommended, and as static images for those with slower Internet access. Users may also simply type in a ZIP Code and find the hardiness zone for that area.”

The new map can be found here. And yes, there has been a general revision because of new climate data:

“Compared to the 1990 version, zone boundaries in this edition of the map have shifted in many areas. The new map is generally one 5-degree Fahrenheit half-zone warmer than the previous map throughout much of the United States. This is mostly a result of using temperature data from a longer and more recent time period; the new map uses data measured at weather stations during the 30-year period 1976-2005. In contrast, the 1990 map was based on temperature data from only a 13-year period of 1974-1986.”

The Plant Hardiness Zone Map has been used by gardeners for generations to determine which plants are most likely to thrive at their particular location. The map is based on the average annual minimum winter temperature, divided into 10-degree F zones. Of course, other factors — soil conditions, amount of sunlight, moisture — are also involved when determining which plants are best for your locality. But to quote my grandfather, if you ain’t got the weather, you got nothin’.