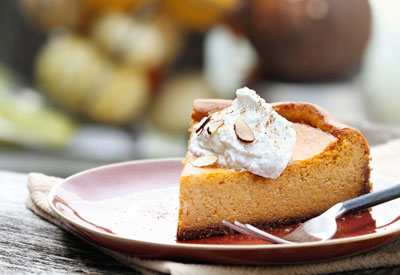 Squash pie. My grandmother didn’t make them — rhubarb pie was her specialty — but I knew households where women did. Those households almost always, as I remember, had gardens with winter squash patches.

Well, squash pies, sometimes masquerading as pumpkin, are all the rage this year. And butternut squash is the favorite choice, as this big-stuff newspaper video or this featured recipe from American Public Media’s popular radio program Splendid Table demonstrate.

Your desert-loving Planet Natural blogger wouldn’t say anything against pumpkins. But I would say something against canned pumpkin fillings. Canned fillings are often tasteless, little more than a bulky way to carry the sweet and spice flavor we associate with pumpkin pie.

You can do a lot better by getting a good pie pumpkin and roasting your own meat. There are plenty of recipes out there that tell you how to convert your home-roasted pumpkin into various types of flavorful pumpkin pie filling. You want an even better pumpkin pie filling? Grow your own pumpkins.

All heirloom pumpkin seeds offered by Planet Natural are non-treated, non-GMO and NOT purchased from Monsanto-owned Seminis. Planting instructions are included with each packet and shipping is FREE!

We’re betting that pumpkins are like tomatoes: grow a good heirloom and it’ll be tastier than anything you might get at the store. Heirloom pumpkins, known for their fine meat, are enjoying something of a renaissance. We’ve always enjoyed growing the small sugar pumpkin, an heirloom that’s been around at least since the Civil War, and then baking up a couple of the 4 lb or so fruits for pie. As you can guess from the name, the small sugar is sweeter than most. It’s also slightly earlier than most pumpkin varieties and its vines don’t trail quite as far as field pumpkins.

Anyone with ample growing room should consider putting in a pie-worthy pumpkin patch. Or if space is limited, you might try one of the “bush” pumpkins. Or you might just consider growing squash. Almost any good meaty squash can be used to make pie. (The meat of acorn squash is often too soft and wet for a good filling.) Any good pie recipe will do. Just substitute squash for pumpkin and adjust the spices and sugar to suit its flavor.

Where does that flavor come from? Baking winter squash releases something of a concentrated caramel flavor that pumpkin just doesn’t have.

Personal note: We started making pies from winter squash when we had plenty of them and needed ways to work into our menus. People loved them. We didn’t know that squash pie is a Southern tradition. We also grew pumpkins in those days but almost all of them went to school for Halloween decorations, something my pie-loving grandfather thought a waste.

Even if you do use squash, you can still call it a pumpkin pie. Pumpkins are a sort of squash, most defined by color and that cheese-wheel look. The fine folks at Baker Creek Heirloom Seeds don’t even separate the two in their catalog (yes, we carry their seed). Cucumbers are also in the same family but I wouldn’t recommend making a pie of them.

Mixing squash meat with a pumpkin filling adds flavor. And if you’re stuck using the dreaded (my opinion) canned pumpkin, it’s flavor can be boosted by adding mashed yam in an amount equal to the pumpkin. To our delight we’ve found that this makes an extremely flavorful and textured pie.

We’re running a taste-test this year, making one pie from locally grown organic small sugar pumpkins, and one from a single large butternut squash. We’ll use the same pie seasoning — ginger, nutmeg, cinnamon, cloves, and all spice — in both pies and, of course, the same whipping cream. After opinions are gathered, they’ll be revealed to you. In the meantime, does anyone have a good pie crust recipe? Actually, that was one of grandma’s greatest gifts to us: her pie crust recipe. Now where can I buy some lard?