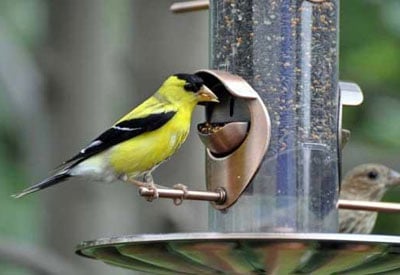 According to Reuters, Scotts Miracle-Gro company will be fined $12.5 million for illegally including pesticides in bird food products. The company pleaded guilty in February to the charge that it violated the federal law governing the use of pesticides. The fine includes $2 million that will be spent on “environmental projects.” The penalties, according to the Justice Department, are the largest in the history of the Federal Insecticide, Fungicide and Rodenticide Act. A company spokesman says Scotts has taken full responsibility.

Truth-Out.org reports that the company voluntarily recalled products that it treated with pesticides. Why Scotts treated the bird seed with the knowledge that those pesticides were toxic to birds, fish and other wildlife is the central question. Scotts says that the pesticides were added to the bird seed to prevent insect infestations. The Audubon Society reports that Scotts falsified pesticide registration documents and distributed pesticides with misleading and unapproved labels. Scotts reportedly sold more than 70 million units of the bird food, branded as Morning Song and Country Pride, between 2005 and 2008.

What’s not divulged in the stories is how it was discovered that Scotts birdseed contained pesticides. The insinuation is that Scotts itself eventually reported the problem rather than having it discovered by private or government oversight.

Since the publication in 1962 of Rachel Carson’s Silent Spring — still required reading for anyone interested in the roots of the organic movement — we’ve known the hazards that pesticides present to birds. That something like this has happened in the 21 st century, as threats to songbirds and other avian creatures is on the rise, is an outrage. Organic gardeners know that birds are part of the joy of being outdoors (even when they can be pests). Attracting birds to your yard and providing natural sources of food are part of organic gardening practice. Pesticides in bird feed? Next thing you’ll tell us is that there are pesticides in the human food supply… oh, wait.

Scotts has also been the subject of controversy for it’s genetically-modified, Round-Up resistant blue grass seed. Critics say the seed was developed and sold without proper government oversight.