Ornamental Berries for the Holidays

Red holly and ornamental berries of all hues bring color to winter gardens. 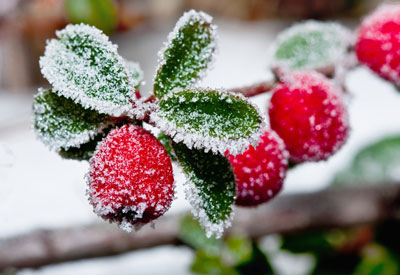 Almost any holiday display with trees or pine boughs or bunting is enlivened by a show of bright red berries. They’re like a splash of color on the cold gray winter. We equally, probably more so, like to see berries outdoors, naturally, in our yard and neighborhood. If those berries are in your yard, you’ll probably recall the spring blossoms that preceded them. We love to see ornamental berries in our hedges and against fences, especially when a light touch of snow gives them sharp contrast.

Of course, this time of year we’re seeing holly berries. Holly played an important holiday role when we lived on the rainy Pacific coast. We’d cut holly early and let it dry in our attic, making sure to keep an eye out for mold. When it came time to ship presents back east, we’d pack the boxes with holly. The holly served as both protective padding but also as decoration once it made it back to the high plains.

Holly berries are particularly attractive against its sharp-pointed, waxy evergreen leaves. But some places just aren’t suited for growing holly plants. The bushes do best in places with damp, cloudy winters and acidic soils as found in the Pacific Northwest. Bright, cold, high country locations with alkaline soils just aren’t conducive to holly growing; parts of middle America as well. Some non-traditional types, including hybrids, are better adapted.

There are other red berries that can be grown of course, though not all are suitable for inside decorations. The “Afterglow” variety of wintergreen is hardy and will adapt to some shade. Some honeysuckles produce attractive fruits after flowering. They don’t have to be vines. Shrubs including cranberry cotoneaster, with its draping branches, give beautiful spring blooms and rich berry displays come winter.

Not all ornamental berries are red. Elderberries are both ornamental and edible, though they were considered a ditch weed a generation ago. Beautyberries come in attractive white or purple fruits. And any number of berries, including blueberries, provide beautiful fruits. Problem is, they don’t last too long before we’ve eaten them all up. There’s nothing left of their beauty by the end of summer, let alone winter.

And that’s the point. In the season of garden planning it’s good to think of your landscape in all four seasons, winter included. Winter might be the hardest to imagine but, this time of year it’s the easiest to experience. We look for evergreen ground covers or junipers, with their little blue berries. And we’re interested in dimension, how some seed pods on long stalks collect snow or how a crab apple tree looks, its bark intriguingly colored, with a light dusting. But mostly we look for berries, hanging like ornaments, from shrubs and vines and trees. That’s where we find color in winter. Shouldn’t gardens be a source of beauty in inspiration, even when the growing season is far past. Tell us about your winter landscape, what it looks like, snow-country or not. And don’t forget to mention the berries.