Sowing the Seeds of Change 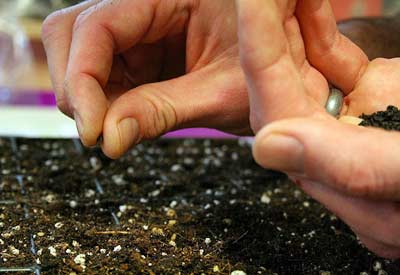 After decades of limited availability and dismissal as a counter-culture industry, heirloom and organic seeds are the center of interest as never before. This phenomenon has been going on for a few years, but its continued growth and the promise of an even bigger future can make even the most cynical of us more optimistic.

Look around. Organic heirloom seeds are available in an ever-widening array of outlets. Nurseries, even hardware stores now stock organic seeds. Even my local grocery store stocks them as do our local food co-ops. Not only are they more widely available, they’re available in wider selection. Seed companies that weren’t even on the radar a few years ago now put out big glossy catalogs offering heirloom and “pure seeds.” Large activist organizations, like the Seed Savers Exchange, have dedicated themselves to preserving our garden seed heritage. Smaller, local organizations and exchanges are also popping up.

Why all the activity? Growers — both home gardeners and commercial organic growers — saw that the varieties of vegetables and flowers available to them was shrinking. They saw that the commercial consolidation of the seed industry and the rise of patented hybrid seed gave them fewer options and higher prices. Seed that had adapted to regional growing conditions in certain locales, the kind most useful to organic growers, was disappearing. Many of those same seed producers were giant corporations that were also tied into the genetically modified seed industry.

But also many growers were concerned about health and self-sufficiency. They didn’t want to depend on corporate industry to supply their seed. Consumers demanding healthier food were buying more and more organic produce. Home gardeners, resisting commercially processed, chemical-laden foods began putting their families first and growing vegetables without potentially harmful herbicides and pesticides. They wanted to gain control of what they put on their dinner tables.

Many farmers and gardeners just wanted to grow their own seeds, as was done generations before agriculture became big business. As John Navazio points out in his recent, comprehensive book The Organic Seed Grower: A Farmer’s Guide to Vegetable Seed Production, the “model of seed companies being the exclusive purveyors of seed really only existed roughly for the past 50 to 100 years.” That’s left fewer and fewer people who have the skills to produce high-quality seed. Fortunately, we may have reached a turning point in that decline.

The grass-roots movement — maybe we should say plant-roots movement — to buy, raise, plant, save and exchange organic and heirloom seed is the most encouraging thing your hopeful Planet Natural Blogger has seen in a good while. I’ve frequently claimed that organic gardening has the potential to save the world. Now it’s beginning to look like we’ll have the seed to do it.

One Response to “Sowing the Seeds of Change”