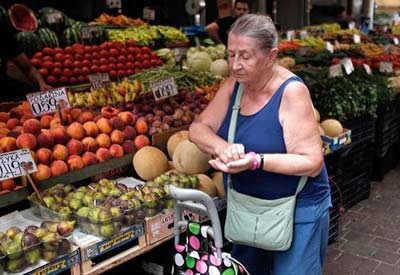 Your friendly, neighborhood Planet Natural Blogger, like pretty much everyone with an organic garden in the backyard, supports locally-grown, small farm, sustainable agriculture. We buy a lot of organic grains, vegetables, fruits and meats because, well, we simply can’t raise anything close to our yearly needs of everything in our yard’s growing space. We like to buy them from responsible, nearby farmers as much as possible. But there are seasons — like the one we’re in now! — where that isn’t always possible, excluding things like meat, milk, eggs and root vegetables. Everything else comes from elsewhere.

We’re not so different than a lot of people. That’s why it was interesting to discover the story of LavkaLavka, a Russian cooperative that brings together some 100 small, organic farmers. The foods these farmers raise are sold in Moscow at five shops, two cafes and a full-fledged restaurant. The rest of the country? They have a website.

The LavkaLavka story is even more interesting than it first appears, adding elements of international diplomacy and trade regulation, entrepreneurship and foodie culture to its local-growers slant. The best take away from the story is that consumer interest in organic, locally-grown foods isn’t just an American and western European phenomenon. People everywhere want healthy, flavorful, sustainably grown food. If it’s an animal protein, we want it humanely raised and harvested.

LavkaLavka was founded by Boris Akimov, a former magazine creative director, whose interest in food drove him out in the countryside around Moscow looking for farmers who offered fresh produce, eggs and milk. Friends began putting in orders when they discovered the quality of what Akimov was bringing back, and in 2009 LakvaLakva was founded as an internet business that delivered farm products to urban dwellers.

At first, Akimov had difficulty finding farmers who met his criteria. Now they lineup to sell him their foods.

Akimov’s interest was sparked by an old Russian cookbook. He wanted to find ingredients, some of them heirloom, that the old recipes called for — things like scorzonera, the black-skinned, white fleshed perennial that’s often compared to salsify. The more he traveled, the more he found small farm operations that had sprung up — organic growing is a growth business in Russia (all puns intended) — or that large-scale agriculture had not displaced.

LavkaLavka subscribes to the idea, shared by us here at Planet Natural, that supplying a lot of consumer information, be it growing tips or the scoop on the farmers that raise the beets, is a good thing. Knowledge is always a good thing. Maybe that’s why LavkaLavka’s business has grown substantially over the years.

Now politics has intervened. In August, Russian President Vladimir V. Putin, in a tit-for-tat action against Western sanctions regarding Russian involvement in the Ukraine, banned all imports of beef, pork, fish, fruit, vegetables and dairy products from the European Union, the United States, Canada, Australia and Norway for one year. Since then, Akimov’s business has skyrocketed as has the business of other small growers and producers. Even large-scale grocery suppliers have contacted Akimov about amounts he couldn’t come close to supplying.

The encouraging thing about the success of LavkaLavka is its demonstration that the desire for healthy, flavorful food is universal. People favor the local-grown concept and Russian prime minister Dmitri A. Medvedev tried to play off this favor saying “The aim of our efforts is to increase our own agricultural produce and to reduce Russia’s dependence on food imports.” The truth is that, like America, the vast majority of Russian agriculture is devoted to growing single crops, like wheat, and corn and soy that are used to make processed products, everything from high fructose corn-syrup to fuel. Not nearly enough farming effort is devoted to growing food. The lack of diverse food crops in Russia is complicated by their long winters. In their current big-ag model, they just have to import food.

So here’s the good news: the small farm, organic revolution that’s been going on for some time now in America has now landed in our old (and new) cold war rival. People in Russia are demanding diverse and organically grown food stuffs and have shown they don’t mind paying more for it. Running alongside it there is another movement, that to revitalize traditional Russian cooking. The two — as they do in America — go hand in hand. I think it’s called the real food movement.