Heartened In the Heartland 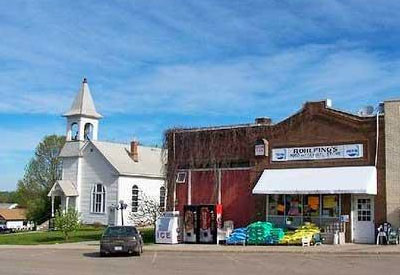 Your friendly and oh-so-curious Planet Natural Blogger has just returned from a tour of the heartland, a family trip that gave perspective to the state of midwest farming — both big and small — in an area that’s popularly known as “the bread basket.” While the trip had goals other than surveying the local agriculture scene — Mom hadn’t seen Aunt Betty up in White Bear Lake in years and, well, they’re both getting on — it did provide a (mostly) back roads look at how much of the rural landscape, despite years of housing development around the major cities, is still devoted to farming. We’ll let sociologists discuss the decline of rural small towns and their surrounding poverty. Let’s just say we saw examples of both: small towns that had found an economic niche, sometimes based on local agriculture, and others that were dying a slow death.

We traveled from eastern Nebraska through northwest Iowa and through the Minnesota River Valley of — where else? — west and central Minnesota (the Minnesota River Valley, home to the town of LeSeur and its namesake peas, is also known as the Valley of the Green Giant). There was plenty of evidence of the summer’s drought: fields of corn standing abandoned or half-dead or long since turned back to the soil (we’re always glad to know that many big farms employ wise-use methods of the same sort that we vegetable gardeners do as a way to improve soil). Our Nebraska farmer brother-in-law reported stories both good and bad; yes, the drought had cost some farmers their crops, but some farmers in their no-irrigation country still managed to get respectable yields.

Other things we noticed… almost every town had a banner up announcing a farmers market. Big cities like Omaha, St. Paul and Minneapolis had more than one, some of those markets were held more than once a week, and surprisingly small places like Spirit Lake and Estherville, Iowa also had weekly, seasonal markets. Also surprising were the numbers of farms, surrounded by huge fields of corn and soybeans, that offered roadside stands with pumpkins, apples, melons, winter squash and even sweet corn at this late date. Another reassuring sign was the number of gardens, often full of corn, cucumbers, cabbages and the like, sitting next to nearby farm houses. Farm gardens — so common back when — seemed to disappear in the plant-every-inch days of the ’70s and ’80s. We had no way of knowing if these were organic gardens, or how much of the produce offered at the farmers markets was organic. We saw the word “organic” on only one sign at a road-side apple stands that were sprinkled around the parts of Minnesota we traveled. But the sight of people growing their own fruits and vegetables, or small farms offering their crops to locals and travelers, always encourages us.

The most obvious observation was how much land is involved in commercial agriculture and what a huge industry it is. It was harvest time and giant tractors, combines and grain trailers were everywhere. Much of the corn — grown for who knows what purpose (animal feed? corn syrup? ethanol?) — was in, especially in the south. Some farmers were just starting in on their soybeans. Some fields were starkly weed free. Others were dotted with invading plants, often corn. We had to wonder if Roundup resistant corn was a weed when it showed up in a Roundup resistant field of soybeans. Occasional signs marked the brand of seed that had been planted in a particular field and we were glad to see the names of independent seed producers we knew from decades past. We never once saw a field boasting that it had been planted with seed engineered by Du Pont or Monsanto. But we were reminded — and a little research confirmed — that familiar names like DeKalb and Pioneer (our brother-in-law’s father sold Pioneer seed out of his barn nearly a half century back to help make ends meet), had some time ago been bought up by (respectively) Du Pont and Monsanto. Overall conclusion: the more things change the more they stay the same. But we were also heartened — in the Heartland — to see that some of that change was for the better.