... and other good gardening news for the New Year. 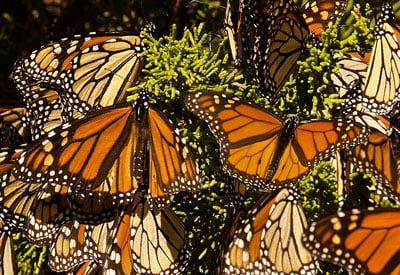 Life under a daily barrage of bad and often frivolous news can be unsettling. The good things that happen are often overshadowed by the sensational. But small things matter, too. In that spirit, here’s some uplifting news of interest to organic gardeners and a silver-lining spin on a story that otherwise might be thought downcast.

Weather predictions, though, are putting a damper on the improved numbers. Long-term forecasts for a colder than average winter in Mexico have experts concerned that the monarch’s spring migratory numbers might be down. The Times article also shows the growing realization of what it is that truly threatens these beautiful pollinators:

“The butterflies are at their most vulnerable moment because of pesticide use in the United States, climate change along their migratory route, and degradation of the forests where they winter,” said Homero Aridjis, a noted writer and environmentalist.

Did someone say “pesticide use?” On the good side, more and more home gardeners are avoiding pesticides in their own landscapes and growing native plants (PDF) to attract butterflies and other pollinators.

Cause of bee colony collapse: 2014 will go down as the year that scientists and even a few governments settled on the main culprit that’s been wiping out entire hives of bees. The problem, first generally noted beginning in 2006, is primarily based on the rise of neonicotinoid pesticide use, one of the more widely applied substances in modern agriculture. Even pro-business magazines, including Forbes, published stories blaming the pesticide class.

Of course, the disinformation continues.

Now to get down to the work of banning neonicotinoids or, like the Europeans, placing a moratorium on their use.

Surge in organic sales continues: Consumers continue to demand more and more organic produce from food retailers. Apples lead the way but the increase of well over 11% from the previous year is seen across a wide-range of fresh fruit and vegetables. Some 10% of all produce sold in the United States is now organic. That percentage continues to climb. The upward trend continues to grow in other countries as well. Interest in growing heirloom vegetables and fruits is also at a peak.

Now that’s how to breed new sweet corn: Here’s a reassuring story on the development of a new, cool-season sweet corn. The effort brought together professor and agronomy department chair of the University of Wisconsin Bill Tracy and a handful of graduate student research assistants with organic farmer Martin Diffley who wanted a more vigorous, more tasty corn strain that would take well to cool, Minnesota growing conditions. The open-pollinated corn (it will produce viable planting seed unlike hybrids patented by Monsanto and others) was entirely developed under organic growing conditions.

The new corn goes under the name “Who Gets Kissed?” Why does that corn sound so good to us?