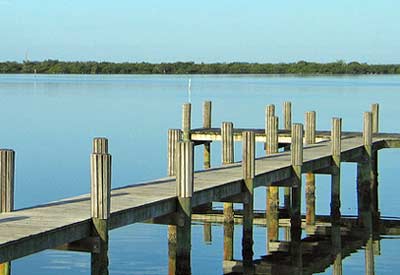 One of our favorite places in this beautiful country is Florida’s Indian River. The Indian is not really the kind of river we usually think of. It’s a long, narrow estuary on the east coast of Florida running from Merritt Island (which holds Cape Canaveral) all the way down to Vero Beach.

Protected from the open sea by a long string of islands (which also protects the mainland from hurricane waves), the River was once an ecological wonderland. Your once footloose Planet Natural Blogger spent a month working at a Marina near Neptune, Florida near where the Sebastian Inlet provides access from the River into the sea. We enjoyed rowing through the quiet waters, fishing off the nearby islands, and watching dolphins cavort just off the dock where we often spent the end of the day. A nearby wildlife refuge, one of the country’s first, had been designated in an attempt to save the then-endangered brown pelican. That attempt was wildly successful.

But ecological victories in this day and age are often short-lived and now, the Indian River is in big trouble. Hundreds if not thousands of pelicans have perished along the Indian River and its system of estuaries already this year. And that’s not all. Some 300 sea manatees, those big gentle creatures of Florida, have also died there, as well as “scores” of bottlenose dolphins. What’s going on?

Answers to these kinds of questions are never simple but it appears that the area’s sea grasses — food for the manatees and the breeding grounds of many species of fish, are being overwhelmed by algae blooms. Why? Because of too much nitrogen and phosphorous coming into the water, much of it from fertilizer run off. Why is there so much fertilizer? Because the Indian River has seen an explosion of development, which means tens of thousands of fertilized lawns. Runoff from these lawns goes into storm sewers and, untreated, goes into the River. The process, repeated over many years, has pushed the Indian River to the tipping point. The New York Times has more on the story.

Fertilizer runoff isn’t the only problem here. Many of these new homes are not on sewer lines and have septic tanks and it’s believed that some drain into the River. There’s also agricultural runoff, mosquito abatement spraying, and water temperature changes that contribute. Time is also a factor. Over the years, sludge and runoff have settled to the River’s floor, accumulating to the point that its once sandy bottom isn’t suitable for plant and fish life.

The Indian River’s problems clearly illustrate the complexity and accumulative effects that contribute to die-off at this level. And it demonstrates that once a tipping point is reached, it’s very difficult to turn back the clock.

The cynical among us might ask what difference it makes to lose a few dolphins and manatees. But the environmental damage has real economic consequences. The extreme loss of seagrass in 2011 — some 60% of it — caused an estimated loss to commercial and sportfishing interests of some $235 to $470 million in 2012. It’s estimated that the estuary supports some 15,000 jobs and contributes $3.7 billion to the Florida economy. Scientists were hoping for some $2 million to help deal with the problem. But Governor Rick Scott slashed those funds from the state budget. Critics also point to the state’s elimination of pollution control and water safety regulations that have occurred since 2009.

Several problems must be dealt with to save the Indian River. But one of the main steps that needs to be taken is to eliminate the high levels of chemical fertilizer and herbicides applied to those lawns. Organic fertilizers, whether growing grass or other plants, can go a long way in solving these problems. Sure, nitrogen is part of growing a successful organic lawn. But not applied at the levels that commercial lawn care companies apply it, or in forms prone to runoff that aren’t absorbed into healthy soils. Established lawns can get most of the nitrogen they need just by leaving behind the clippings after mowing.

Even those many years ago when we worked on the Indian River, we were warned not to eat too many of the sea trout we caught in the sea grass or to swim in certain places. If only institutions, businesses, and government agencies had taken steps to correct those looming problems then, we might not be at the tipping point — or past — today.