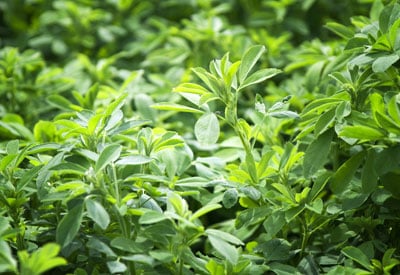 Organic gardeners know the value of sowing cover crops. Often referred to as “green manure,” cover crops are thought most valuable for what they return to the soil. Protecting the soil from hard rains, wind erosion, and other effects is seen as a side benefit. And, too, a cover crop discourages weeds, by crowding them out or inhibiting their growth.

Sometimes, cover crops are planted primarily to control weeds. Planted with this purpose in mind, cover crops become smother crops. They work best when dealing with perennial weeds but can also help starve out annuals when used over consecutive seasons. And they can be as effective (or more) on some of the worst perennial weeds. Let me tell you a story.

Boost soil health … naturally! Planted in fall, cover crops protect soils from erosion and nutrient loss over winter. In spring, they’re turned back into the soil supplying organic matter and nutrients such as nitrogen. They’re the green way to nourish your garden.

A friend of mine with a quarter acre garden and a hankering for self-sufficiency (or as he called it, saving money) decided that his garden just wasn’t big enough. He was set to adopt two more kids (long story, but when those two sisters were found to have a baby brother, the adoption total came to three) and he thought he could use the extra ground for crop rotation and maybe raising a little surplus that he could sell at the local farmers’ market. He had his dad come over with the old International Farmall and made quick work of turning over a well-measured part of the pasture adjacent to the existing garden. So far, so good.

The demands of three new children under the age of five, one of them less than a year, took up more time than imagined — the family already had five other children of grade school and junior high school age, three of them adopted — and the roto-tilled land stood fallow during the growing season. That was all the invitation Canadian thistle needed to move in.

The land went unplanted the next season as well and by then the invading thistles had become an infestation. He knew that before any vegetables could be planted there, he’d have to take care of those thistles. He staked a couple of goats out on the plot in hopes that they’d eat the thistles. But they preferred what grass was there. Even more, they preferred what was growing in the nearby garden, a fact proven when one of them got loose. They needed another plan. Here’s’ what he and his dad did.

First they, turned that soil over again and roto-tilled it. Then they planted alfalfa. Even though they didn’t get an early start — it was the middle of June if memory serves — it wasn’t long before the alfalfa was up and thriving. The climate where they lived in the great Northwest was cool and on the damp side. Most of the local farmers got only two cuts from the alfalfa they grew. But it was also conducive to growth over the entire season, even if it was slow growth in the last days of summer; better than having the crop go dry and give up growing all together as happens in some regions.

Within a month, again if memory serves, they mowed that quarter acre of alfalfa with its thistles poking out here and there, which stimulated the alfalfa to grow all the more. The mowed alfalfa helped smother the thistles even more but did little to stop the alfalfa. They mowed again sometime in September, raking up some of what was cut to feed to their goats.

In the early spring, they sowed what was left of the alfalfa seed, though they probably didn’t need to do it. And while some thistles could be seen coming up, they were quickly buried under the alfalfa.

After mowing it once, they turned the whole thing over in mid summer, planting some of it in late season greens, throwing in some vetch (which did well there over winter) in the other sections. What few thistles dared show themselves in the new part of the garden were quickly pulled by his children.

The following season, he planted the entire garden in squash, corn, tomatoes, and cucumbers. These heavy feeders took to the new ground with gusto, full as it was of green manure (and with a little help from his excellent goat manure compost). Thistles? Just an occasional stray.

A SAFE alternative to RoundUp®. AllDown Organic Herbicide — a 20% vinegar weed killer, plus citric acid — is the product to reach for when you’re tempted to give up or resort to chemicals. Available in a 32-oz. ready-to-use bottle or a concentrate in gallon and 2.5 gallon sizes.

Basically, a cover crop just out-competes weeds. Alfalfa is a good choice because it uses lots of moisture and nutrients, depriving the weeds of what they need. Buckwheat is also a good choice, but any nitrogen-fixing or green manure cover crop should work. You want your smother crop to return nutrients to the soil to encourage its further growth. Here’s a good source of info on cover crops and how they can be used to control weeds.

Cutting encourages growth of your smother crop, and the cut alfalfa, buckwheat, or other cover crop will help further replenish soil while doing its part to reduce weeds. According to The Gardener’s Guide To Common-Sense Pest Control, it takes as little as one season for thistle and other weed roots to deplete their nutrients and die away. And all without spraying harmful herbicides.

Choose your smother crop on the basis of the season in which you’re planting. Buckwheat and oats are a good choice for early-season, cool conditions. Alfalfa can be sown later in the spring as the soil warms. Hairy vetch is a good choice for late summer and fall planting. It over winters well and will take off as soon as the weather allows, hopefully ahead of the weeds you’re trying to beat.

Now what about those thistles that invaded his pasture? We’ve seen the same thing happen in lawns in which grass growth has slowed and is otherwise thin. Short of plowing the whole thing up, we recommend increasing your lawn’s soil health by regular spreading of compost and aerating the ground in the spring. Giving you grass a chance to crowd out perennial weeds means giving it every available ingredient it needs: organic matter, nutrients, and, yes, water. Need to conserve water, as we probably all need to do? Then turn that lawn over and plant something that will grow thickly and not require all that moisture. Any thistles or other invasive weeds that spring up? You know what to do (PDF). 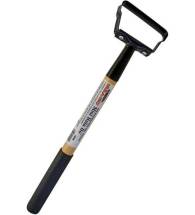 Super for small spaces! The Mini Hula Ho cuts with an easy back and forth motion. 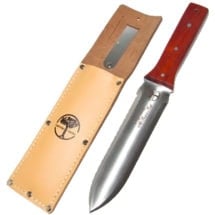 It's more than a blade — use it as a planter, digger, trimmer, cutter and more. 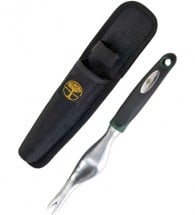