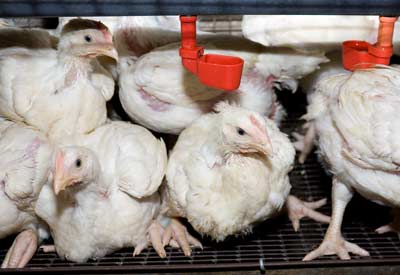 No doubt you, like us, have been following the recent news about contaminated chicken. No need to go into the details. But for those who need to catch up, Portland’s The Oregonian has done a good job covering the story and food-issue columnist Mark Bittman over at The New York Times has provided not only background but insight into the story behind the story.

The closing during the recent government shutdown of the Centers For Disease Control’s PulseNet system, which monitors food poisoning outbreaks and pinpoints causes, certainly hindered the tracking and tracing of the problem but wasn’t the reason for the problem. The Food Safety and Inspection Service (F.S.I.S.) of the Department of Agriculture (U.S.D.A.), shut down or not, doesn’t seem to be acting in consumers’ best interest. As Bittman puts it, “This is not a shutdown issue, but a ‘We care more about industry than we do about consumers’ issue.”

Proof of that resides in the fact that the culprit, Foster Farms, hasn’t been asked to shut down or even pull its product from grocery store shelves (one retailer, CostCo, took it upon itself to pull some of its chicken). If it’s true that there are 25 incidents of sickness for every one reported, then we can figure that at least 7,500 people have suffered the effect from the current outbreak, extrapolated from the 300 illnesses reported by the middle of the month.

This current contaminated chicken scare has brought some interesting facts to light. It’s estimated that a quarter of chicken sold in markets contains salmonella and that over 20 % contains Campylobacter a bacteria which causes diarrhea, cramping, abdominal pain, and fever within two to five days after exposure (it’s the most common cause of diarrhea in the U.S.). The current outbreak consists of 40% antibiotic resistant bacteria, a fact that calls into question the practice of feeding copious amounts of antibiotics to factory-raised chickens not only to prevent disease but to increase weight gain. That means that 4 of every ten people sickened aren’t being helped by antibiotics. The overuse of antibiotics in our corporate food production has been a problem for decades.

As several of my friends have pointed out, there’s never been a better time to consider going vegetarian, or short of that, avoiding anything — and that includes vegetables — raised on a factory farm. Or maybe starting your own backyard chicken operation.

What impact does this issue have on the organic gardener? Consider the rise of small, natural chicken and other meat producers. Their products, often available direct from the farmer or at farmers’ markets, offer an alternative to the mass-produced, cruelly raised, over-medicated meats produced by big agriculture. And the raising of the chickens is only part of the problem. Their processing (read “butchering”) in factory-like conditions is also questionable and, in the recent outbreak, most likely the source of the contamination.

Small scale, local processors who have better control over their packaging operations, are definitely preferable. Of course, controlling your own conditions — raising your own chickens — allows you to guarantee that your chickens have been raised properly and butchered in the most sanitary conditions possible. But back yard chicken raising isn’t possible for most of us. Buying from small producers is.

Taking control of your food is what organic gardening is all about. If you think that contamination is a problem only with meat, diary, and eggs, remember the spinach, lettuce, cilantro and cantaloupe salmonella outbreaks that occurred just last year. As food writer Michael Pollan has pointed out, any type of factory farming, including the large-scale production of vegetables, has major negative impacts.

Organic farmers and gardeners also need to take precautions. Manure plays a large role in organic growing and that means that we must know our sources, process it correctly, and apply it with care; never near produce that’s approaching harvest. We can do that because we’re in control. When we allow giant growers and corporations to have that control, we’re risking our health and the health of our loved ones. We can be responsible, even if factory farms and those who over see them aren’t. You want reasons to grow your own fruits and vegetables or, short of that, to obtain as much food as possible from small, local producers? Consider chicken.