Steamed, braised and roasted these little cabbages are a healthy favorite in recipes. 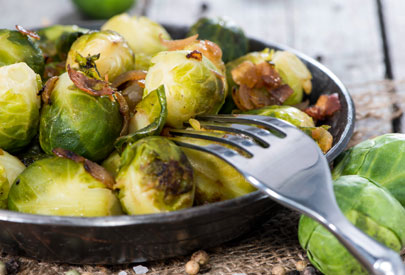 Brussel sprouts — those wonderful miniature cabbages — are both cute and tasty. The old notion of them as flabby, smelly and mushy has long-since faded thanks to homegrown and small-farm sprouts that are tight, crisp-leaved and pleasantly flavored.

Their fading, less-than-stellar reputation was based on a texture that could range from tough to soggy and the strange, sulfur like smell they can give off when overcooked. Negative traits can still be found in commercially raised sprouts that are harvested too large and then stored too long. Those picked at the peak of perfection from a home garden and cooked quickly after harvest are uniquely sweet with only a suggestion of their cabbage heritage.

The best are grown in places with cool nights. They’re picked after a light frost, something that makes their flavor more sweet and mild. Most commercial sprouts, grown in California’s central coastal valleys, don’t ever know a chill night let alone frost. Those you grow at home are just coming into their own as fall and the possibility of frost arrives.

For years, we did nothing but steam our sprouts. But they can be roasted, grilled and stir fried with excellent results. They go well with a variety of ingredients and flavors, everything from butter and nutmeg to mustard or horseradish.

View all
Planet Natural offers heirloom Brussels sprouts seeds that are non-treated, non-GMO and NOT purchased from Monsanto-owned Seminis. Planting instructions are included with each packet and shipping is FREE! Need growing advice? Visit our vegetable guides for tips and information on specific types.

In addition to the high quality vegetable fiber they provide, Brussels sprouts contain super amounts of vitamin C and vitamin K, an important component of bone health. Just 4 of the little powerhouses (about 3 ounces) give us well over our 100% of our daily recommended intake of C. They also contain significant, but smaller amounts of vitamins B1, B6 and folate, as well as potassium, calcium and manganese. Like other cruciferous vegetables including kale, cabbage and broccoli, they’re a good source of the phytonutrients recommended to prevent cancer. There’s even some protein in the tasty morsels.

Choose sprouts that are firm with tightly wrapped leaves. Golf-ball sized “bulbs” tend to be loose-leafed and tough. Anything that fits inside or through the “okay” circle you make when touching your thumb and index finger together is great. Check for weight. Dry, older sprouts tend to be light. Fresh, tightly layered sprouts will be heavier.

If you live where the growing season is cool and foggy, you may have access to small-farm Brussels sprouts. By far the best source is to grow them yourself. You’ll be able to time their planting and harvesting so that they’re in the kitchen at their peak.

Fresh, firm sprouts kept in a sealed plastic bag in the refrigerator will last at least three-to-five days, longer if they’re free of dark spots or wilted outer leaves. If you wash sprouts before storing, be sure to let them dry thoroughly. To prevent them from turning bitter, don’t store near apples, pears or other ethylene-producing fruits.

They can be easily frozen for long-term storage after a brief blanching.

If buying on the stalk — an attractive way to bring sprouts home that also offers storage advantages — look for the same, tight heads. Keep them wrapped in a plastic grocery bag in the refrigerator. The bulbs mature first at the bottom of its tall central stalk. They will be larger and should be used first. Sprouts left on the stalk seem to do better in the refrigerator than loose sprouts. Either way, use them quickly.

Trim away any visible scars or insect damage. This may require removing the first round of leaves at the bottom. Trim away the stem end. If steaming or roasting whole sprouts, score the stem with an “x” to help it cook at the same pace as the leaves.

Steaming or boiling has always been a fine way to cook sprouts as long as they’re not overcooked. Check them after five minutes of boiling with a fork and every few minutes thereafter.

Grilling on the stove top yields fine results that requires only a little oil, moderate attention and deft spatula technique. Cut sprouts in half to encourage even cooking and the soaking up of flavors. Small sprouts may be sauteed whole and benefit from quick braising.

Braising in various liquids — vegetable broth or coconut milk — after a brief saute in non-GMO canola oil with a dusting of curry powder makes our little green friends exotic.

Roasted brussel sprouts are extremely popular now and for good reason. Browning and roasting brings out the sprouts’ crispy side which is remarkably tasty, even when charred. Halve sprouts and put flat side down on a cast iron or other oven proof pan on medium heat. When the sprout starts to brown on the bottom, stir well and place in an oven preheated to 400 – 425 degrees. Sprouts will cook quickly and should be checked and flipped every five minutes or so. More cooking brings out the roast flavor and adds a bit of crunch. Insides should not be too soft.

No matter how you prepare them, the finished product goes well with pearl onions, nuts of all kinds, marjoram, caraway seeds and yogurt sauces. Not all seasonings that go with steamed sprouts go well with grilled or roasted sprouts (mustard is an exception). Steamed sprouts are especially good with a white sauce that contains a pinch of nutmeg. Anchovies are a wonderful accompaniment to roasted sprouts. Anchovies and steamed? Not so much.

The University of Illinois Extension includes tips on storage and preparation at the end of their informed guide to the cute vegetable.

Browned and sweet, these look good next to a scoop or two of bright, yellow squash.

Place the sprouts, butter, stock and salt in a lidded skillet and bring to a boil. Turn down heat, cover and simmer for five to seven minutes or until sprouts are easily punctured with fork. Uncover and continue simmering adding brandy as liquid cooks down (be safe: watch for flaming when adding brandy). Allow sprouts to brown as liquid cooks down. Dish is done when sprouts show brown and golden and sauce has thickened. Add black pepper, if desired, before serving.

Note: You can substitute tamari or other soy sauce for the brandy; also molasses which should be added just before finishing the dish.

Brussels sprouts add a bright green touch to this deli favorite. Vary the amounts suggested here to get the balance to your liking. Sauteing the sprouts with a touch of olive oil for a few minutes over medium heat before adding them to the broth helps preserve their wonderful color.

Rinse the barely until the water runs clear and set aside. In a stock pot or cast-iron Dutch oven, melt the butter over medium heat, then add garlic, shallots and onions. Cook until softened, about five minutes. Add mushrooms (dried mushrooms should be reconstituted in water just to cover for at least one hour; small amounts may be added dry with the broth). Add more butter as needed. When the mushrooms have darkened, turn up the heat and add the sprouts, sauteing all ingredients for a minute or two. Add the broth and bring almost to a boil before turning the heat down to simmer. Add salt, pepper and bay leaf and simmer until the barley is cooked, about 45 minutes. Suggestion: any number of other vegetables can be added to this soup, including celery, carrots, cabbage, kale, even turnips and sweet potato (but not yams; serve those on the side). Stir-fry any addition with the onions and mushrooms to help them retain flavor and texture.

The grain-shaped pasta makes for a nice, springy texture when baked in all this creamy goodness. But you could just as easily make this casserole with elbow macaroni, penne, brown rice or barley and vary with additions of mushrooms, walnuts, sauteed red or green peppers, even sun-dried tomatoes (reconstituted or in oil) turnips as you like. The crusty top of grating cheese and breadcrumbs makes this classic.

Roast the sprouts: In a cast iron or other oven-safe pan, heat the oil over high heat until it begins to smoke. Reduce heat to medium. Carefully place sprouts, cut side down, in hot oil, cooking until they begin to brown on the bottom. Flip sprouts as possible (a good stirring is fine) and place pan in oven for 10 -15 minutes or until sprouts begin to blacken in places. Take from oven and allow to cool.

Reduce oven temperature to 350 degrees. Pour cooked orzo into prepared casserole dish and stir in onion, Gruyere cheese and salt. Pour cream over mixture. Fold in sprouts. Sprinkle parmesan and breadcrumbs over the top of the casserole and dot with remaining butter. Baked covered for 20 minutes. Remove cover and bake for an additional 15 minutes or until topping turns golden and bubbly.

Not a vegetarian? Adding some crisp bacon to the casserole makes it stand-out.

One Response to “Brussels Sprouts Recipes”