Everything You Need to Know About Black Currant 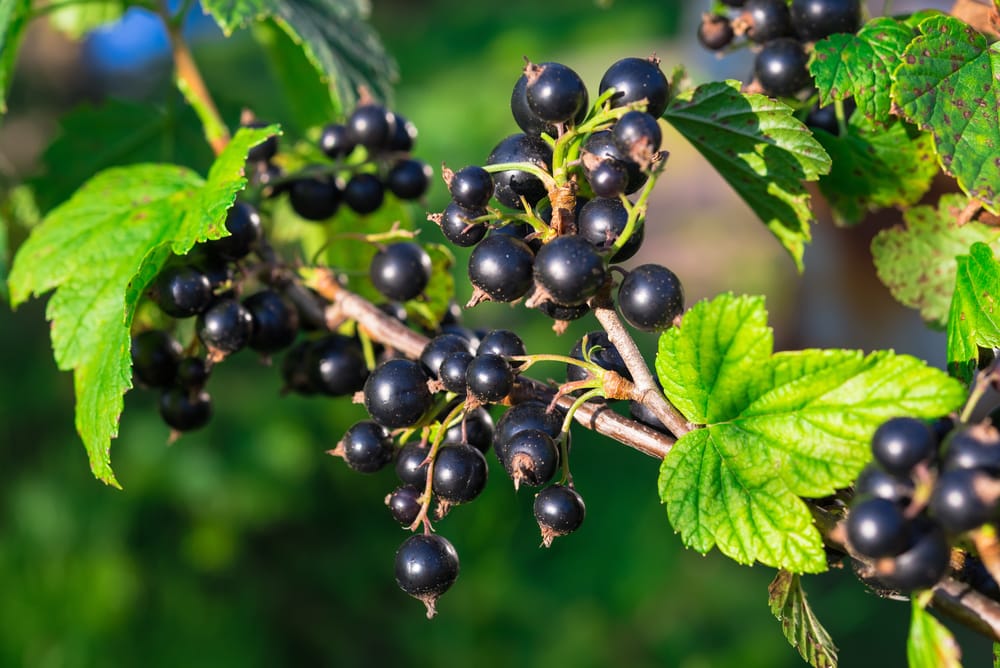 What is Black Currant?

Black currants (Ribes nigrum) are woody shrubs that are native to Europe and Asia and introduced to the Americas back in the 1800s. This plant is part of the Gooseberry family and comes in many different varieties.These berries grow on the shrubs throughout the summer and can be picked and used for cooking, drinks, and herbal medicine.

The black currant grows to become a medium sized shrub, only around 5 feet in size. This plant blossoms in strigs and is pollinated by insects. By the middle of summer, the shrub bears fruit and the green berries ripen into edible, glossy, purple berries. Each shrub has the potential to produce up to to 10 pounds of fruit a year.

These shrubs are relatively hardy and can survive the winter months. They are usually planted in the fall or winter so that growth can start in the spring. These plants are susceptible to many diseases and also have the potential to spread fungus. This is why most Americans are not familiar with black currants. However, once harvested, they can be great with many savory or sweet dishes as well as jams, syrups, and alcoholic beverages.

Black currant is a shrubby plant that produces small ⅓ inch, deep purple berries. These shrubs grow in clusters a few feet high. The leaves of these shrubs are light green and have rounded tips. Unlike many other berry-producing shrubs, black currants do not have thorns along the stems and the bark of the shrub has a rough texture.

Black currants have a strong, tart taste due to the high levels of tannins. These berries have strong, earthy tones. People describe the taste as grape-like flavor and are acidic to taste with hints of cherry. When dried, black currants contain hints of vanilla and wildflower. They are sweeter when eaten dried.

What is Black Currant Good For?

Black currants are nutrient-rich berries and oftentimes have beneficial effects on the body. Raw black currants have high levels of vitamin C as well as iron and manganese. These berries have plenty of antioxidants that help strengthen the immune system and treat minor health illnesses such as sore throats or symptoms of the flu. In addition they have antimicrobial, anti-inflammatory, antiviral, and antiseptic properties.

Black currants can be used in a variety of recipes and dishes. These berries are an acquired taste for many people due to the sourness it has but, when mixed with other ingredients, has potential for many uses and tastes.

Black Currants are commonly used to create jams, compotes, and syrups. These berries are usually not eaten fresh and are mixed with other fruits.You can find them combined with apples to make apple crumble or with other types of berries to create sweet desserts like gelatin, popsicles, or pudding.

Another good use for black currants is surprisingly in savory dishes. These berries have deep hints of acid and red wine that compliment game meats well. You can find them used in dishes that include meats such as duck, venison, or pork.

Finally, black currants make for great pairings with drinks whether in teas or alcoholic beverages. They have a full-bodied flavor, similar to that of wine. This makes them great for a variety of mixed drinks. You can experiment with the taste of black currants in mojitos, liqueur, or cocktails.

What are Black Currants called in America?

Black currants are known by many names such as blackcurrant, cassis, or their official species name, Ribes nigrum. In America, they are still referred to as the separated version, “black currant” as well as red or white currant or just currant. These naming conventions can be confusing to many as they can be mistaken for raisins.

Is Black Currant Illegal in the U.S.?

Black currants are not currently illegal in the United States. This fruit was banned long ago due to the issues they were causing to plant life around the country. But, it is making a comeback in many states and slowly being introduced again to the diet of many Americans. States have begun repealing the ban on black currants due to the high levels of vitamins they provide humans.

States like New York lifted the ban in 2006 and have allowed many farmers and black currant producers to begin developing new products. Other states, like Florida have more technicalities surrounding black currants. While they are allowed in the state based on the fact that they don’t host fruit flies, they are still banned from entering the United States if being imported from certain countries like those in the European Union. Special permits have been issued for countries like Chile to move black currants into the United States. Outside of these regulations, black currants are free to move into the country.

Obviously, there are a variety of guidelines regarding where black currants are allowed to be and come from. It’s best to check with the local government or the state’s Department of Agriculture for more information regarding black currants.

Why is Black Currant Illegal in the U.S.?

Black currants are not illegal in the United States anymore but, in the past, was banned for almost a century when pressure was put on lawmakers by the logging industry. These berries had been widely grown throughout the country after being introduced to the environment by Europeans. Farmers grew over 7,000 acres of currants along with other berries within the Ribes species.

It wasn’t until the 19th century when scientists discovered that black currants spread fungus that were capable of damaging pine trees.This parasitic fungus was known as blister rust. It was thought to have spread through black currants by using it as an intermediary host. Chemical sprays were implemented to rid the fields of these berries. These berry shrubs were then banned from being allowed in the United States.

Europe did not face the same problems as America did. The major factor in this was the commercial pine tree plantations that were common in the states. In the 1800s, the United States was rapidly cutting down pine forests for timber which led to a massive decline in stock that tree nurseries could not keep up with. This is when farmers turned to cheaper options offered by seeds from abroad which is what began the cycle of the parasitic fungus.