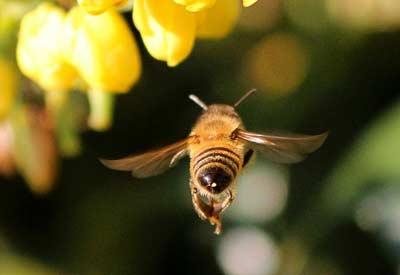 Two-breaking stories on bee decline, pesticides and politics. The European Union has imposed a two-year ban on the use of certain pesticides linked to bee deaths. This comes after a report citing three specific pesticides from a group known as neonicotinoids as a major cause in the decline. Chemical manufacturers — specifically Germany’s Bayer and the Swiss Syngenta — fought fiercely to stop the ban. Some 300,000 people in the U.K. signed a petition supporting the ban. Even with that, the British Parliament  voted to side against the EU plan.

Second story: Here in the U.S., the federal government released a study citing a variety of reasons for bee decline. In addition to pesticides, mite infestations, lack of nutrition, and genetic variation all contribute according to the study. The study was seen as a response to the EU’s banning of certain pesticides linked to bees deaths. “At E.P.A. we let science drive the outcome of decision making,” said Jim Jones, the agency’s acting assistant administrator for chemical safety and pollution prevention. “There are non-trivial costs to society if we get this wrong.”  Translation: Risking our entire population of honey bees is trivial in the face of losing a few dollars for big chemical and agricultural companies.

You can just hear chemical-soaked, agri-business breathing a collective sigh of relief because there might be other reasons for the decline in addition to pesticides. Notice that the article in reporting the study in Farm Futures, the mouthpiece for “large scale, high income farming” (their words, not ours), doesn’t use the word “pesticides” again after a cursory mention of the factors. And when it comes to recommendations? Pesticides? Nothing to see over here. Can you say fair-and-balanced… not?

Here’s a broader look from Environment News Service including a photo of a honeybee with a mite square on its back. As any beekeeper will tell you, mites are a continual problem in some areas. What’s not stated in this study is that mites have developed a resistance to the chemicals used to control them. In the world of non-organic farming, the solution for one problem is really just the creation of another, larger problem. There are natural ways to control mites, including dusting bees with powdered sugar, using “drone combos” (a specially designed bee frame), and, in the case of large infestations, finding and separating the infested hives; or destroying them if necessary.

Or maybe it’s the high fructose corn syrup? Another factor not mentioned in the bee decline study is the use of honey substitutes in hive feeding. Turns out that these manufactured products — can you say processed food? — don’t provide the enzymes that boost bees’ immune and detoxification capabilities. These enzymes come from the pollen and other components of flowers that cling to bees’ legs as they work flowers. Without them, bees are more susceptible to disease, pests, and the rigors of drought and other climatic factors.

Permit your friendly and concerned Planet Natural Blogger some editorializing here. Can we see the decline in honeybees as a larger symbol — a warning — about chemical intensive, profit-at-any-cost corporate agriculture? Is this an example of simple chemical fixes leading to larger and potentially catastrophic problems? Can we trust chemical corporations and their minions in government to consider our best interests? Is there a lesson for humans in the feeding of high-fructose corn syrup, a heavily processed, manufactured product, and the results it has on bees? What’s wrong with natural, organic farming techniques? Just asking…