Documentary film on master gardener Paul Gautschi's got the spirit. 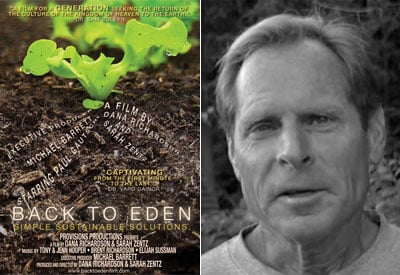 In the battle over what constitutes healthy food, it’s no longer surprising to see the documentary film as an effective weapon, most often deployed on the side against corporate agriculture and for public health and well-being. Films including Food Inc, 2004’s Supersize Me, a month of nothing but McDonald’s, and most recently Fed Up which implicates a government-corporate collaboration to promote and reward refined sugar, are all convincing, visual arguments of the dangers of the commercial food culture.

Broadly about food, these films are specifically about processed foods, organic and locally raised farming, the health consequences of certain refined foods and fast-food diets. Related films include GMO/OMG , a study of the corporate takeover of farming through seed production, GMOs, and related pesticides. Now even documentaries championing organic gardening are getting into the act.

One of the better gardening films is 2011’s Back To Eden from producers/directors Dana Richardson & Sarah Zentz. It’s the first film that I know of that makes mulch a superstar.

Back To Eden is about Paul Gautschi, called a “garden evangelists” by one person in the film, a man whose enthusiasm is as great as any you might have seen even though it’s directed at such a non-enthusiasm generating subject as garden mulch. God is the real co-star in this film, the designer of the original sustainable landscape whose secrets are there for those looking to find them. “God is a good guy,” Gautschi states at one point. “He gave us a sweet tooth.”

That secrets revealed to Gautschi start in a visit to the forest. There he discovers trees growing from a wonderful carpet of compost and organic matter. He decides to recreate those conditions in his garden. Follow up lessons from on high include how deeply and in which layer to plant seed (in the soil, not the mulch on top) and that big wood chips will exhaust the soil of nitrogen as they slowly break down.

What Gautschi does is keep his soil protected under a layer of composted chips, shavings, and sawdust. And this results in something of a Xeric miracle. He never waters either his fruit trees or his vegetables. And he gets superb harvests. The general idea is similar to the technique of sheet composting, otherwise called the “no-dig” method. Gautschi claims to use nothing but a rake — not a spade, not a fork, not a hoe — in his garden.

Gautschi is also expert at composting. He includes nitrogen-providing greens to his wood chip browns and adds some manure, just as he did with his dad’s garden when a kid. He shows why adding a bunch of organic material to soil results in hard-pack at the end of the season. Hint: the answer has to do with having a variety of different-sized material in your compost to help hold oxygen and moisture.

Now it’s true that Gautschi has some regional advantages working for him. He lives on a homestead above Sequim, Washington on the state’s Olympic Peninsula. There’s plenty of wood chips and sawdust available because of the area’s abundant forests. A timber mill brings it in by the truckload and even though its in the “rain shadow” caused by the mountains wringing moisture from the clouds passing over them on the way to Sequim, it still gets some 16 inches a year. The cool, often cloudy climate helps keep evaporation down.

Yet his garden truly is a miracle and his method above reproach. We’d do some things differently. He keeps wide rows between his plants so that he can run the roto-tiller through. We’d mulch narrow paths between our vegetables and hope that kept the weeds down. And we’re curious about any pH adjustment he might do. He mentions pH balance among his principles at the beginning of the film but doesn’t address it later. Knowing soil conditions in the Great Northwest with its abundance of cedar and fir needles, we’d guess he’s throwing a lot of lime into his compost to keep the acid down.

Still, in a garden -specific way, this is a very charming and inspiring film. Mulches are important but there is a proper (and simple) way to use them. Gautschi himself is the most entertaining component of the film. His enthusiasm is contagious — “it’s like over-the-top-awesome,” he describes the taste of one vegetable — and his spiritual connection to his garden becomes something of a metaphor. The filmmakers have given us a fascinating look at this curious personality, a look you can enjoy even if you’re not of the same persuasion.

The film is available for free viewing online at the Back To Eden website above. Let us know what you think. I’m especially interested in people’s experience with mulch, what you use and where you get it. Water savings? Now that’s something we’d really like to hear about.

One Response to “Mulch Hits the Big Screen”