Save energy and money by reducing indoor building temperatures with a white roof. 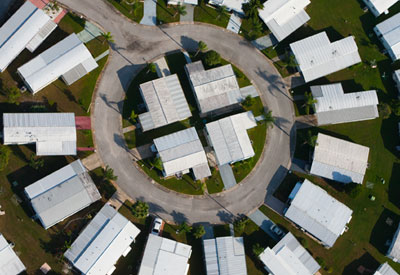 Cities are heat sinks. Their black asphalt parking lots and tar-black rooftops absorb the sun’s energy and give off the heat. The result, says the White Roof Project, is as much as an 80-degree difference on sunny-day roof tops, as black roofs absorb the light and white roofs reflect it back into the atmosphere.

White roofs can help keep building temperatures as much as 35 degrees cooler, saving huge amounts of energy and money spent on air conditioning.

All this heat gathering has earned both big and modest cities the designation as “urban heat islands.” The White Roof Project is trying to do something about it. Their solution is simple. Paint all those black roofs white.

This seems like an obvious solution. It’s a common practice in warmer parts of the world and has been for as long as there’s been white wash. It only makes sense that today, in a time of rising temperatures and fluctuating energy costs (not all of them in dollars), that we would want to make sure our roofs don’t add to the problems.

The White Roof Project, employing donations and volunteer labor, claims to have painted a million square feet of rooftops across the country, often in poorer urban areas.

Commercial builders are also realizing the benefits of white roofs. A 2010 study showed that white roofs on new construction not only reduced cooling costs but helped reduce the emissions of greenhouse gases.

Homeowners especially in warmer climates, have also embraced the white roof movement in attempts to lower cooling costs. Lower cooling costs means lower energy use, a win for both our pocketbooks and the planet. Roofs don’t necessarily have to be white to be reflective. Gray, cream, even red will direct more energy back into the sky than a black roof.

It’s been pointed out that white roofs have diminishing returns the further north one goes. It’s suggested that at some point white roofs, absorbing less energy in the winter, would increase heating costs. Still, cities as far north as Chicago and New York have seen energy savings with reflective roofs.

A pair of scientists from Stanford University have suggested that all the reflected light from roofs will prevent cloud formation. Clouds reflect large amounts of sunlight back through the atmosphere. The net effect of this cloud loss could cause surface temperatures to rise.

The same scientists also suggest that the light reflected from roofs will be captured by pollutants in the atmosphere, thus raising air temperature. The full study can be found here (link no longer available).

Of course, there will be fewer black pollutants (carbon) in the air if less energy is generated. The White Roof Project says that Los Angeles requires three power plants to produce the energy needed to offset the city’s heat island effects.

Lowering the temperatures in apartment building, hospitals, and nursing homes with white roofs can save lives. The White Roof Project points outs that nearly 16,000 people died from heat related cause between 1970 and 2004. Lowering building temperatures 20 to 30 degrees would have gone a long way to sparing many of those lives.

No matter what the actual contribution of white roofs in reducing the urban heat island effect, a reflective roof can grant homeowners temperature reduction and reduced air conditioning costs especially where summers are warm. One house may make only a small contribution in energy savings and greenhouse gas reduction. But a long journey is made of countless small steps.