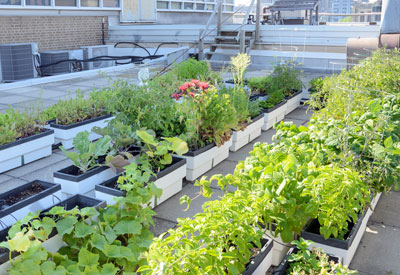 All those big malls that were built in the 1970s and 1980s? You know, the kind that had a big anchor store or two and many, many often smaller retails outlets, a multi-plex movie house, and a food court? They’re beginning to close — completely — in growing numbers.

Some two-dozen have closed across the country since 2010 says the mall tracking group Green Street Advisors. Robin Lewis, co-author of The New Rules of Retailing, has predicted that at least 30% of the behemoth retail complexes will close in the near future. What to do with all that empty space?

How about using them to grow urban farms and gardens?

That was Vicky Poole’s idea for the failing Galleria At Erie View in Cleveland. Poole, the Galleria’s marketing and events director, who worked on her grandfather’s farm as a child, decided that the Galleria’s large, glass, domed ceilings looked like a greenhouse. So she proposed that where once shoppers strolled between clothing outlets, jewelery shops, and sporting goods stores, she would start growing greens, herbs, and tomatoes for sale to families and restaurants. The garden would draw customers to the few businesses that remained.

Poole envisioned bringing school and other groups to the Galleria to learn about growing vegetables and sustainability. She coordinated a local restaurant’s fresh produce needs with what the project would grow. She got a local distributor of organic mulch to donate to the cause. A visiting student suggested they should try growing with aeroponic systems.

The place was set to become a working farmers market.

Poole raised grant money to get the project off the ground. She hoped that volunteers would do the growing. The first plots, two 6 x 12 foot raised beds, went in during 2010.

But by 2012, the “Gardens Under Glass” project was on hold. Poole was unable to get enough, consistently involved volunteers. Funding for maintenance was slow in coming. She repositioned the mall as a community gathering spot which now includes a museum, public sculpture, offices for the local Bar Association, and even an ESPN broadcast center. Local vendors ply their wares in the hallways. The local YMCA has moved in and the Galleria continues to host a lively food court.

In a continuing effort to promote sustainability, Poole has planned to bring the building LEED certification.

All this is well and good. And it points the way for wise-use of commercial spaces that no longer can sustain themselves with the usual stores and shops of urban malls. But what about supplying fresh, locally produced, organic produce for those restaurants? Nothing brings people together like gardening.

Urban farming, usually on roof tops or in greenhouses, is a booming endeavor in our cities. It’s become so prevalent that one online, urban-oriented web site as even listed their “Top Five” urban rooftop gardens. These kinds of gardens are often undertaken as commercial projects, like this one in Brooklyn. Often, they’re community projects, like this one on top of a parking structure in Seattle. Often their focus is education, as is this rooftop garden in Cincinnati. Some help feed the hungry.

There are even companies dedicated to building rooftop gardens across the country. Check out this rendering.

For years, more and more agricultural land was lost to urban development. Mall construction was a big part of that. Now it looks like agriculture is gaining some of that land back and bringing gardeners, both new and experienced, together. It’s a trend we can get behind.

Know of a rooftop garden somewhere in your town? Let us know.