Palmetto Bug Or Cockroach: Differences & How to Kill Them 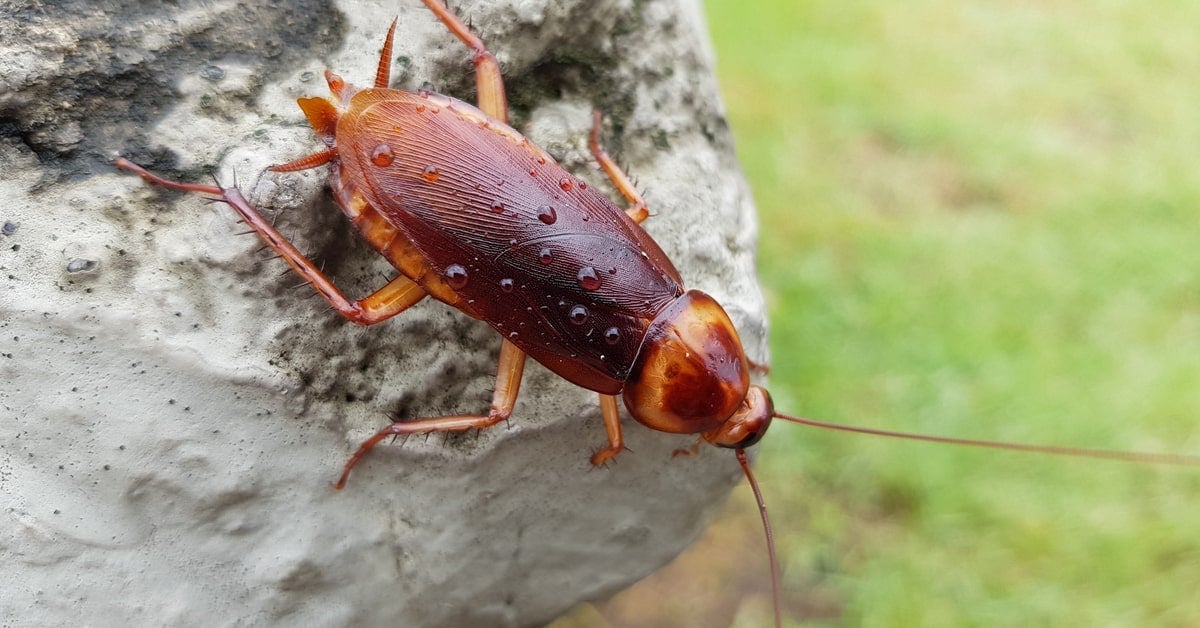 A palmetto bug is a  common name used to describe various different types of cockroaches. Read on to learn everything you could ever want to know about them (including how to stop them before they take over your home).

What Is A Palmetto Bug?

The term palmetto bug can refer to three species of cockroaches, depending on where you live.

Why Is It Called A Palmetto Bug?

Palmetto bugs frequently live in palmetto trees, a tropical plant that grows in the southeastern United States, including Florida and South Carolina. The palmetto bug also lives in other places where there is moisture and the rotting vegetation and wood they feed on.

What is the difference between a cockroach and a palmetto bug?

The term “palmetto bug” is used for three types of cockroaches:

While cockroaches are beneficial insects outside that provide food for animals and break down decaying wood, they are a pest inside the home that can spread salmonella and contaminate your home with pathogens and bacteria.

Because these pests often live in palmetto trees, the nickname “palmetto bug” stuck, even though they may live in other places.

The adult American cockroach grows to be 1 1/2 – 2 inches long. It is reddish-brown and has shiny wings. It can fly, although it usually glides down from higher surfaces to lower surfaces.

These roaches, like all roaches, have six legs and two straight antennas.

Woods cockroaches grow to be 1 1/2 inches long and 1 inch wide. They do not have developed wings and are rather slow-moving. 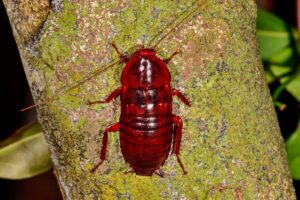 Lifecycle of a Palmetto Bug

All roaches have a common lifecycle. However, the length of time between the egg being laid and the adult dying varies.

The American cockroach female lays sixteen eggs at a time in a purse-shaped case called an ootheca. The ootheca is brown when laid but turns black in a day or two.

The female glues the ootheca under surfaces near food to keep her eggs safe. Palmetto bug females lay about one ootheca a month and up to 150 eggs during their lifespan.

The eggs hatch in 50-55 days at room temperature. The nymphs, or baby palmetto bugs, go through 10-14 instars or periods of growing between molts, over 400-600 days before becoming adults.

The nymphs are grey-brown at first but become more reddish-brown with each molt. These large cockroaches are the largest you will find in the United States.

Florida wood cockroaches develop from egg to adult in about 150 days. The nymphs go through an average of seven molts before becoming a dark mahogany adult.

Later nymph stages have yellow lines on the thorax. Smoky brown cockroaches lay about 10-14 eggs at a time. The nymph is black during its first instar (time between molts), then brown in the next one. The nymphs are increasingly reddish-brown as they pass through 9-12 instars. 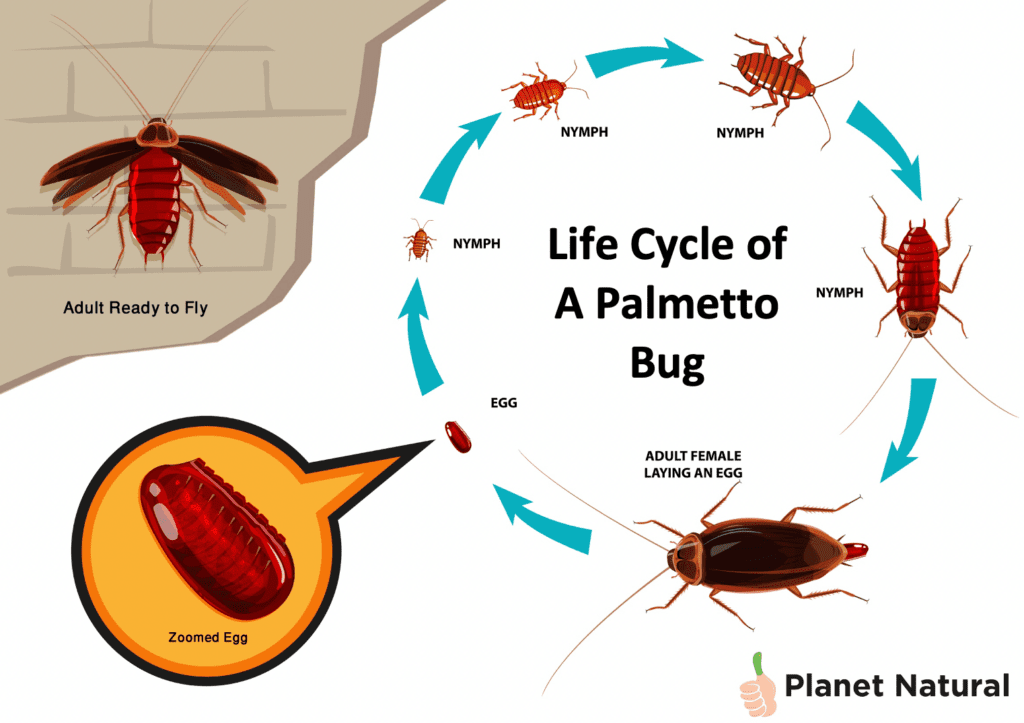 What Is the Lifespan of a Palmetto Bug?

Growing from an American cockroach egg to an adult may take as long as 600 days. The adult may live as long as another 400 days, so the average lifetime lifespan is about 1,000 days.

Where Do Palmetto Bugs Live?

Palmetto bugs live around houses and other buildings in leaf litter, in the base of palmetto trees, and in the fan-like leaves, under logs and other decaying plant material, shingles, and other warm and humid areas. They may also infest tree holes.

When inside, these pests like to stay in warm, humid areas of the house, usually around the hot water heater, bathroom, and basement. Instead of tree holes, they live in cracks around kitchen cabinets, bathroom cabinets, electrical plugs, and other places around the house.

All roaches are nocturnal and spend most of the day in cracks and crevices before coming out at night to find food scraps.

Strictly speaking, palmetto bugs do not make nests. They lay their eggs in egg cases and glue them close to food supplies. However, Palmetto bugs congregate in large numbers in dark, warm, humid areas. In houses, that is often the basement, bathroom, or near the hot water heater.

What Does a Palmetto Bug Eat?

American cockroaches, however, eat almost anything. They love the same foods most people do, including meat, grease, sweets, and starchy foods.

When food is scarce, they even eat each other.

Both American and smoky cockroaches live in sewers and septic tanks. They pick up dangerous diseases such as salmonellosis, typhoid fever, cholera, gastroenteritis, dysentery, listeriosis, giardia, and E. coli infection.

According to the Environmental Protection Agency, palmetto bugs spread these diseases when walking over food preparation areas and utensils. They contaminate food by walking on it, urinating on it, and defecating on it.

When they contaminate food, it is not safe to eat anymore.

Cockroach feces, urine, eggshells, and shed skins become dust and cause allergic reactions and asthma attacks, especially in children. In fact, according to the Asthma and Allergy Foundation of America, children who have asthma and are exposed to palmetto bugs are hospitalized with asthma attacks more often than children who are not exposed to palmetto bugs.

Smoky brown cockroaches secrete fluid from a gland on their abdomen when they are afraid. The cockroach can squirt the fluid up to three feet away. Because of this, the other nickname for this bug is “stinking cockroach”.

In addition to smelling bad, the liquid causes skin irritation, so don’t touch this roach without gloves on.

Palmetto bugs can serve as an intermediate host for parasites that infect dogs and humans. These include whipworms, the giant human roundworm, pinworms, tapeworms, and hookworms. These are shed in their feces and can then infect the dogs and people in the house.

Signs of a Palmetto Bug Infestation

Since palmetto bugs are nocturnal, they can often avoid detection for some time. Here are some typical signs that you have these pests in your home:

Here are some things to remove from your house and yard to avoid these bugs from moving in:

Messy yards and homes attract them. Tallgrass, lots of dead branches on the ground, leaf litter, and other trash in the yard give them places to hide.

Water leaks attract palmetto bugs because they need to drink water each day to stay hydrated. Broken sewer pipes not only give them access to water but also food.

Water leaks, improper food storage, food spills, pet food, and trash give them food and water inside. Clutter gives them places to hide during the day.

How Do I Keep Palmetto Bugs Out of My House?

It is much easier to prevent palmetto bugs from coming into your house than to treat an infestation of these pests. The best way to prevent these bugs from entering your house is to practice sanitation and exclusion.

The goal of sanitation is to deprive the palmetto bug of food, water, and shelter. Here are some tips on doing that.

Exclusion keeps palmetto bugs from getting in the house in the first place. These tips will also help you keep other pests from entering your home. Remember that a palmetto bug can crawl through a space the width of your credit card.

How Do I Kill a Palmetto Bug?

Palmetto bugs can be tough to kill. If you must practice pest control to get rid of these pests, be careful.

Because the bugs wedge themselves in such tight cracks, palmetto bugs are often safe from bug bombs. Since these products can be hazardous to you, your family, and your pets, they are not recommended.

It is better to use an organic approach to pest control. Borax is an effective organic way to kill palmetto bugs.

Mix 1 part borax with 1 part powdered sugar and spread it in places the palmetto bugs hide, such as under the sink, behind appliances, and around the hot water heater.

Spreading the powder on baseboards, walls, and counters is not recommended, as palmetto bugs do not spend much time there. The powder should not be used where people or pets can get to it or where you prepare food.

Make sure you do not breathe any of the dust, wear a facemask when spreading it.

We get the same questions from many consumers about palmetto bugs. Here are our answers.

What is the difference between a German cockroach and a palmetto bug?

Yes, they can. Palmetto bugs only bite if there is a heavy infestation and there is not enough food to go around. They may also eat food residue off of the faces of sleeping humans.

What is a natural repellent for palmetto bugs?

Mint oil has been shown to repel palmetto bugs. It does not kill them and is not a substitute for other pest control methods but can help keep palmetto bugs from infesting a structure. It can be one part of the precautions you take to keep your house safe from palmetto bugs.

Do palmetto bugs come through drains?

Yes, palmetto bugs can come through drains. When they do, they bring sewage into the house on their feet.

No, palmetto bugs do not hiss. The Madagascar hissing cockroach (Gromphadorhina portentosa) is the one you are thinking of.

That depends on what cockroach species you are calling a palmetto bug. The Florida woods cockroach does not fly. The American cockroach, which is often called a palmetto bug, is capable of short gliding flights. The smoky cockroach is a capable flyer.

Actually, palmetto bugs spend a lot of time grooming themselves and are pretty clean. The problem is they frequent sewers, septic tanks, garbage cans and pipes and then tract the nastiness into your kitchen, bathroom, and other places you frequent.

Can palmetto bugs make you sick?

Yes, as mentioned above, palmetto bugs carry a number of serious diseases. They spend time in sewers and then walk across your food, defecating and urinating on what they do not eat. In addition, they track bacteria across the counters you prepare your food on and the utensils you use when cooking.

How do you catch a palmetto bug?

Palmetto bugs are hard to catch. These pests run fast for their size, up to 3 miles an hour, and can squeeze into cracks the width of a credit card. It is also hard to sneak up on a palmetto bug because they are very sensitive to vibrations. When you walk, they feel the vibrations you make and flee.

Is there a palmetto bug season?

Are water bugs and palmetto bugs the same thing?

Yes, a water bug and palmetto bugs are the same insect.

What states do palmetto bugs live in?

Palmetto bugs live everywhere there are humans. The Florida wood cockroach lives in Florida and the parts of Georgia, Alabama, and Mississippi that touch Florida. Smoky brown cockroaches came to the United States from Cuba and entered Florida. Now they live anywhere it is hot and humid with mild winters, including most of the southeastern United States. The American cockroach originated in Africa but has spread all over the world on ships and then as stowaways on the wares merchants sell.

What state has the most palmetto bugs?

There is no data to claim any one state the palmetto bug capital of the country. In general, the southern states have the most cockroaches, along with California.

What happens if a palmetto bug bites you?

Palmetto bug bites can cause welts and itching. If you are allergic to palmetto bugs, you could have a serious allergic reaction.

Water Bugs: What Are They Exactly and How to Get Rid of Them