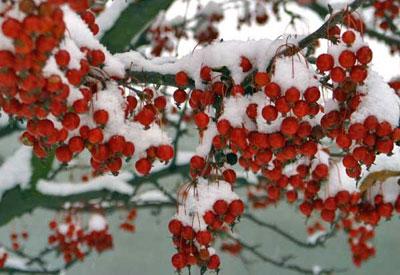 We had the first snowfall of the year here in Northern New Mexico this weekend. The mountains are blanketed and long patches of the white stuff remain in the shadows of the pines and junipers here at the relatively modest elevation of 7,200 feet. Of course, further north in the Rockies, they’ve already had plenty — thanks, Brutus — as well as in the plains. New England has been covered in white just a week after hurricane Sandy brushed the area. The upper midwest? They saw their first snow a month ago.

While first snow accumulations signaling the end of another season can trigger a sense of melancholy in outdoor gardeners, others take solace in the beauty of their snow-draped landscapes. It’s important to remember that snow has valuable benefits for your lawn and garden. It’s insulating factors help protect tender roots from hard freezes. Some bulb plants love a blanket of snow for their winter sleeping. An early snow makes it easier to harvest those remaining root vegetables than it would be if the ground froze solidly. Snow will provide needed moisture to the soil when it melts even if that melting doesn’t come until spring. And it gradually releases moisture into the ground, a process that some trees, especially evergreens, require during the long winter.

Surprisingly, snow also adds nitrogen to soil. One source claims that as much as five pound of nitrogen is brought to the ground in snowfall, though we wonder how much snow is required to do this. Your curious Planet Natural Blogger doesn’t understand the process but it’s said that nitrogen is fixed to moisture by lightening. We always knew that scary thunder had a purpose. Sulfur and other nutrients are also brought to earth by moisture. We just hope that the sulfur’s source isn’t the coal-fired electric plant that’s upwind of here.

Anxious to get a jump start on gardening once that snow starts melting — as it surely will — sometime next spring? Raised beds can be shoveled off and will dry out earlier than the ground around it. If you plant crops that can take a little late season snow and cold, you might just have peas to harvest ahead of your neighbors. If you plant cold-hardy greens in the fall — kale is perfect — then mulch, an insulating blanket of snow will protect your plants until March and you’ll really have a jump on the season. Unless it gets too cold where you are. But it’s worth the chance. Gardeners maybe more than anyone else, well know… hope springs eternal.